The Central Bank of the Russian Federation and the Real Casa de la Moneda have each issued collector coins which highlight Russian culture and heritage in Spain. The featured design is the collaborative work of both A.V. Baklanov (Bank of Russia) and Begona Castellanos (Real Casa de la Moneda).

Ties between the kingdom of Spain and the Grand duchy of Moscow were established as early as 1519 when emissaries were exchanged between King Carlos I and Grand Duke Vasili III. Permanent embassies for the two countries were eventually established in 1722.  Since the re-establishment of full diplomatic relations with the USSR in 1977, Spain and Russia have experienced more than three decades of close friendship and productive exchanges. Though the Russian community is less than 1% of Spain’s total population, their contribution to the performing arts is widely regarded in Spain and this aspect is featured on the reverse design of the coin. 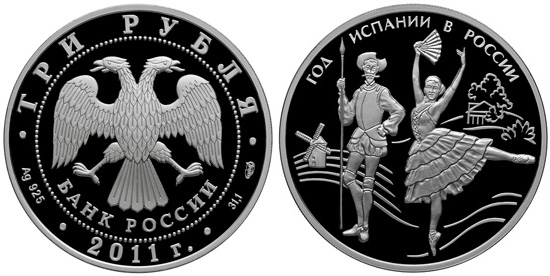 The Russian example of this dual numismatic issue includes Central Bank’s emblem, that of the two-headed eagle with wings extended. Below the emblem is the text “БАНК РОССИИ” (BANK OF RUSSIA) framed by a circle of dots with the denomination’s inscription along the top “ТРИ РУБЛЯ” (THREE RUBLES). To either side of the year “2011” are inscriptions of the silver metal’s fineness (925) and weight (31.1) along with the mint mark of the St. Petersburg facility.

The reverse includes the relief of a medieval knight with spear, (Don Quixote) and to the right is a dancing ballerina with fan. In the background to the left is a windmill and to the right is an outline of a building and trees. Above the coin’s main design is the Cyrillic text “ГОД ИСПАНИИ В РОССИИ” (The Year of Spain in Russia).

Struck in proof quality, the coin has a diameter of 39 mm and a total mintage limit of 5,000 pieces. For more information on this coin, please visit the website of the Central Bank of the Russian Federation at: http://www.cbr.ru/eng/bank-notes_coins/base_of_memorable_coins/coins.asp?cat_num=5111-0219

The obverse of the collector coin issued by the Real Cada de la Moneda portrays a likeness of H.M. King Juan Carlos I, along with his title in Spanish and the year of issue “2011” under the King’s profile. The reverse features the motif depicting an image of Don Quixote and of a ballerina from the Russian Ballet. Above the primary design, the text “AÑO DUAL ESPAÑA – RUSIA” (Dual year, Spain – Russia.

The coin is struck to proof quality and is produced in sterling silver with a weight of 27 grams and a diameter of 40 mm. The coin’s face value is 10 EURO and a total mintage of 7,500 pieces have been authorized. The coin is co-ordinated with a Russian counterpart, and a two coin set will be available from the Real Casa de la Moneda.

For more information on this and other coins offered by the Real Casa, please visit their website at: http://www.fnmt.es/index.php?cha=collector&scha=14&page=224&spage=498