The United States Mint is currently offering 1.5-inch and 3-inch bronze medals honoring Dr. Martin Luther King, Jr. and Coretta Scott King. These medals represent duplicate versions of the Congressional Gold Medal awarded posthumously in recognition of their contributions to the Nation on behalf of the civil rights movement.

The Congressional Gold Medal was awarded during a ceremony held at the Capitol Rotunda on June 24, 2014. The medal was accepted by Lonnie Bunch, founding director of the Smithsonian National Museum of African American History and Culture.

The medal had been initially authorized under Public Law 108-368. Following the passing of Coretta Scott King, Public Law 113-118 was enacted to allow the medal to be given to the Smithsonian Institution where it will be made available for display and research. 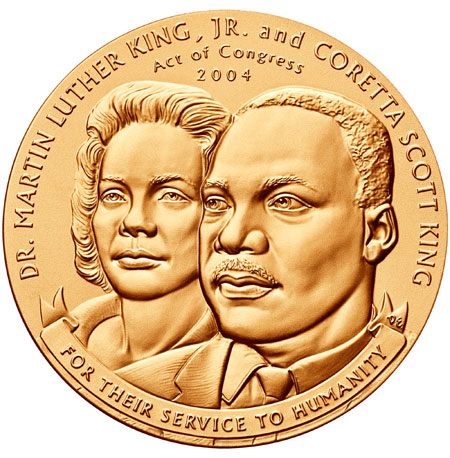 The obverse design of the medal features portraits of Dr. King and Coretta Scott King. Their names appear above along with “Act of Congress 2004”. A banner appearing at the base reads “For Their Service to Humanity”. The obverse was designed and sculpted by Don Everhart. 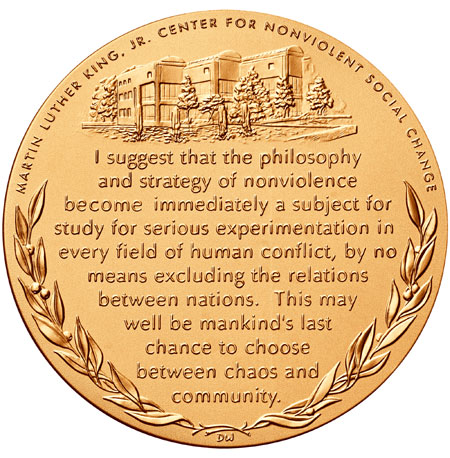 The reverse design of the medal depicts the Martin Luther King, Jr. Center for Nonviolent Social Change, which remains the official legacy of Dr. King’s dream of nonviolent social change and full civil rights for all Americans.  Below the image of the center is a quote recommended by Mrs. King. The lower half of the medal is encircled by a laurel wreath. The reverse was designed and engraved by Donna Weaver.

The included quote on the reverse reads:

I suggest that the philosophy and strategy of nonviolence become immediately a subject for study for serious experimentation in every field of human conflict, by no means excluding the relations between nations. This may well be mankind’s last chance to choose between chaos and community.