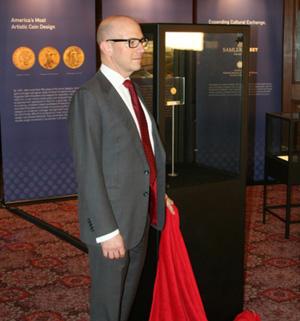 Within the splendor that is the Goldsmith’s Hall, among the priceless paintings and abundant city-of-London history, the display of the legendary 1933 Saint Gaudens Double Eagle gold coin made a bit of history itself today. On loan by special permission from the Smithsonian Institution and in conjunction with the Samler Huset Group, sponsors of the event, the coin will feature on a multi-city tour to what is expected will be many thousands of interested coin enthusiasts and collectors who will relish the opportunity to see an item which would ordinarily be off limits unless a visit to the US capitol is on the horizon.

With the kind of fanfare and anticipation usually on show for rock stars or royalty, the famed 1933 St. Gaudens $20 gold double Eagle coin was unveiled to a roomful of news reporters, journalists and photographers. Often referred to as the world’s most expensive coin, amid the security, from local, national and right up to international level, the glittering and renowned gold coin was unveiled from under red drapery by Peter Swanston, Samler Huset’s CEO.

Commenting on the event, Mr. Swanston noted “This is an incredibly exciting event. As well as being immensely valuable, the 1933 Double Eagle is a truly beautiful coin. We are thrilled to bring it to London and I’m sure many people will want to come and see this icon of American history.” 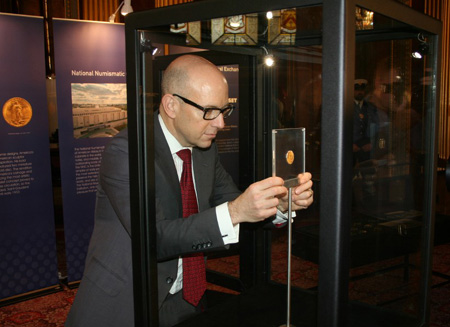 Encased in a Lucite frame and now housed in a glass and black steel showcase, which will also serve as its secure home for the next few weeks, the gold coin traveled from its permanent home in Washington D.C. to the heart of the financial district in London, literally a stone’s throw from the iconic St. Paul’s Cathedral.

The American numismatic treasure will be on show from the 3rd to the 4th March, just two days in London as it makes its way through several European capitals. I have it on good authority that the next city which will have the opportunity to welcome the coin will be Dublin. The tour organizers tell me that anyone wishing to know where to see the coin after Dublin will have to follow its progress on Facebook and Twitter due to the security concerns. The links appear below.

This Museum example currently on tour has spent almost its entire life as part of the National Numismatic Collection of the United States and on display at the world renowned Smithsonian Institution. Under the supervision and careful eye of Richard Doty, Senior Curator and Karen Lee, project Specialist of the Smithsonian, both are accompanying the coin as it winds its way through several European capitals in this the first tour of its kind. It was my privilege to have had the opportunity to inspect the coin close up and as a dedicated collector for most of my life, it was a great privilege.

The coin will be on display in London from 10am and 4pm on Saturday 3 and Sunday 4 March. Admission is free. For more information of the tour and to see if the 1933 $20 St. Gaudens double eagle will be visiting a city near you, please visit the website of:  www.1933doubleeagle.co.uk

The Story of the 1933 Saint Gaudens Double Eagle

The legend of the 1933 St. Gaudens double eagle coin began rather obscurely had it not been for the economic circumstances soon to follow. A casualty of the Great Depression, the US (not to mention most of the industrialized world) was in the midst of the worst economic climate it had seen since the era of reconstruction and as a measure to re-ignite international trade, the White House had sought to remove the United States from the Gold Standard. The US government declared that all gold coin must be turned into the treasury and paper notes were given in exchange. Virtually all gold coin with the exception of those which had numismatic value vanished from private hands and before long, no gold coin was seen in circulation. 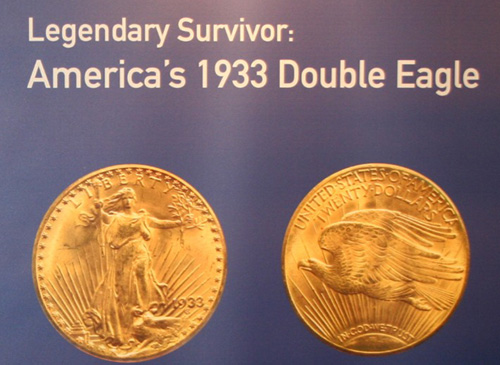 In 1933, almost 500,000 $20 gold coins were produced for general circulation but, as the depression took its toll, these coins were soon melted, turned into bullion and deposited in Fort Knox… that is with the exception of what were thought to be two examples, then another one… then 10 more. However, those further ten would not make themselves known for more than seven decades after their official melting.

The third coin made itself known in 1954 when this curious example was discovered as having been added to the coin collection of King Farouk of Egypt. The coin appeared to have vanished until it re-surfaced once again in New York in the mid-1990’s and in the possession of a British coin dealer who had negotiated to sell it to a private collector. The Secret Service finally seized it during a sting operation during which they, not a collector had purportedly negotiated to purchase the coin. After lengthy negotiations with the British coin dealer, the recognized owner, the coin was sold at auction for $7,590,000, plus $20 to compensate the Mint and the proceeds were divided between the two interested parties.

In September of 2004, ten more 1933 $20 gold examples were discovered and all ten specimens were sent to the US Mint to have them authenticated. The coins were determined to be genuine and seized, leading the previous owners to begin a protracted legal battle for possession of the coins. The US Government ultimately prevailed in a jury trail, although the case is under appeal. It is now acknowledged by the numismatic community that there are in fact 13 1933 examples to have survived the furnace, with only a single piece legal for private ownership… and so the legend continues!