This is second article in a two part series. Read Part I. 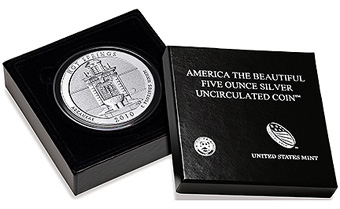 Some of the coverage of the ATB five ounce silver program struck me as unnecessarily harsh.  An example would be this quotation from Tom DeLorey in an article on the ATB silver bullion program in a recent issue of Coinage: “Suppose you were a member of what some consider to be the greatest deliberative body in the world, and you wanted to design the grandest coinage program this country has ever seen. Now go out and get blind, stinking drunk. You could not possibly create, while staggering drunk, a debacle any worse than what Congress, in its infinite wisdom, has already given us stone-cold sober with the America the Beautiful (ATB) ‘hockey pucks,’ as its new 5-ounce silver ‘bullion’ quarter dollars are derisively called in numismatic chat rooms and forums.”

Mr. DeLorey goes on to critique both the ATB quarters and the ATB five ounce silver program as perfect examples of the Mint’s blunders. There is little doubt that so far the ATB quarter program has not elicited anywhere near the interest the state quarters program did, and that many collectors probably needed a break from series that run ten years or more. But it is still early days for the ATB quarters, and the main reason far fewer people collect them than did state quarters is that because of the prolonged economic problems since 2008, there has been much less demand for circulating coinage and the coins are rarely received by banks. Those who want to collect the new quarters need to purchase them from the Mint or a dealer.  In addition, non-cash transactions are becoming more and more common as people use debit and credit cards more often.

This is definitely an area where the Mint should make some changes. It strikes me as incredibly wasteful to have bags of tens of millions of ATB quarters and presidential dollars sitting around collecting dust when there are millions of collectors who would collect those coins if they could receive them in change. Collectors should not have to pay high premiums to the Mint or dealers to obtain these coins, and hopefully as the economy improves, more coins will be made available. But the Federal Reserve also needs to allow banks around the country to order rolls of new coins as they are released.

Although the ATB silver coin program was hardly the unmitigated disaster portrayed in so many articles, letters, and online comments, clearly many things should have been handled better. For example, the Mint should have provided more information on the program and release dates during 2010 and not waited until right before the program’s launch to announce that they were unable to produce the planned number of coins. In addition, the AP’s seemed to have had great difficulty implementing the program.

There were many claims that some AP’s appeared to be violating some of the Mint’s terms for distribution of the coins, such as by cherry picking the best coins for grading and then later re-selling those coins at a premium.  The Mint recently announced that there are no grounds for conducting audits of how the AP’s handled the 2010 ATB bullion program.  It specifically stated that the AP practice of having the coins graded before selling them was not a violation of the Mint’s terms of sale.

It would have been preferable if the Mint had been able to begin releasing the ATB coins last year and had spread out the release of all the 2010 and 2011 bullion and collector coins. I understand there were production problems, but too many coins are being released too quickly. This puts a lot of strain on collector budgets and may be leading to “ATB fatigue.” That is a troubling development because the ATB program will run 11 years, and the first year or two is critical in a long-term coin program. It helps set future demand, and releasing too many coins in too short a period reduces the market demand for the coins.

Nevertheless, persistent buyers were generally able to obtain the 2010 bullion coins and to get them at a reasonable price, and many who had their better coins graded and received high grades, did even better on their investment. The 2010 coins would seem to have solid long-term potential, and many have compared them to the 1995-W proof-only silver eagle .[http://news.coinupdate.com/some-implications-of-the-america-the-beautiful-silver-bullion-coins-0632/]

The sometimes exaggerated criticisms about the handling of this program by the Mint and the AP’s and of buyers who bought and sold multiple sets have really taken a toll on the hobby and the market, and I hope that this year we can repair some of the damage. The hobby is already losing a large number of collectors because they pass away, or become turned off by high precious metal prices, the heavy focus on slabbed coins, and bad experiences with the Mint or buying and selling to dealers.

Fortunately, the 2011 bullion ATB program appears to be functioning much more smoothly now that far more coins are available and the distributors are not handicapped by special restrictions. The bullion coins are actually being sold as they should be for about the same mark-up over their silver content as American silver eagles, and they are readily available.

And the numismatic ATB program has also gotten off to a successful start. The Mint’s one coin per household limit, while violated by some people as expected, appeared to work well and allowed anyone who knew about the Hot Springs and Yellowstone coins and wanted one to purchase one, although there were some incorrect order cancellations. There were the expected web site issues during the first couple hours of the first day’s sales, and it does seem odd that the Mint is still in the process of upgrading its computer systems, but overall that program has started off well.

There are lots of things the Mint could do better, and these issues will be discussed in future articles.