As a journalist, whenever I see the abbreviation DNC I think about the Democratic National Committee. As a numismatist, of course, I know the abbreviation as “Did Not Cross,” meaning one grading company disagreed with the grade of another and refused to label a coin at the exact level.

In some ways, DNC can stand for “Democratic Numismatic Committee” because a panel of several graders purportedly views a coin democratically before assigning a grade.

Typically, when filling out grading forms for holdered coins, you can request “any” grade, allowing the new company to slab a coin at the same or lower grade. The key term is “grade” because the designation forbids a “Genuine” or “Details” label listing problems of non-gradable coins. The designation “any” allows the second company to label a coin anywhere from “Poor 1” to “Mint State 69” but no higher than the first company’s grade and generally not MS70.

A holdered coin labeled MS65, re-slabbed at that grade, is a “crossover.” One returned with a lower grade is a “cross-under.” One that comes back DNC is a “cross-out,” meaning the coin “did not cross,” returned in the original holder.

If you allow PCGS to mark a coin “Genuine,” or NGC “Details,” the new holder can come back at the same or lower grade or ungradable but still designated as authentic with reasons noted via numerical code or directly on the label.

You may want to designate “crossover” on coins in a reputable slab such as PCGS, NGC, ANACS, ICG or Dominion Grading Service. 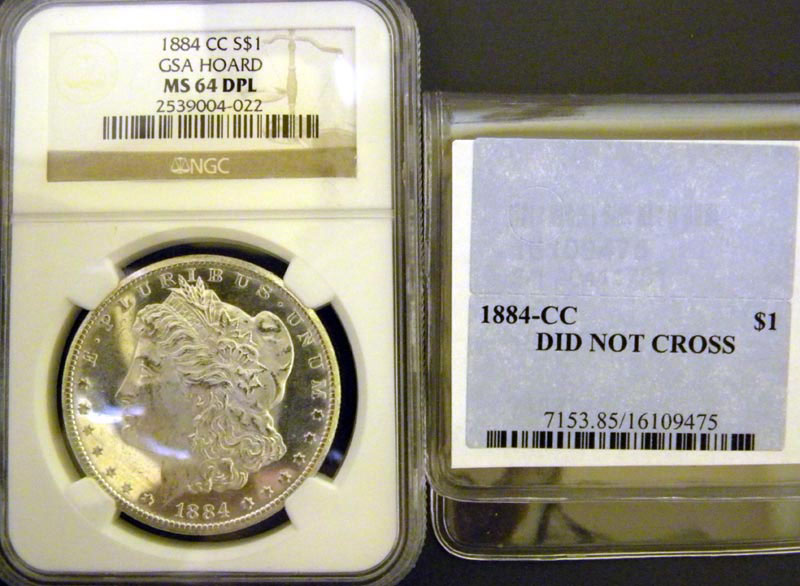 To illustrate a DNC designation, I sent the pictured NGC 1884-CC Morgan Dollar GSA Hoard MS64 Deep Prooflike to PCGS because I needed that year and mint mark for my registry (and PCGS, unlike NGC, does not allow its rivals’ coins to be included in the online set). I did not mark “any” or designate an acceptable lower grade, such as MS63 Deep Mirror Prooflike, because the value of the latter drops by almost 60 percent from MS64 to 63, from $600 to $350. (I might have considered such a drop from a second- or third-tier service, but not from NGC to PCGS.)

The coin came back in the original NGC holder with a DNC designation.

In truth, the NGC coin has magnificent watery surfaces (as the picture illustrates) with incredibly frosty devices; but a few marks on the obverse cheek might justify MS63 on a bad day and MS64 on a good.

It was a bad PCGS day.

My options are to keep the coin, sell it at Greysheet (wholesale) to a dealer, auction it and hope for a retail or higher bid (so I can purchase a comparable PCGS-holdered coin, crack out the coin and send it to PCGS, or try again as a crossover with PCGS.

I plan to keep the coin because, in a word, it is breath-taking and secure in my bank box.