Sleeping Beauty was based on “The Sleeping Beauty in the Wood” by Charles Perrault and Dornröschen (“Little Briar Rose”) by The Brothers Grimm. Perrault called his heroine Aurora, while the Grimms’ referred to their princess as Briar Rose. In their 1959 animation, Disney used both names.

Sleeping Beauty tells the story of Princess Aurora and Maleficent, the evil fairy who cast a dark spell over her at birth, declaring that before Aurora reaches her sixteenth birthday she will die by pricking her finger on the spindle of a spinning-wheel. With the help of Aurora’s three guardian fairies, Flora, Fauna, and Merryweather, the curse is altered so that Aurora will instead fall into a deep, enchanted sleep, from which she can only be woken by the kiss of her true love. 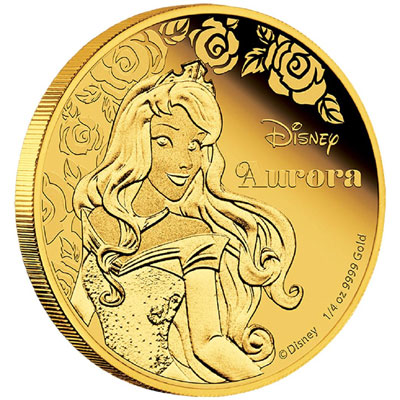 The reverse design of the coin features an image of Princess Aurora surrounded by classically struck flowers. The Disney logo appears along with inscriptions “Aurora” and “1/4 oz 9999 Gold”.  The obverse contains the Ian Rank Broadley effigy of Queen Elizabeth II along with the 2015 date and monetary denomination. 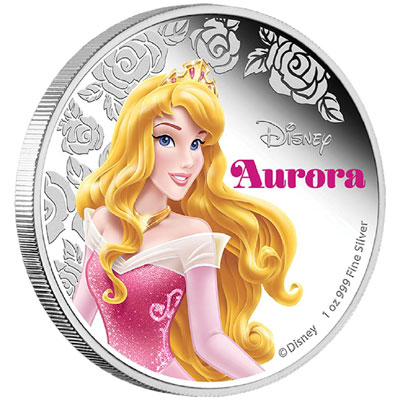 The silver coin features the same reverse design as the gold coin, enhanced with color. The silver coin is struck in 99.9% purity to proof quality with a weight of 1 troy ounce. No more than 10,000 of the coins will be released.

Both coins are officially licensed Disney products issued as legal tender under the Pacific Isle of Niue. Each coin is presented in special Disney wooden display case and packaged in an illustrated shipper with a numbered certificate of authenticity.

These and other officially licensed Disney coins can be found available for sale on the Perth Mint website.