The Perth Mint has begun sales of the 2012 Discover Australia Gold Proof Coins. The five new animal designs for the coins feature the Green and Gold Bell Frog, Red Kangaroo, Kookaburra, Goanna, and Whale Shark. Each of the five designs are struck from 99.99% pure gold in proof quality with 1/2 oz, 1/10 oz, or 1/25 oz sizes available in limited mintages. 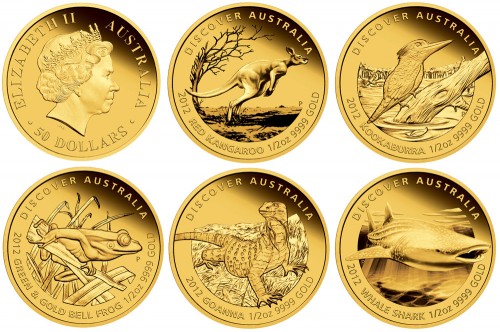 Red Kangaroo – The largest species of Australia’s best known animal, the kangaroo. Native to Australia, the Red Kangaroo can be found throughout the mainland across scrubland, grassland and desert habitats. They are mostly nocturnal, resting in the shade during the day or slowly grazing on grasses and shrubs. These beautiful creatures possess powerful hind legs for hopping and a pouch to carry their young.

Kookaburra – One of Australia’s most recognizable birds found throughout mainland Australia. The bird’s white colored plumage and brown facial stripe is distinctive, as is its loud laughing call. A territorial tree-dwelling kingfisher, the Kookaburra is believed to mate for life. Both the male and female partner share the incubation duties of their unhatched eggs, while other members in the family group later assist with the parenting responsibilities.

Goanna – one of Australia’s largest monitor lizards. These reptiles are usually dark grey to black in color and display cream or yellow scales, which form bands and spots, in contrast. Goannas are found throughout most of Australia in a variety of environments. Using their powerful legs and tail, long neck and strong claws, the Goanna can move quickly across the ground and among tree branches, and is the only lizard to possess a forked tongue.

Whale Shark – the world’s largest fish, yet despite its formidable size is considered harmless. Found in coastal waters and the lagoons of coral atolls and reefs, the upper body of the Whale Shark is blue-grey to brown in color, with light spots. Boasting some 3,000 tiny teeth, the Whale Shark is a filter feeder, sieving food through its gills. This majestic creature was not discovered until 1828, although the species is actually millions of years old.

The reverse design of each coin features a depiction of the animal with inscriptions reading “Discover Australia”, the “2012” date, the animal name, and the weight and purity of the gold content. The obverse design of each coin features the Ian Rank-Broadley effigy of Queen Elizabeth II, with inscriptions “Elizabeth II”, “Australia”, and the legal tender face value.

Each coin is available individually in 1/2 oz, 1/10 oz, or 1/25 oz sizes. Five coin sets are also available for each different size. The individual coins come in a display case, while the sets come in a presentation case with a timber lid and stylized shipper. Each contains a numbered certificate of authenticity.