Towards the end of the most recent meeting of the Citizens Coinage Advisory Committee, Chairman Gary Marks stated that the 25-year anniversary of the American Silver Eagle had arrived, and as such its design was eligible to be changed. The committee held a voice vote, and unanimously agreed to entertain designs for a possible change. 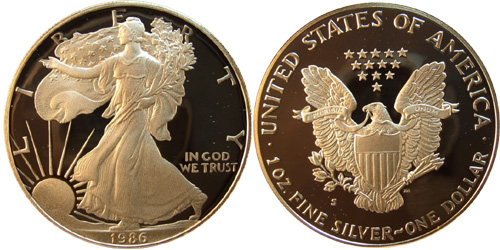 The idea for the American Silver Eagle came from plans during the 1970’s and early 1980’s by the President to sell off silver from the National Defense Stockpile, as the domestic production of the metal outstripped the needs. These plans were thwarted by Congressmen from silver-mining states, who stated the sales would adversely and disproportionally impact their constituents. The logjam between the Executive and Legislative branches of government was broken in mid-1985, when the concept of producing a silver coin was offered by then Senator James A. McClure (R-Idaho) by his amendment to H.R. 47, the “Statue of Liberty-Ellis Island Commemorative Coin Act”.

Any redesign would have to stay within the parameters of the authorizing statute, which specified depictions of Liberty and an eagle. The redesigns of other coins (50 States Quarters, Jefferson Nickels, and Lincoln Cents, to name a few) did increase interest in coin collecting by the general public. In this case, however, demand for silver is sufficient that non-governmental organizations are able to step into the market and provide for the demand. It is this reporter’s belief that much like the Austrian Maria Theresa Thaler, the American Silver Eagle should continue with its current design. The Weinman Walking Liberty on its obverse is one of the most beloved designs to appear on an American coin, and the Mercanti Eagle reverse contains all of the classic symbols of America.