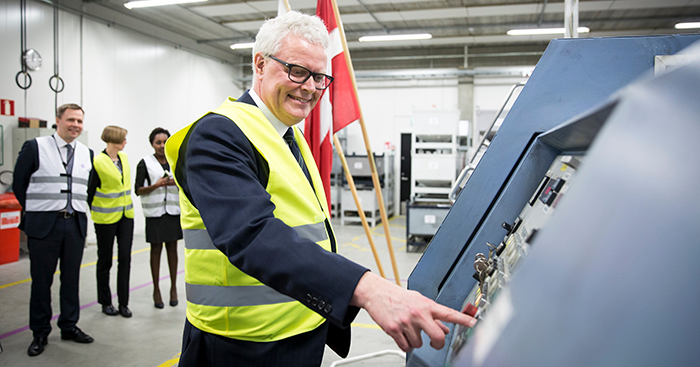 The Mint of Finland announced on 21st March that production of Danish circulation coinage has officially begun, with the minting of circulation-quality 20-kroner coins. Governor Hugo Frey Jensen (pictured) of Danmarks Nationalbank attended the first-strike ceremony in Vantaa to celebrate the start of manufacturing and production. It was also announced that the Mint of Finland will be minting the upcoming commemorative coins on the occasion of the 50th wedding anniversary of Her Majesty Queen Margrethe II and His Royal Highness Prince Henrik, which will occur in June 2017. Last year, Mint of Finland won the tendering competition organised by Danmarks Nationalbank. In addition to cost-effectiveness, the tendering process addressed the quality, security, and social responsibility of the projects. Mint of Finland and Danmarks Nationalbank have signed a four-year framework agreement for the minting and delivery of Danish coins.

It was announced in October 2014 that the function of the Royal Mint of Denmark (Den Kongelige Mønt)—whose rich history spans as far back as the early 16th century, when it was officially established by the Danish Crown—would cease. The reason cited for this change was due to cost-saving measures that would be result from outsourcing the production of both coins and banknotes. This decision is expected to yield total savings of 100 million kroner (or $17 million USD) over a four-year period from the date the change was announced. The Mint of Finland Group generates revenue in three business areas, blanks, circulation coins, and collector coins, and is owned by the Republic of Finland.

The new coins are expected to be released shortly. The National Bank currently issue coins in six denominations from 20 kroner to 50 ore.   ❑