Denali National Park and Preserve, located in the interior of Alaska, is named for the local name of the highest point in North America, also known as Mount McKinley. Over 6 million acres in size, it is a mixture of forests, tundra, and glaciers, depending on elevation. Its history began when Charles Alexander Sheldon petitioned the U.S. Congress and the local citizenry to create a protected area for the indigenous Dall sheep. It was later established as Mount McKinley National Park on February 26, 1917. 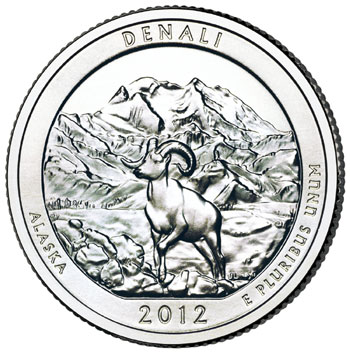 The Denali National Park Quarter features the image of a Dall sheep with Mount McKinley towering in the background. Similar compositions have been used for other sites which comprise vast areas including mountain ranges. Also included in the design are the incused phrases “Denali”, “Alaska”, and “E Pluribus Unum”, as well as the date of issue. The coin will represent the fifth and final issue of the United States Mint’s America the Beautiful Quarters Program for 2012.

The Denali Quarter will be available from the U.S. Mint in the following numismatic products: