Even though it is dated 1936, the Delaware Tercentenary Half Dollar was not struck until 1937, and it commemorated an event that did not take place until 1938. It is one of the many examples how the early commemoratives were exploited to suit the interests of local groups wishing to make money off the craze that the commemorative market was in during the 1930s. Yet this was certainly a legitimate issue, as it celebrated the 300th anniversary of Swedish colonists settling in the region that would later become the State of Delaware.

Congress authorized what would later become known as the Delaware Half Dollar (as it is usually referred to) on May 15, 1936. The coin was to celebrate the fact that in March of 1638 a group of Swedes from southern Sweden had come aboard two ships (the Kalmar Nyckel and Fogel Grip) and settled at what would later become Wilmington, Delaware. Most Americans will now consider Sweden a picturesque Scandinavian country, located between Norway and Finland, but in the early 17th century its territory was much larger and included parts of present-day Denmark, Norway, Finland, Russia as well as some of the Baltic States.

The colony of New Sweden (Nya Sverige) is relatively unknown in American history, as it only lasted for seventeen years and was overshadowed by the more influential Dutch and English settlements in the region. Sweden wanted to be part of the larger colonizing powers such as the Spain, England and the Netherlands, and for this purpose the Swedish West India Company was founded. The company’s first sponsored expedition was on the aforementioned ships to the present-day region of Delaware, where in March of 1638 Fort Christina (named after the Swedish Queen) was erected. The Swedes hired Dutchman Peter Minuit (known for acquiring the island of Manhattan from the Native Americans) as the first governor and the colony grew slowly over the following years. In 1655, however, at the time of the Second Northern War back in Europe the Dutch seized the colony of New Sweden, and even though the Swedes retained some autonomy over the next decade any hopes of a large and prosperous colony were gone.

Three hundred years after the first Scandinavians arrived on the North-American coast the Delaware Swedish Tercentenary Commission oversaw the issuance of the commemorative half dollar. The commission organized a competition to select the designer of the coins, which was won by Carl L. Schmitz, who was awarded $500 as a prize. Schmitz was born in 1900 in the city of Metz, now part of Germany but at the time part of France. At the age of 23 he immigrated to the United States and studied at the Beaux-Arts Institute of Design in New York. 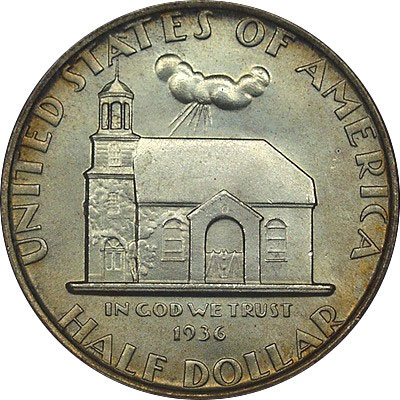 The obverse of the coin featured a side-view of the Holy Trinity Church (more commonly known as the Old Swedes Church) in Wilmington, Delaware. Even though it wasn’t built until long after New Sweden had passed the church is a lasting reminder of the Swedish presence in the area (the church remains standing to this day). It is located on the old burial ground of Fort Christina. The church is among the oldest churches still in use as such in the United States, with only a few older churches remaining that continue in use to this day. On the coin itself, above the church is UNITED STATES OF AMERICA. Directly below it are IN GOD WE TRUST and the date of authorization, 1936. Near the bottom rim is the denomination as HALF DOLLAR. 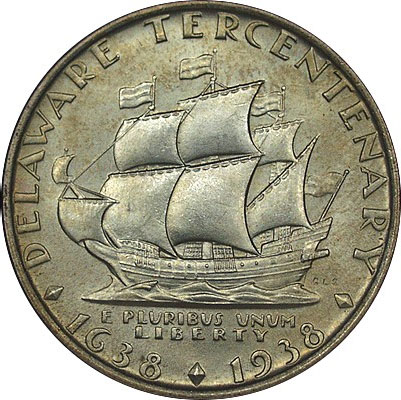 The reverse featured one of the two ships on which the first emigrants came to the Delaware coast, the Kalmar Nyckel. Directly below it is E PLURIBUS UNUM, and below that is LIBERTY. The dual dates 1638-1938 are found near the bottom rim, and the rest of the design is enclosed by the words DELAWARE TERCENTENARY. The words are separated by diamond-like figures. According to Anthony Swiatek these diamonds symbolize “the state’s size, its fertile soil, and its three countries of Kent, New Castle and Sussex.”

Congress authorized a minimum mintage of 25,000 coins, with no set limit. The Philadelphia Mint struck 25,000 coins in March 1937, which were offered for sale through the Equitable Trust Company of Wilmington. The issue price was $1.75 per coin, which were mailed in special folders, which contained spaces for five coins. Sales were less than expected, and a total of 4,022 coins were unsold and returned to the Philadelphia Mint and melted. This leaves a net mintage of 20,978 coins. This issue is not very difficult to find in the lower uncirculated grades, although strictly-graded gems can be scarce and require some searching. MS-66 pieces are scarce and anything finer is rare, thanks in part to the ships sails on the reverse, which are prone to highlight bagmarks and other imperfections.

Sweden also did its part in the celebration by issuing its own commemorative coin, a silver 2 Kronor piece released in 1938. The coin featured the portrait of King Gustav V on the obverse and the Kalmar Nyckel (with more detail) on the reverse. This issue had a much larger mintage than its American counterpart, with a total of 508,815 coins struck for circulation. The coin is part of a somewhat extensive series of Swedish Commemoratives and is relatively affordable, with uncirculated pieces usually available for about $20 on online auction websites. The coin was also offered in the United States in special holders describing the history of the coin and remains popular with American collectors for its close ties with American numismatics and the common reverse design.