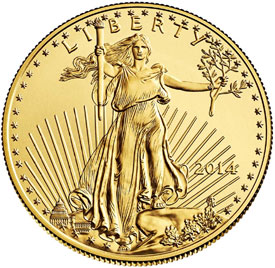 The United States Mint’s gold and silver bullion sales were mixed in December. The American Silver Eagles had a strong final month, leading to the establishment of a new annual sales record. American Gold Eagles saw their lowest monthly sales level for the year, amidst a sharp decline in annual sales.

During the month of December, the US Mint recorded sales of 2,459,000 ounces of Silver Eagles before a sell out of the 2014-dated coins was officially announced on December 24. The monthly sales total far surpassed the year ago sales level of 1,200,000 ounces, which was impacted by a production shift to coins bearing the coming year’s date.

For the full year, Silver Eagle sales reached 44,006,000, establishing a new annual sales record. This represents the sixth time in seven years that the popular silver bullion coins have achieved a new sales record. The previous record of 42,675,000 ounces was established in 2013.

The US Mint will open sales for the 2015-dated American Silver Eagle bullion coins on January 12, 2015.

American Gold Eagle bullion sales during December reached just 18,000 troy ounces across the one ounce, quarter ounce, and tenth ounce sizes. This represented a sharp decline from the year ago period when monthly sales were 56,000 ounces.

The weak final month caps off a year of lower demand for the gold bullion coins. For the full year, Gold Eagle bullion sales measured 524,000 ounces. This represents a decline of 38.8% compared to the prior year when sales had reached 856,500 ounces.

Sales for the 24 karat American Gold Buffalo bullion coins were 4,500 ounces for December, also representing the lowest monthly sales level of the year. For the full year, sales measured 177,500 ounces compared to sales of 239,000 ounces in the prior year.

Rounding out the range of bullion offerings, the US Mint recorded sales of 6,600 ounces worth of the America the Beautiful 5 Ounce Silver bullion coins for December. Full year sales of 135,300 ounces come in slightly higher than last year’s total sales of 128,700.

The Mint has not yet provided details on the start of sales for the 2015-dated issues of the oversized silver bullion coin series.