The obverse of Anthony de Francisci’s Peace dollar features a large, profile head of the goddess Liberty. Her long hair is combed back and the tresses are coiled into a bun at the crown of her head. Several locks of hair are loose and blown backward by a breeze. On her head is a tiara projecting rays of light—the liberty of thought—into the world. The bust occupies most of the diameter of the coin. Just inside the upper rim is the word LIBERTY, widely spaced and partially overlain by the light rays. The motto IN GOD WE TRUST is placed horizontally, with Liberty’s neck dividing the phrase. Beneath the portrait is the date 1921. 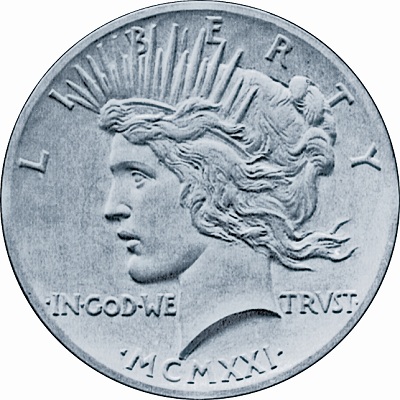 There are no sketches known of the obverse portrait so we don’t know what Miss Liberty looked like before the plaster model de Francisci entered in the competition. With his wife, Teresa, available as a model, it is likely that the artist did his preliminary work directly in clay or plaster. The competition’s specifications were clear and the sculptor’s vision needed little working out once he had decided on the approach. The sketch model submitted for the competition was based on the sculptor’s previous impressions of the goddess and the profile of his wife. 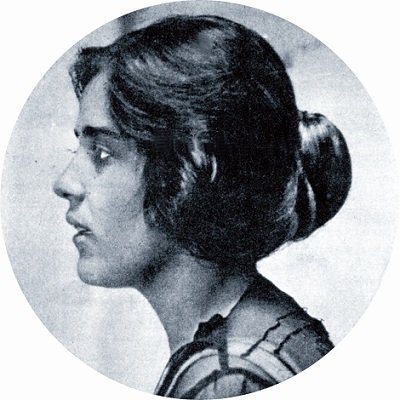 After the competition was awarded, de Francisci used a bust of Victory by Augustus Saint-Gaudens (supplied by James Fraser) to help get the portrait the way the commission preferred. The Victory bust was similar to Saint-Gaudens’s 1907 design for the one-cent coin and the medal NIKH-EIPHNH (Nike-Eirene—“Victory-Peace”) from 1902. 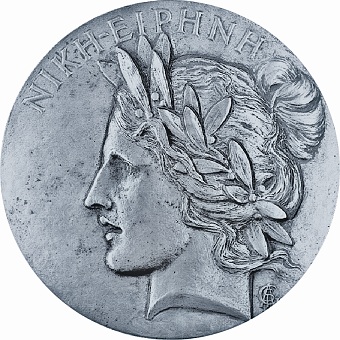 The profile portrait of Teresa de Francisci appeared in many newspapers just after the new coin was released. Feature writers promoted Teresa as the model for the new dollar and encouraged their readers to believe the portrait of Liberty was really Teresa’s portrait. Since few readers had seen the new coin, and the papers were prohibited from printing photos of it, imagination took over and some stories deteriorated into fiction. 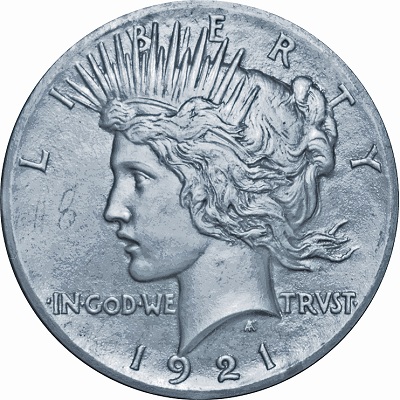 A cast of the final design. ©Whitman Publishing, LLC.

De Francisci’s final Liberty portrait differs from the prototypes in several important ways: the forehead is more nearly vertical, with a well-defined eye ridge above the nose; the nose is shorter in proportion to the face; the chin is narrower, with a slightly smaller overbite. The sculptor’s earliest training was in Italy, where the sculpted portrait tended to be less massive than the French style favored by Saint-Gaudens. Overall, the Peace dollar Liberty is lighter, more youthful, and less formal than its predecessors, although not as bold.

This obverse was paired with the original reverse. Unfortunately, this combination distributed the highest portions of the head opposite the highest portions of the eagle. This arrangement could not have produced well-struck coins while retaining higher-than-normal relief. Contributing to the appearance of weak striking is the lack of fine detail in the hair above the ear. This area is somewhat better defined on the original cast than on the best of the coins, although it is this “massing of the hair” that Fraser stated was preferred. The missing detail is therefore a part of the design concept combined with poorly made reductions and incomplete striking.

This article was excerpted and condensed from Roger W. Burdette’s A Guide Book of Peace Dollars.