The United States Mint recently released final production figures for the last release of this year’s District of Columbia & United States Territories Quarters Program. With this updated information, mintages for each release of the series are known. 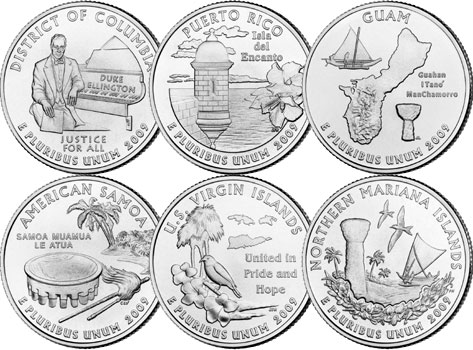 The DC & US Territories Quarters Program consisted of six quarter dollar coins issued throughout 2009 to honor jurisdictions not classified as states. This included quarters for the District of Columbia, Puerto Rico, Guam, American Samoa, the U.S. Virgin Islands, and the Northern Mariana Islands. The format was similar to the prior 50 State Quarters Program, with each quarter bearing a distinct reverse design with images emblematic of the District of Columbia and each of the territories.

The mintages for each release of the series are presented below. These represent circulating coins produced by the United States Mint at the Philadelphia and Denver facilities, including coins sold through the numismatic bags and rolls program.

The DC & US Territories Quarters series had 636.2 million coins produced for the entire series across six designs. The highest overall mintage occurred for the 2009 District of Columbia Quarter with 172.4 million produced. Mintages for each subsequent release declined, culminating with the lowest mintage Northern Mariana Islands Quarter at 72.8 million.

Mintages for this year’s quarter series are far below the levels experienced for the prior 50 State Quarters series. Each year from 1999 to 2008, at least 2 billion State Quarters had been produced, with nearly 35 billion produced during the entire 10 year series. The highest mintage for an individual state was 1.59 billion for the 2000 Virginia Quarter. The lowest mintage for an individual state was 416.6 million for the 2008 Oklahoma Quarter.