The Congressional Gold Medal was awarded to human rights activist Daw Aung San Suu Kyi at a ceremony held in the U.S. Capitol Rotunda on September 19, 2012. The medal was awarded in recognition of her courageous and unwavering commitment to peace, nonviolence, human rights and democracy in Burma.

Suu Kyi is a Burmese opposition politician and chairperson of the National League for Democracy in Burma. She was awarded the Sakharov Prize for Freedom of Thought in 1990, the Nobel Peace Prize in 1991, and the Presidential Medal of Freedom in 2000. 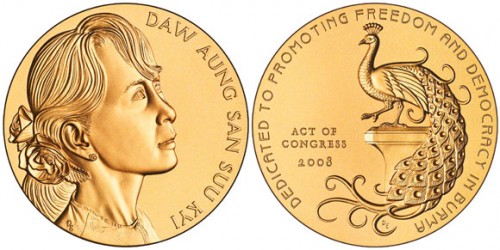 The Congressional Gold Medal was designed and struck by the United States Mint. The obverse features a portrait of Suu Kyi based on a photograph by Eddie Adams. The reverse depicts a peacock and contains the inscriptions “Dedicated to promoting freedom and democracy in Burma” and “Act of Congress 2008”. The obverse and reverse were designed and sculpted by United States Mint Sculptor-Engraver Don Everhart.

The United States Mint has produced three-inch and one-and-one-half-inch bronze reproductions of the medal, which are available for sale to the public. Orders may be placed online at http://catalog.usmint.gov/