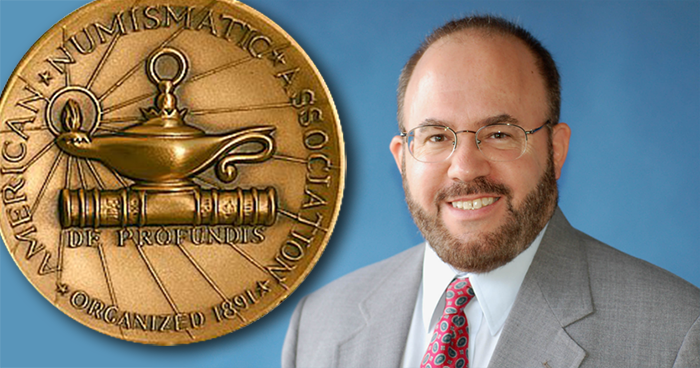 David W. Lange is the 2017 recipient of the American Numismatic Association’s (ANA’s) Numismatist of the Year Award. The award honors an individual within the numismatic community who has demonstrated long-term leadership in the field and to the association. He will be presented with the award on Friday, August 4, during the awards banquet at the World’s Fair of Money in Denver.

As an author and researcher, David Lange is adept in a wide variety of numismatic areas. The longtime collector specializes in U.S. type coins, Philippine coins and notes from 1903 to 1945, and British coins from 1816 to 1970. He pioneered the study of coin-collecting boards and folders, writing three volumes and designing and maintaining a website on the subject.

A gifted writer, Lange received his first literary recognition more than 30 years ago and has gone on to collect many more awards, including 19 from the Numismatic Literary Guild. He has written nine books since 1992 (three for Whitman Publishing), and has appeared in the acknowledgments of at least a dozen other works. Lange has authored approximately 200 feature articles for nearly 20 numismatic journals and publications, and has been a columnist for The Numismatist since 1988.

As the research director for Numismatic Guaranty Corporation (a position he has held since 1994), Lange has enabled the company’s website to record and publicize all NGC-recognized varieties. He also created the VarietyPlus page, which associates coins with a standard system of descriptions.

The American Numismatic Association is a congressionally chartered, nonprofit educational organization dedicated to encouraging the study and collection of coins and related items. The ANA helps its 25,000 members and the public discover and explore the world of money through its vast array of instructional and outreach programs, as well as its museum, library, publications and conventions. For more information, call 719-632-2646 or visit www.money.org.   ❑