On May 19, 2015 Stack’s-Bowers in conjunction with Sotheby’s sold the first installment of the Pogue Collection of early American coinage. Touted as the collection of the century by many, the first auction was held in New York City, and included early Half Dimes, Dimes, Quarters, Half Dollars and Quarter Eagles. We previously previewed the article in two preview articles (here and here), and in this recap we will take a look back at the auction and some of the highest prices realized. Please note that all prices mentioned include a 17.5% buyers premium. All lots as well as prices realized can be found on the Stack’s-Bowers website using this link: http://www.stacksbowers.com/AuctionArchive/LotArchive/tabid/786/AuctionID/6071/Default.aspx.

The first lot in the sale, 1001, was a near gem example of the 1792 Half Disme, graded MS-64 by PCGS (all coins in the collection were certified by PCGS with special labels denoting the provenance of the coins). The coin, while not the finest known of this one-year type was a wholesome and fully original example and realized $440,625. The first lot kicked off an auction of 128 coins of which many realized 6-figure sums, in some cases setting price records for their respective issues or types. 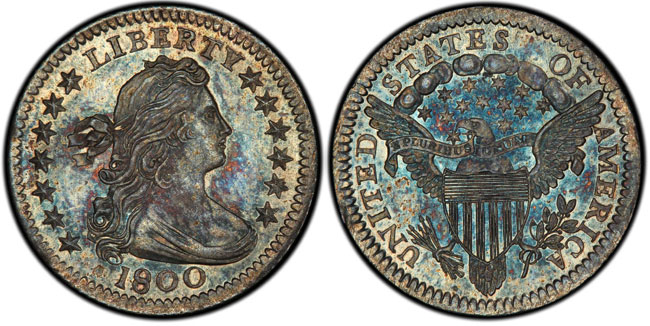 Many coins in the collection (but not all) were the finest known of their date and type, and such coins realized strong prices. One such coin was lot 1010, the finest known Draped Bust/Heraldic Eagle Half Dime in existence, graded MS-68 by PCGS. In fact, it is (numerically) one of the finest known American coins known to exist dated prior to 1900, and a coin that is rivaled by very few, and only a handful of coins dated prior to 1840. Bidders realized how special this coin was, and it sold for $381,875. Another rarity in this series was offered as 1013, a PCGS AU-50 graded example of the fabled 1802 Half Dime, one of the classic key-dates of the early American series. While not the finest known (two have been graded finer) bidding was still intense for this lot, and the coin sold for $305,000.

The very first dime of the United States is the 1796 Draped Bust/Small Eagle type, represented in the Pogue Collection with lot 1034, graded MS-66+ by PCGS. Considered one of the finest known examples of this iconic first year of issue, the coin is fully original with appealing toning and like many coins in the Pogue collection came with a pedigree going back over a century. The coin came with a relatively low presale estimate of $120,000-$175,000, but not surprisingly it sold for over that, realizing $235,000.

1804 Draped Bust Dimes are another key-date in the American series, and few are offered at public auction each year. While many dates are only represented by a single example in the Pogue collection this is not the case with the 1804 Dime, with three coins (representing two different varieties) offered in the Pogue collection. The highest result for this rare date came with lot 1046, a 14-star JR-2 variety graded AU-58 by PCGS, which sold for $329,000.

For many people the highlight of this part of the Pogue collection was lot 1051. Graded MS-66 by PCGS, this 1796 Draped Bust/Small Eagle Quarter is the first of this denomination struck by the United States Mint, as well as a one-year type, the only quarter dollar struck in the 18th century, and the only struck prior to 1804, when the next quarter dollars were struck for circulation. The coin, considered one of the finest of this important type, sold for $1,527,500, a new record price for this date. The pedigree of the coin went back to the 1922 James Ten Eyck collection sale, but the astounding quality of the coin testifies to the fact that the coin must have enjoyed extraordinarily good care since at least the first part of the 18th century.

As we discussed in our preview article, the Pogue collection includes an impressive display of early Proof Quarters, all of which are extremely rare coins, very seldom offered for sale. The highlight of this subset was offered as lot 1076, an extremely rare PCGS PR-66+ Cameo graded example of the 1827/3/2 Capped Bust Quarter, a date of which a very small number of proofs are known to exist, with no circulation strikes known to have been struck or known to have survived. The rarity of this date was known to the numismatic world as early as 1857, the year that coin collecting really took off in the United States following the withdrawal of large cents from circulation. Now, in 2015, the market value for such a rarity seems to have been established with the sale of the Pogue coin, which sold for $705,000.

The first Half Dollar of the United States was struck in 1794, the same year that silver dollars were first produced, and it’s a popular type struck in 1794 and 1795. The first year of issue for the denomination in the Pogue collection was represented by an MS-64 graded example, offered as lot 1095. One of just three mint state examples graded by PCGS of this date, the coin is the finest known of the issue, and realized $763,750. This price, however, was not the highest for a half dollar in the sale, as that honor goes to lot 1103, the finest known example of the 1797 Draped Bust/Small Eagle Half Dollar graded MS-66 by PCGS. The coin realized $1,527,500, a testimony to the extreme rarity of this coin. This type was only struck in 1796 and 1797 in extremely limited numbers, and even well-circulated/damaged examples of this type are in extremely high demand. The coin was a highlight in what is considered the finest known and complete set of this type, consisting of several finest known examples of this enigmatic type.

The first part of the Pogue collection offered a relatively small selection of gold quarter eagles (more gold coins will be sold in subsequent sales of the Pogue collection). The first of these, lot 1116, was an extremely rare mint-state example of the 1796 No Stars Quarter Eagle, graded MS-62 by PCGS. A rare type only produced in 1796 (later that year obverse stars were added to the design), the coin realized $822,500. A strong price was also realized for another Quarter Eagle, lot 1119, an MS-65 graded example of the 1798 Quarter Eagle. The single finest known example of this relatively common date, the coin realized $763,750 against a presale estimate of $200,000-$325,000.

After all the amazing coins we have mentioned in this article so far there is one lot left, lot 1128, which also realized the highest price in this auction. The coin is a very rare example of the one-year-only 1808 Capped Bust Left (Large Cap) Quarter Eagle, graded MS-65 by PCGS, the single finest known of this coin. The coin saw spirited bidding, and realized $2,350,000, almost four times the previous auction record for this date. The coin was a fitting closer to an auction fitted with many rarities, with many more to come in subsequent auctions of the Pogue collection that will continue with seven more sales that will last until the end of 2017. This first part has already shown that the collection features rarities seldom seen, with all coins in amazing quality, making the name “Collection of the Century” aptly fit for the Pogue collection. The next auction is scheduled for October 1st, so keep an eye on this website for a preview of part 2 of the Pogue Collection sometime in September.