The name D. Brent Pogue has been going around the numismatic world recently and not without reason. The name has become synonymous with a magnificent collection of early American coins, comprising approximately 650 pieces total. The collection will be sold during a number of auction sales, jointly organized by Stack’s-Bowers and Sotheby’s, with the first auction scheduled for May 19 in New York City. This first auction contains 128 lots, with the lots offered consisting of half dimes, dimes, quarters, halves and quarter eagles. The quality of the coins is outstanding; many are finest known or second-finest known (all have been certified by PCGS with the holders displaying special gold-foil pedigreed labels), and virtually all are of the quality and rarity that if this were a normal auction we would mention virtually all of those coins in a preview article. Of course, we can not cover each lot individually, but we still like to mention the absolute top of the collection in two preview articles. This article, the first, will cover half dimes and dimes. The second article will feature the quarter dollars, half dollars and quarter eagles. High-quality listings and descriptions can be accessed using this link (http://www.stacksbowers.com/BrowseAuctions/LotListing.aspx?AuctionID=6071&Clear=1&q=). A PDF copy of the over-sized catalog can be found using this link (http://media.stacksbowers.com/VirtualCatalogs/2015/Stacks-Bowers-Galleries/Pogue_Sale_One_Catalog_LR.pdf). 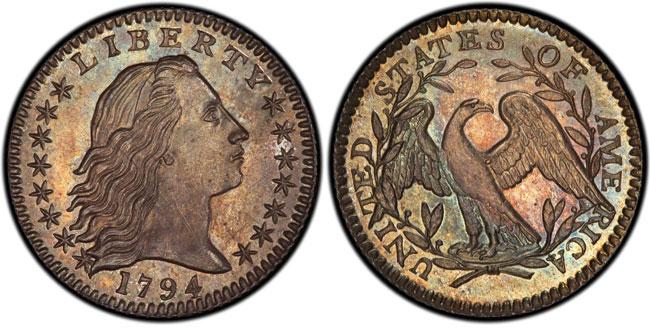 The Pogue Collection is considered the collection of a lifetime, with many coins offered in mind-blowing quality. The first coin is an MS64 graded example of the 1792 Half Disme, a coin referenced by both Thomas Jefferson and George Washington, a very special coin, but we will start our in-depth discussion with lot 1002, the only Flowing Hair Half Dime certified as a specimen by PCGS, dated 1794, and graded SP-67. The coin is as perfect as you could possibly expect an 18th century coin to be. While Proofs were produced on and off during the first half century of the United States Mint they were generally only produced for dignitaries. We do not know for whom or why this particular coin was produced, but judging by its quality the previous owners must have taken extraordinary good care of the coin. 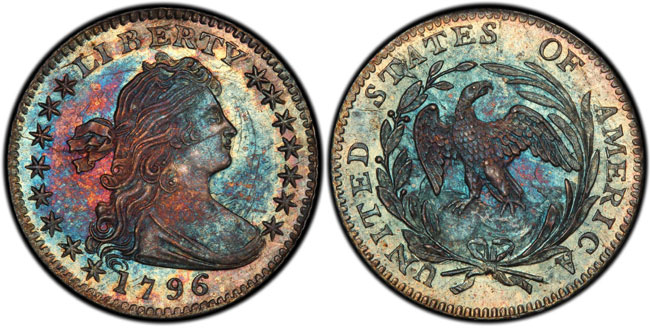 Lot 1005 is another high-quality half dime from the 18th century. In fact, it is touted in the catalog as “The Finest Known Half Dime of the 1790s”. The coin, a 1796 Half Dime of the LIKERTY variety, is graded PCGS MS-67+ and a magnificently toned prooflike example of the Draped Bust/Small Eagle Half Dime. Unbelievably it is not the finest Draped Bust Half Dime in existence; that honor goes to another coin in the Pogue collection, offered as lot 1010. It is an 1800 Draped Bust/Heraldic Eagle Half Dime, which has been graded MS-68 and is pedigreed to the Norweb collection. The pair makes the ultimate type set of Draped Bust Half Dimes. 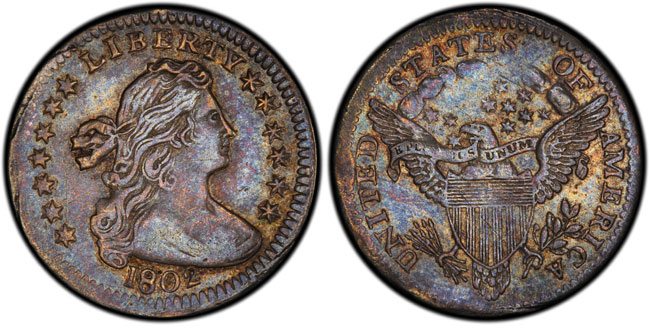 Some early American coins are (virtually) unknown to exist in uncirculated condition. As a result there are also circulated coins in the collection, most of which are extremely rare coins. One such coin, a classic rarity, is offered as lot 1013. Considered the second or third finest known 1802 Half Dime, it is graded AU-50, and is a rarely encountered survivor of an original mintage of just 3,060 coins. This makes it one of the rarest American coins struck for circulation. Circulation is where all of the 1802 Half Dimes spent a long time, and virtually all survivors are extremely low-grade, damaged, or both. Even though it might not be as well known as more published rarities such as the 1804 Silver Dollar it is almost equally as rare. 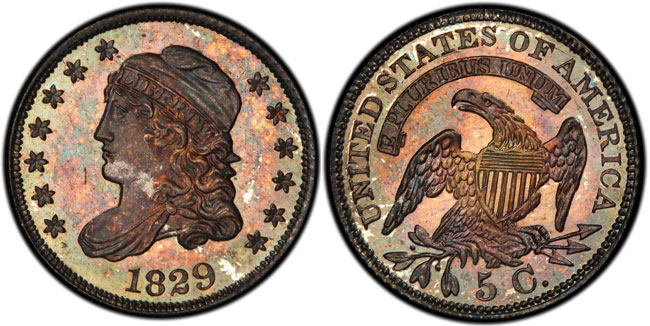 The Capped Bust Half Dimes in the collection are all top-notch examples ranging in grades from MS-65 to MS-67+, making it what could generally be considered the finest assemblage of the type ever offered at auction. The highlight of this type is lot 1017, a rare proof 1829 Capped Bust Half Dime graded PR-67+. Of this particular proof we know more details; it was struck to commemorate the laying of the cornerstone for the 2nd Philadelphia Mint on July 4th, 1829. Several die pairs were used to strike proof 1829 Half Dimes, and the general consensus is that three die pairs produced definitive proofs, but that only the LM-2 variety (such as the Pogue coin) was actually struck on July 4th, with the rest struck at some other point in the year. About a dozen or so 1829 Half Dimes are known to exist in proof format, of which the Pogue coin is the definitive finest. 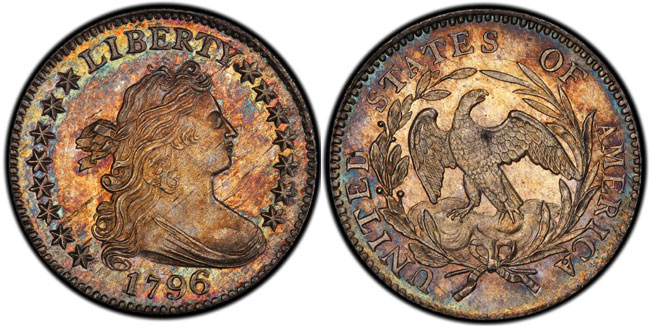 The dimes in the Pogue collection are as equally impressive as the half dimes. Offered in the first part are Draped Bust Dimes, with once again many finest known examples, which start with lot 1034. The first dime offered is an amazing MS66+ 1796 Draped Bust/Small Eagle dime, a spectacular rainbow toned, sharply struck and very appealing example of the first year of issue for the denomination. While 1796 Dimes are not necessarily rare in uncirculated condition, as quite a few appear to have been saved as souvenirs at the time of issue, true original gems remain very difficult to find, which should not come as a surprise for a 220 year old coin. Amazingly enough there are two coins of this issue that are considered finer than the Pogue coin (both graded by PCGS, one MS-67 and one MS-68), but the eye-appeal of the Pogue coin clearly makes up for the grading points it lacks over the other high-end examples of this issue.

When a collection such as the Pogue collection comes up for sale often there are often important names listed in the pedigrees. This is also the case with many of the coins in the Pogue collection, some of which can be traced back to people that owned the coins all the way back to the 19th century. One such coin is lot 1035, one of the finest 1797 “16 Stars” Dime in existence, graded MS-66. Its pedigree can be traced back to the 1890 sale of the Parmelee collection. The coin is one of several United States coins with more than thirteen stars on the obverse (usually representing the original thirteen colonies), struck at a time when the Mint was not quite sure yet how many stars to add to the obverse die as new states joined the Union.

1804 Draped Bust Dimes are rare, with an original mintage of just 8,265 coins. To make the date even more challenging for advanced collectors is that there are two distinct varieties: one with the normal thirteen obverse stars (JR-1), and another with fourteen obverse tars (JR-2). Both are about equally as rare, and the acquisition of an 1804 Dime is often the mark of an advanced collection. The Pogue collection has a total of three(!) 1804 Dimes, all graded AU, which are marked as the finest known examples in existence for the date. Of course, in line with the rest of the collection, this is an amazing accomplishment and a true testimony to the greatness of the Pogue collection. Lot 1045 is the 13 star variety, graded AU-55, while lot 1046 and 1047 are both examples of the 14 star variety, graded AU-58 and AU-55 respectively. The coins in this trio are very original, barely circulated and very special coins that should attract considerable interest from advanced collectors hoping to complete their Draped Bust Dime collections.

As we can see from this brief preview the coins in the Pogue collection are absolutely outstanding, and these are just some of the first 60 lots out of what will be a multiple-sale auction with about 650 lots. The catalog continues with quarter dollars, half dollars and quarter eagles, many of which are extremely rare and once again offered in remarkable state of preseveration. In the next article we will highlight a selection of the spectacular early quarter dollar collection, as well as some of the half dollars and quarter eagles that round up the first sale of the Pogue Collection.