In this article we will continue with our preview of the first sale of the D. Brent Pogue collection, held jointly by Stack’s-Bowers and Sotheby’s on May 19 in New York City. Our first article focused on the half dimes and dimes in the sale, and in this second preview article we will take a look at some of the most spectacular quarter dollars, half dollars and quarter eagles. As we mentioned in our first preview article the overall quality of the collection is outstanding, and all of the 128 lots deserve to be mentioned individual in a preview article such as this. Of course we will not be able to cover some of the history of all pieces, but instead we will focus on the rarest of the rare. 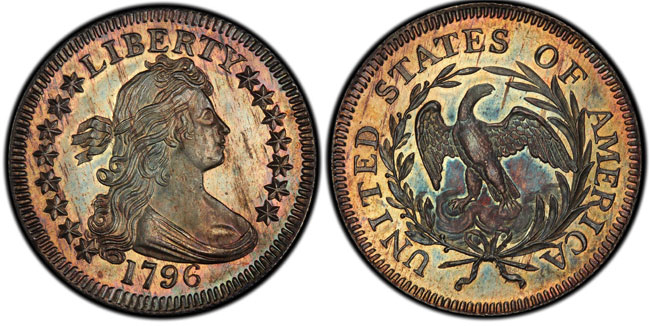 We will start our coverage in this article with lot 1051, which very well could be described as the most spectacular coin in this sale. The coin is a 1796 Draped Bust/Small Eagle Quarter graded MS-66 by PCGS (all coins in the collection are certified by PCGS using special gold-foil labels with the Pogue pedigree prominently displayed). The first quarter struck for circulation, the now much-used denomination was not as popular at the end of the 18th century, and after this issue of 6,146 coins no more quarter dollars would be struck until 1804. By then the reverse design of the silver coins had changed from the small eagle to the heraldic eagle, making the 1796 an even more important one-year type coin. While a number of uncirculated pieces exist, a true premium gem such as the Pogue coin is of course a major rarity. Some have speculated that the coin might be a specimen or proof strike, but not all agree, and PCGS has certified it as a mint state coin.

The next lot, 1052, is the 1804 quarter previously mentioned, which is a very scarce coin in its own right. The Pogue coin, graded MS-64, is one of just three certified by PCGS at that level with none finer. It survives from an original mintage of 6,738 coins and has long been considered a key-date in the early quarter dollar series, which is no surprise with such a tiny mintage. The type would continue to be struck until 1807, making sure that type collectors have some other choices to acquire a high-end example of this type. Still, with a pedigree that includes several noted specialists of the series, the Pogue 1804 quarter should attract considerable attention.

One part of the quarter collection deserves special attention. Proof early quarters are extremely rare issues, struck in extremely limited quantities, with survival numbers that can generally be counted on the fingers of one hand. Never-the-less the Pogue collection offers advanced specialists the chance to purchase up to eight(!) Capped Bust Quarter Proofs, some of which are unique graded proof by PCGS, and virtually all are among the finest known. These extremely rare coins were struck at a time when proofs were irregularly produced at the Philadelphia Mint, with the dies used generally used for business strikes as well. Still, often great care was taken when striking the coins, and the proof Capped Bust Quarters in the Pogue collection show what the United States Mint was capable of in the first part of the 19th century.

The first Proof Capped Bust Quarter offered is lot 1061, an 1820 graded PR-66. The finest of two graded at this level, the toning and eye-appeal of the coin is spectacular. Lot 1066 is an 1821 Proof Capped Bust Quarter with an impressive pedigree, going back to the 19th century, which includes names such as Cleneay, Mills, Earle and Eliasberg. The coin, heralded by many, is graded PR-67. That same grade was given to lot 1068, a B-1 1822 Capped Bust Quarter. Lot 1069 is another Proof 1822 Capped Bust Quarter, struck from the B-2 die pair, graded PR-65. The later coin is particularly interesting as the denomination on the reverse was first punched as 50 C., before being corrected to the correct 25 C. While not the finest Proof of that issue it certainly ranks as the most appealing, as do many coins in the Pogue collection.

If any of these coins were offered in a “normal” auction they would already attract considerable attention, but there are more Capped Bust Quarter Proofs. Of all those mentioned here the highlight is perhaps lot 1076, a PCGS PR-66+ Cameo graded example of the very rare 1827/3/2 quarter dollar. Even though there is a published mintage of 4,000 quarters that year it appears that those were backdated, leaving collectors with just a small number of proofs, a supply that includes both originals and restrikes. Naturally, the Pogue coin is an original, the finest of just nine known to exist. The coin has been known as the finest since at least the middle of the 19th century, and was once part of the Garrett collection.

Still, there are more proofs to come. In 1831 the size of the quarter was reduced, and the Pogue collection includes three more proofs of the newer type. The first year of the type in proof is represented by lot 1082, graded PR-65 Cameo, a piece that is surpassed by just a single coin. That can’t be said for the next proof on offer, lot 1086, which is the absolute finest known (PCGS PR-67 Cameo) example of the 1834 quarter dollar. This date is particularly interesting, as proofs of this issue (and perhaps the Pogue coin as well) were included in the proof sets for which the enigmatic 1804 silver dollar originals were struck (in 1834). The catalog notes that the Pogue coin might be the Sultan of Muscat coin, which would make for one very impressive pedigree. Finally there is lot 1093, which is the finest 1838 Proof Capped Bust Quarter in existence, graded PR-66. In line with the other Proofs discussed this one was once part of another famous collection, in this case the Pittman Collection that was sold by Heritage Auctions in 1998.

Lot 1095 kicks off the half dollars offered in this sale in spectacular fashion. It is the finest known (PCGS MS-64) example known of the first half dollar struck for circulation, the 1794 issue. While not as rare as the silver dollar, half dollars were more widely used at the time, and most survivors are in well circulated condition, with just three uncirculated survivors graded by PCGS in almost 30 years. Of course, the Pogue collection coin is a notable exception to this rule, and it is certainly the most definitive 1794 half dollar. Pedigreed back to the Boyd collection (among others) the coin lacks the spectacular toning seen on many of the Pogue collection coins, but the technically quality and overall originality is as strong as you could expect for a coin meant to circulate in the 18th century.

One of the most desirable types of the United States series is the Draped Bust/Small Eagle half dollar struck in 1796 and 1797. Those two years United States Mint struck just 3,918 coins of this type, and the supply of survivors is very limited (a couple hundred at most), making it a very challenging type coin. Of the small number of coins struck the ultimate coin of the type is offered as lot 1100 in the first sale of the Pogue collection. Graded SP-63 by PCGS, the 1796 Overton-101 half dollar offered in that lot is the only specimen of the type even rumored to exist. Simply said, anybody wishing to put together a United States Type Set in top-notch collection will need this coin. Of course, the type is also represented in the Pogue collection by several uncirculated examples, including two of finest known business strike of the type, a 1796 Overton-102 graded MS-66 by PCGS, offered as lot 1102. The piece is complemented by a 1797 Overton-101a also graded MS-66 by PCGS, which is offered as lot 1103. Both are the single finest known for the date, and the pair makes the ultimate “date set” of this elusive type.

After all the silver coins offered in this auction comes a selection of gold quarter eagles to close out the sale. The first, lot 1116, is touted in the catalog as the “most desirable specimen of the first American quarter eagle”. Graded MS-62, the 1796 No Stars quarter eagle is not the finest known by numerical grade (two are graded higher), but the strike and eye-appeal is among the finest of this rare issue, of which just 963 were struck. Stars were added to the obverse that same year, making this also a type coin needed for a complete United States Type set.

The 1796-1797 Draped Bust/Small Eagle half dollars and the 1796 No Stars quarter eagle are both extremely rare type coins, but there’s a third that can be added to this elusive list as well. Offered as lot 1128 (the final coin of this sale) is the single-finest 1808 quarter eagle, graded MS-65 by PCGS. This was the only year that the quarter eagle denomination utilized Robert Scot’s Capped Bust design on the obverse, making it an important type coin as well. Only 2,710 coins were struck, and many of these were melted at a later date, making it a great rarity today. The Pogue collection coin traces its pedigree back to the Parmelee collection of the 1890s and is one of a small number of uncirculated coins that have survived to this day.

When writing this article we had to skip coins that would be a sign of a very advanced collection if offered in any other auction. Simply said, the first part of the Pogue collection contains 128 rarities that are a sign of what is yet to come. The collection includes approximately 650 coins in total, all of which will be offered in joint auctions organized by Stack’s-Bowers and Sotheby’s in the coming years (a full schedule can be found in this press article: http://www.stacksbowers.com/newsmedia/pressreleases/tabid/744/artmid/2700/articleid/64752/stacks-bowers-galleries-announces-the-auction-sale-dates-for-the-d-brent-pogue-collection-.aspx. Of course, we will provide extensive coverage of the auctions, which include many “once in a lifetime” opportunities, starting with a recap of the first auction right after the first 128 cross the auction block on May 17th.