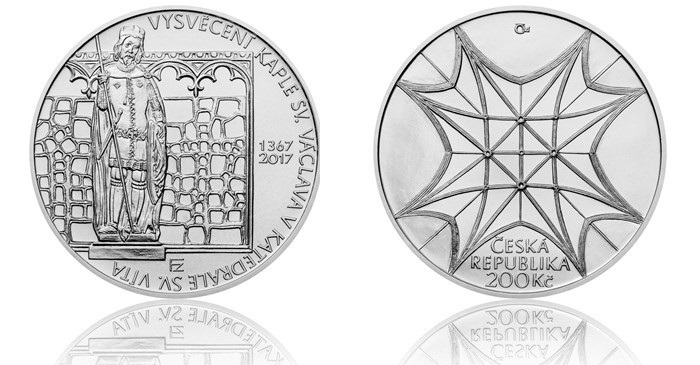 The Czech National Bank have issued (1st December) new collector coins which honour the 650th anniversary of the consecration of one of the most important treasures of medieval architecture: Saint Wenceslas Chapel at Saint Vitus Cathedral. The chapel, the design of which is the work of Peter Parler (1333-1399), the German-Bohemian architect and sculptor from the Parler family of master builders and Holy Roman Emperor Charles IV (1316-1378), which is situated above the tomb of St. Wenceslas. The entire lower half was covered with polished precious stones embedded in gilded stuccoes, and the walls were covered with passion cycle paintings depicting the last events in the life of Jesus in addition to a spectacular depiction of the Emperor Charles IV. The most famous and most significant work of the chapel is the stone statue of St. Wenceslas carved directly by Peter Parler. The chapel was consecrated by the Father of Homeland in 1367 and became a part of the coronation ceremony of the Czech kings. Regardless of religion or denomination, the cathedral is still a spiritual symbol that is dear to the whole nation. 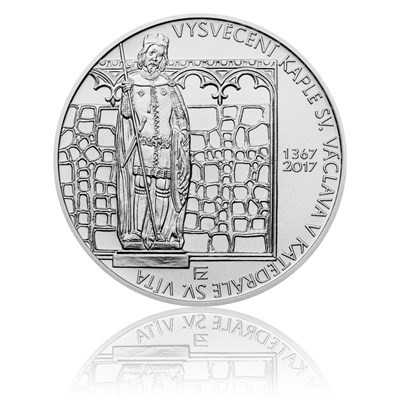 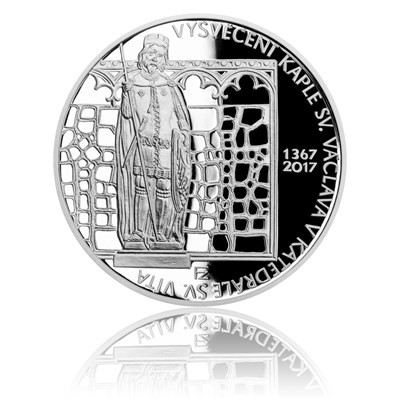 The coins are produced by the Czech Mint at their facilities in northern Bohemia in Jablonec nad Nisou on behalf of the National Bank and are designed by sculptor Zbynek Fojtu. The reverse side of the design was inspired by the ornate decoration of the chapel, the statue of St. Wenceslas, and the intricate wall paneling with a commemorative inscription encircling the primary design including the years 1367-2017. 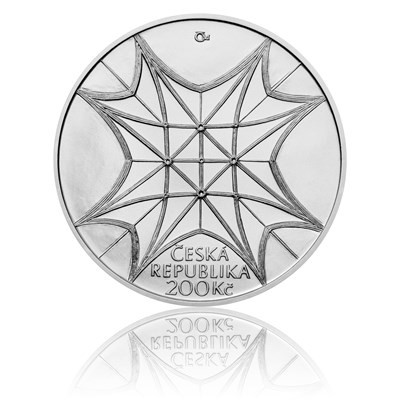 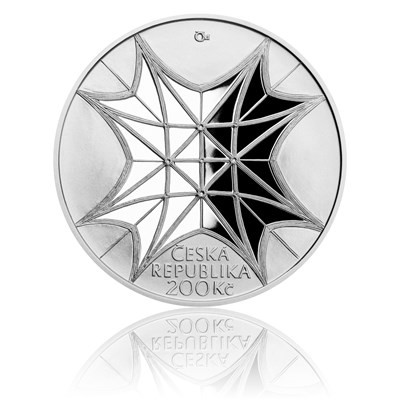 The obverse side of the coin highlights and re-creates the view seen of the high canopy of the star vault. The denomination of 200 Kc is placed below the primary motif. 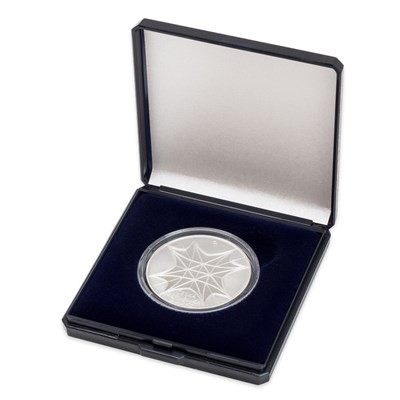 The coins are struck in both Brilliant Uncirculated (BU) and Proof quality with the latter presented in a standard blue case and is accompanied by a certificate of authenticity. Mintage figures are not yet available for either the BU or Proof versions. For additional information on these and other coins issued by the Czech National Bank, please visit the website of the Czech Mint. 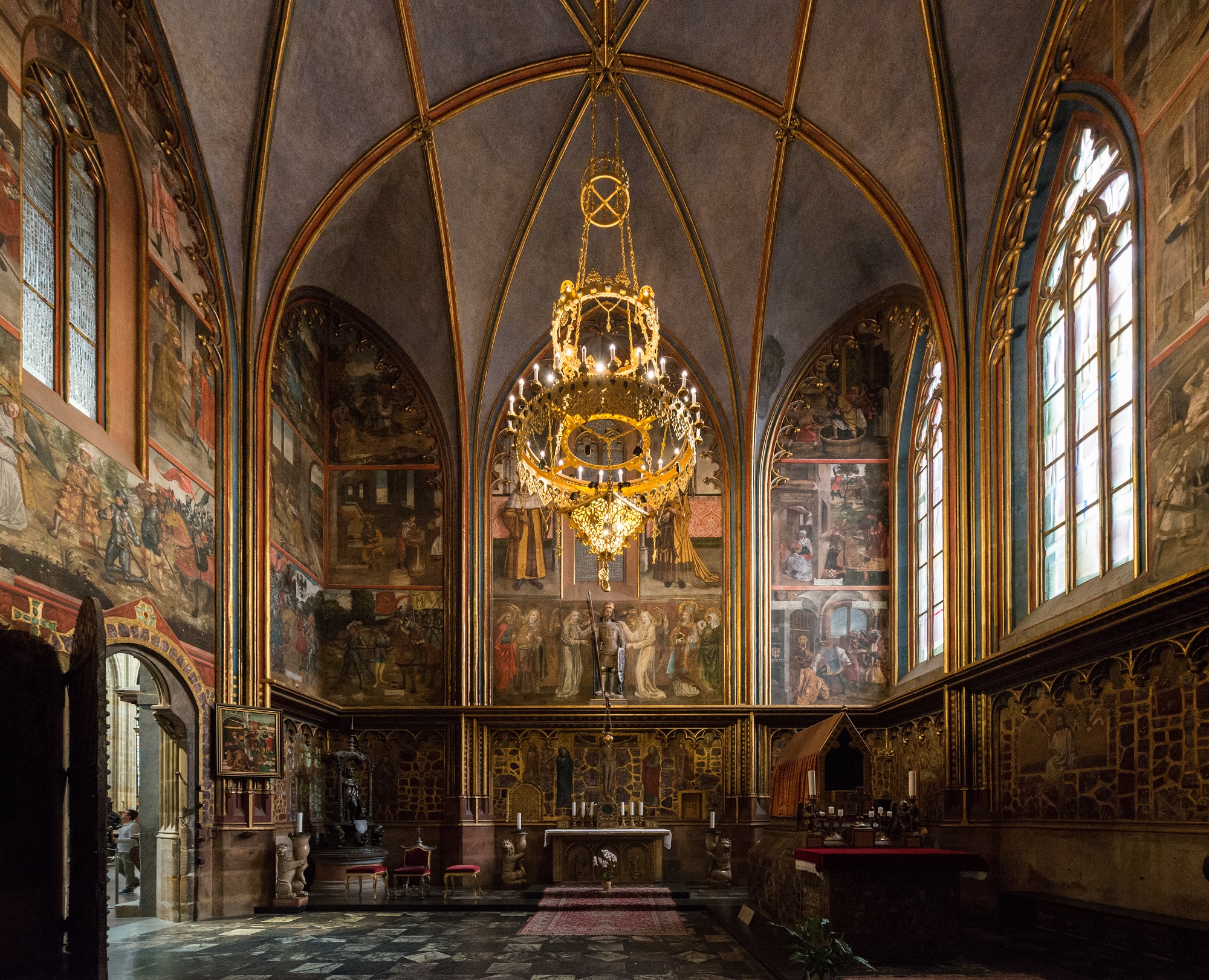 A Chapel Fit for Royalty and Notables Throughout the Centuries: St. Wenceslas Chapel at St. Vitus Cathedral, 1367-2017

One of the most impressive buildings of worship in the Czech Republic which still stands today, the St. Vitus Cathedral is also the largest and the most important temple in Prague. Located within the grounds of Prague Castle and containing the tombs of many Bohemian kings and holy Roman emperors, the cathedral was placed under the official ownership of the Czech government as part of the Prague Castle complex after the restoration of democracy in 1991. The cathedral’s dimensions are 124 by 60 metres (407 feet by 197 feet). The main tower is 96.5 metres (317 feet) high, the front towers are 82 metres (269 feet), and the arch height is 33.2 metres (109 feet).

Apart from religious services, the cathedral served in the capacity of some of the most elaborate and ornate coronations of Czech kings and queens throughout the many centuries since its consecration, with the last one taking place in 1836.

The cathedral also serves as a place of burial of several patron saints, sovereigns, noblemen, and archbishops with ties to the former Austrian-Hungarian Empire, or to the states of Bohemia and Moravia. The cathedral is the third church consecrated to the same saint on the same site with the first such church having been built around the year 925. Prince Wenceslas (907-935), or Václav, founded a Romanesque rotunda on the very site, which after 1060 was converted into a basilica with three naves and two steeples. The importance of the church grew exponentially after the establishment of the Prague bishopric in 973 and the founding of the body of canons. It was the St. Vitus chapter, in particular, which later became an important cultural and administrative institution.

By 1344, Holy Roman Emperor Charles IV began the construction of a Gothic cathedral with its first builders, Matthias of Arras and Peter Parler, who built the chancel with a ring of chapels consisting of St. Wenceslas Chapel, the golden gate, and the lower part of the great south tower. Peter Parler had already started the construction of the south tower, however, he did not live to complete it. Thankfully, his sons Wenzel Parler and Johannes Parler were able to continue his work.

There was a discontinuation of construction on the cathedral in 1419 due to the start of the Bohemian (Hussite) Wars, which involved fighting between pre-Protestant Hussites and the combined forces of Sigismund, Holy Roman Emperor, the Papacy, and various European monarchs loyal to the Catholic Church. In spite of the endeavours of some sovereigns of the day to secure the continuation of the construction, the cathedral remained unfinished for a whole century with even the facade being boarded up.

Sadly, through the cathedral stood only half-finished, it was built to the great tower and a transept, which was closed by a provisional wall. In the place of a three-aisled nave-to-be-built, a timber-roofed construction stood, and services were held separately there from the interior of the choir. Several attempts to continue the work on the cathedral were mostly unsuccessful during the latter half of 15th century when King Vladislav Jagiellon (1456-1516) commissioned the great Renaissance-Gothic architect Benedict Ried to continue the work on the cathedral. Almost as soon as the work began, it was cut short because of lack of funds and later attempts to finish the cathedral only brought some Renaissance and Baroque elements into the Gothic building, most notably the obviously different Baroque spire of the south tower and the great organ in the northern wing of the transept. Fortunately, by the early part of the 16th century, the construction was finished, complete with a Renaissance view gallery and a helmet which, by the middle of the 18th century, the older helmet was replaced by a new dome.

Surprisingly, it would not be until the latter half of the 19th century that a union began the repair of the original part of the cathedral and finished the project in Neo-Gothic style. The church was once again solemnly consecrated in 1929, with its interior changing over the years to adapt. Today, the cathedral is one of Prague’s most visited and popular tourist sites, and also serves in an official capacity for state occasions.