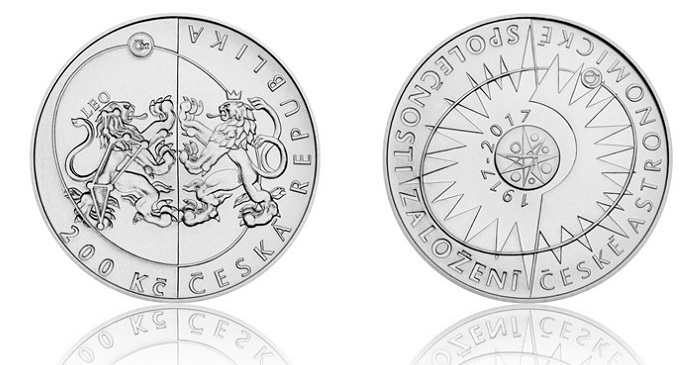 The Czech National Bank have issued (1st December) new collector coins minted in celebration of the centenary anniversary of the Czech Astronomical Society, which was founded on the 8th December 1917, and was located in the capital city of Prague. The history of the Czech Astronomical Society dates back to the first thoughts of its founding before World War I during a time when Czech lands were still a part of the Habsburg monarchy and the Austro-Hungarian Empire. Despite many critical moments during and after the society’s founding, its members have always been able to maintain the tradition of learning and teaching so that the present generation can rightfully be proud of being part of it. 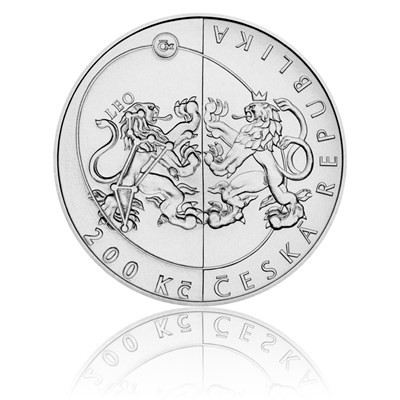 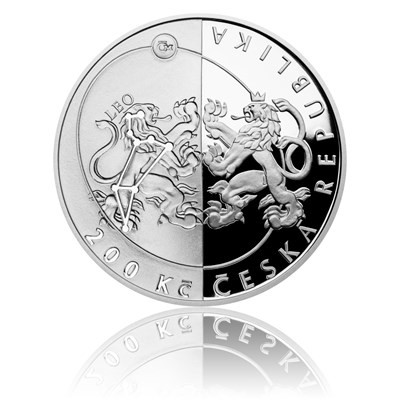 The coins are produced by the Czech Mint in facilities in North Bohemia in Jablonec nad Nisou, on behalf of the National Bank, and are designed by the Czech artist Josef Oplištil. The obverse side depicts two mirror images of the lion, a symbol of the Czech state, which appears on the national crest. On the right side is the positively depicted lion, which is familiar as the heraldic emblem of the Czech Republic. On the left side is the negative image which symbolises the lion constellation (known as “Leo” in Latin). 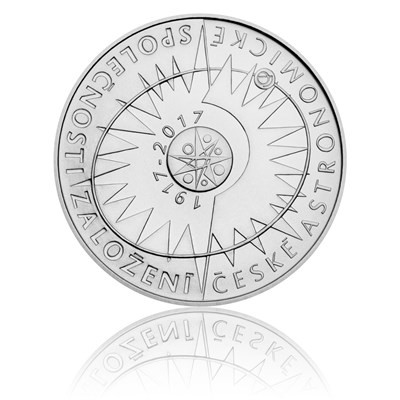 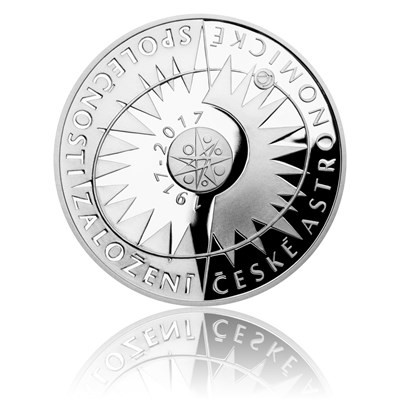 The reverse side is dedicated to the logo of the Czech Astronomical Society, and is stylised in the form of a star around which the planet is circling. The denomination of 200 Kc is placed just under the primary design to the left. 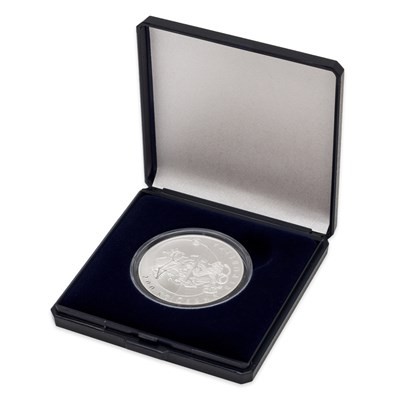 The coins are struck in both Brilliant Uncirculated and Proof quality with the latter presented in a standard blue case with certificate of authenticity. Mintage figures are not yet available for either Brilliant Uncirculated or Proof versions. For additional information on these and other coins issued by the Czech National Bank, please visit the website of the Czech Mint. For additional information on the Czech Astronomical Society, please visit their website.

It was on the 8th December 1917, in the lecture room at the Czech Technical University in Prague, that Professor František Nušla (1867–1951) founded the Czech Astronomical Society (CAS). This culminated in all the years of hard work of Czech and Slovak predecessors and supporters, including a handful of enthusiasts who set out to build a people’s observatory in Prague. After the establishment of Czechoslovakia in 1918, this dream was facilitated by the fact that one of the founders of the state, General Milan Rastislav Štefánik (1880–1919) was himself originally an astronomer. In 1928, the Štefánik Observatory was officially opened in Petřín in honour of one of the country’s founders.

Since 1920, the Society has published a noteworthy journal entitled The Empire of the Stars, which has provided information on the progress of astronomy, not just for Czech students or professors, but for use as a reference around the world. Gradually, astronomical societies, or branches of the CAS, were established in central Europe, especially in the larger cities of Bohemia, Moravia, Silesia, Slovakia, and even Carpathian Ruthenia. During World War II, when Czech schools were closed due to the occupation of the Third Reich, many scholars were replaced or perished, resulting in the post-war generation having to conduct their studies despite an acute lack of professional astronomers.

Traditionally, most observatories are teeming with circles of young people who learn the basics of the scientific method and then apply these formulas to physics and mathematics, in addition to a number of other creative industries. After Czechoslovakia’s Velvet Revolution in 1989, which saw a transition from a communist regime to a democratically elected government and the separation of Czech and Slovakian states, the worldwide contacts of the CAS assisted them in restoring their place as a collective member of the European Astronomical Society. The CAS has since assisted in the emergence of the nationwide astronomical Olympiad, where students from the CAS successfully compete in these international challenges. Many of them have studied astronomy and are well-established both at home and at leading world astronomical institutions in Europe, North, and South America.

Today, the Czech Astronomical Society celebrates the 100th anniversary of their founding. Its legacy is not only to recall the efforts of the founders of the CAS but to bring to the general public the latest findings of astronomy and to show that Czech astronomers are a valid part of the world astronomical community.