The Monnaie de Paris has issued (18th September) two collector coins in tribute to one of the world’s most renowned plays, Cyrano De Bergerac – which highlights the traits of self-doubt and personal triumph – written in 1897 by Edmond Rostand (1868 – 1918) a French poet and dramatist who was associated with neo-romanticism.

The synopsis of the play Cyrano de Bergerac, is that he is a nobleman cadet serving as a soldier in the French Army. Cyrano is a brash, strong-willed man of many talents. In addition to being a remarkable duelist, he is a gifted poet and a musician. However, he has an extremely large nose, which is the reason for his own self-doubt. This doubt prevents him from expressing his love for his distant cousin, the beautiful and intellectual heiress Roxane, as he believes that his ugliness denies him the “dream of being loved by even an ugly woman.” 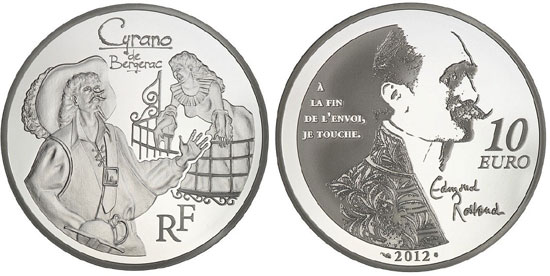 The two coins, one gold and one silver share the same designs. The obverse features a charming and detailed depiction of Cyrano himself during the third act, scene 10 in his ornate cadet uniform as he proclaims his love for Roxanne who listens from her balcony through his compatriot Christian de Neuvillette. Above the primary design is the stylized text “Cyrano De Bergerac” positioned in three lines. Towards the lower right half, the initials “RF” (Republique Francaise). The reverse design depicts a stylized effigy the author Edmond Rostand in the uniform of the Académie française and facing to the right. A facsimile of his signature appears below his image and the coin’s face value of 50 or 10 Euro is placed just to the right of the portrait. The year of issue “2012” is placed below the primary design.

For more information on this and other coins currently on offer from the Monnaie de Paris, please visit their website at: http://www.monnaiedeparis.fr/Art-Culture/Cyrano-Edmond-Rostand-pcodtdvKztilgAAAEvPD4l6HPChUSsE6zm5R8AAAE5QkgDkLSf.html International orders fulfilled – information in French only.