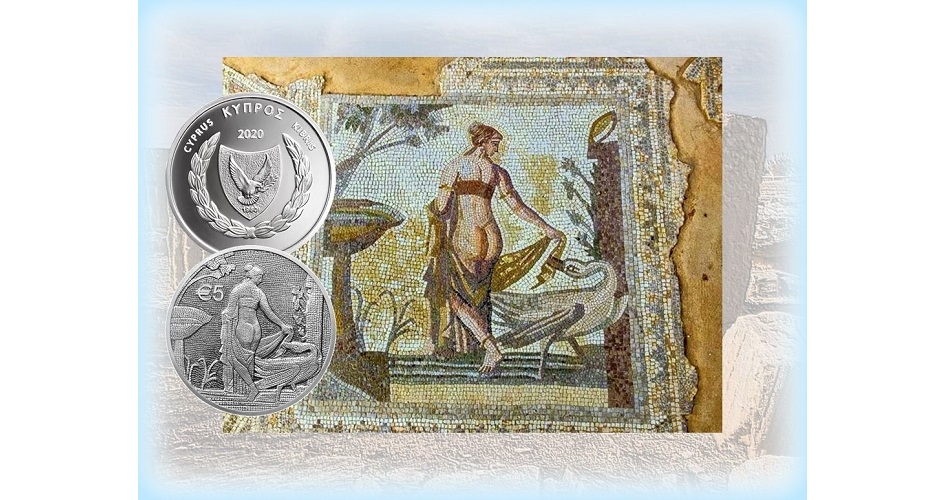 The Central Bank of Cyprus has released (9th November) new silver Proof collector coins which feature one of the country’s most well-known mosaics depicting a scene from the Greek myth Leda and the Swan.

The mosaic captures the moment Leda, wife of the king of Tindáreo Sparta, bathes in a pool near the Eurotas river, and was seduced and possessed by a swan of resplendent whiteness which had pretended to be chased by an eagle. That swan was, in fact, Zeus, who was overcome with Leda’s beauty. That same night Leda has a romantic encounter with her husband, and later she bears two sets of children. The first children, Helena and Pollux, were the children of Zeus and, therefore, immortal. However, the second set of children, Clytemnestra and Castor, the children of her husband Tindaro, king of Sparta, were mortal.

As a tribute to this incredible tale, a beautiful mosaic was created, believed to be dated within the second century A.D. which decorated the floor of a magnificent Roman manor in Paphos, Cyprus. The location was both the birthplace and mythical sanctuary of the goddess of love and fertility, Aphrodite.

The coins were produced by the Hellenic Mint at their facilities in Athens, on behalf of the Central Bank of Cyprus, and were designed by George Stamatopoulos. The obverse side includes a faithful reproduction of the mosaic Leda and the Swan, an outstanding mosaic dating to the second century A.D., which still decorates the floor of a Roman manor house found at Palaipafos. The remnants of the mosaic are on display at the Museum of Kouklia in Pafos district. The denomination of 5€ is placed to the upper-left of the primary focus.

The reverse side includes the emblem of the Cypriot state, which is also that of the Central Bank of Cyprus, including a dove in flight grasping an olive branch in its beak and 1960 under the dove, the year of Cypriot independence. A wreath encircles the shield, and the words ΚΥΠΡΟΣ CYPRUS and KIBRIS are placed over the crest; the year 2020 is seen just under the text.

Sales-interested collectors are asked to complete and submit an application form to the CBC, which is available at the CBC’s website. Applications should be sent by e-mail to by fax to +357 22714930, or by post to Central Bank of Cyprus P.O. Box 25529 CY-1395 Nicosia Cyprus. The CBC will accept applications from 9th November until 6th December 2020. The CBC will respond to each application within five working days from the date of receipt of the application, and reserves the right to reject any application, either in whole or in part.