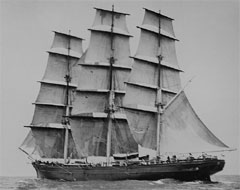 The Perth Mint of Australia has issued a one ounce 99.9% pure silver coin featuring the Cutty Sark. This is the fifth and final release within the series “Ships That Changed the World”.

The clipper Cutty Sark was built in 1869 at Dumbarton, Scotland.  The ship is named after a short chemise or undergarment called a sark. The famous Scottish Poet Robbie Burns created a character called Nannie Dee in his work ‘Tam o’ Shanter’ (1791). In the poem, Ms Dee wore a paisley linen sark that she had worn as a child and had outgrown, which explains why it was too short, or cutty. The vision of Ms Dee dancing in such a short undergarment caused the central character, Tam, to cry out, “Weel done, cutty-sark!” This became a popular catch-phrase of the time and thus the ship was named.

The most famous race of the Cutty Sark took place against Thermopylae in 1872. Both ships started together but Cutty Sark lost her rudder after passing through the Sunda Strait. The captain continued to race with an improvised rudder, yet she was beaten by only one week.

In 1890, she was taken out of the tea races and re-sized for general cargo transport. The Cutty Sark’s history of this period includes tales of tyranny, mutiny, murder, suicide and cholera. In later years, the ship recovered her reputation for speed by winning the wool race ten years out of ten (and beating Thermopylae every time they met). She posted Australia-to-Britain times of as little as 67 days, and in one instance, outsailed the fastest steamship of her age.

In the end, clippers lost out to steamships, which could pass through the recently opened Suez Canal and deliver goods more reliably. In 1916, she was dismasted off the Cape of Good Hope, sold, re-rigged and renamed Maria do Amparo. In 1922, she was restored to her original grandeur and used as a training ship in Greenhithe, Kent, England. In 1954, the Cutty Sark was moved to a custom-built dry-dock at Greenwich and was preserved as a museum ship as part of the National Historic Fleet, Core Collection. While undergoing conservation in 2007, the ship caught fire and was badly damaged, yet she is expected to be restored to her former glory. 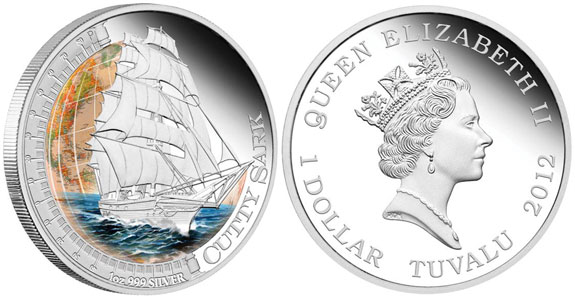 The reverse design of the coin features a depiction of the Cutty Sark in full sail, against a colored background including a globe map. The inscriptions include “Cutty Sark” and “1 oz 999 Silver”. The obverse of the coin includes the Raphael Maklouf effigy of Queen Elizabeth II.

Each coin is struck from one ounce of 99.9% pure silver in proof quality. There is a limited mintage of only 5,000 pieces worldwide. Each coin is housed in a presentation case with a customized shipper and numbered certificate of authenticity.

Previous issues of the series have featured the Santa Maria, Golden Hind, Mayflower, and the USS Constitution.

For additional information on the “Ships That Changed the World” series and placing orders, please visit this page on the Perth Mint’s website.