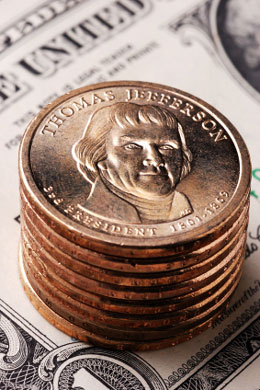 A bipartisan group in the House of Representative has introduced a bill which seeks to remove barriers to the circulation of $1 coins and eventually transition from the $1 Federal Reserve Note to the $1 coin as the only $1 monetary unit issued and circulated by the Federal Reserve System.

The bill H.R. 3305 Currency Optimization, Innovation, and National Savings Act (COINS Act) was introduced on October 22, 2013 and follows the introduction of a similar bill in the Senate on June 6, 2013. Similar bills had also been introduced in both the House and Senate in the 112th Congress.

All of the bills contain similar provisions that call for the a number of actions to be taken by the Board of Governors of the Federal Reserve System to set the stage for the increased prominence and promotion of golden colored $1 coins prior to having the coins completely replace $1 bills in circulation.

The Board of Governors of the Federal Reserve System would be required to sequester all Susan B. Anthony Dollars minted and issued from 1979-1981 and in 1999. These were the first modern small sized $1 coins produced by the United States Mint, which were largely unpopular with the public due to the potential confusion with the quarter dollar.

The sequestered coins may be released at face value and in bulk quantities to dealers in collectible coins or to countries that have adopted the United States dollar as their base unit of exchange. At the end of a one year period, the coins would be treated as obsolete United States coins, but would remain legal tender. A quarterly report would be required detailing the number of coins sequestered, the number of coins in general circulation, and the effort made to reduce both amounts to zero.

The Board of Governors of the Federal Reserve System would also be required to undertake efforts to remove barriers and improve the circulation of the $1 coin. Another quarterly report would be required detailing the efforts, successes of such efforts, specific barriers to circulation, and the extent to which the Federal Reserve System was unable to meet end-user requests for delivery of unmixed quantities of $1 coins. Continuous outreach and education program are also required to be conducted aimed at helping businesses choose the best mix of $1 coins and banknotes to facilitate transactions.

Additional reports would be required annually on efforts to remove barriers to the circulation of Native American Dollars and steps taken to carry out the Act.

After $1 coins have achieved sufficient market penetration and there are adequate supplies available, the $1 coins would replace $1 Federal Reserve notes as the only $1 monetary unit issued and circulated by the Federal Reserve System. A specific deadline is established as the earlier of (1) the date on which the number of $1 coins placed into circulation after the enactment of the Act exceeds 600 million annually; or (2) the date that is four years after the enactment of the Act.

After this deadline, there will be a transition period of one year during which Federal Reserve Banks may not order additional $1 FRNs but may continue to place into circulation notes on hand or those deposited.

Even after the transition to $1 coins have occurred, all $1 FRNs would remain legal tender in the United States. There would also be an allowance for the continued production of $1 FRNs to meet the needs of collectors.

In order for the COINS Act to become law, it must be approved by the Congress and signed by the President. The bills in both the House and Senate have been referred to Committee.