The Royal Dutch Mint have launched the last coin set dated “2012” has been produced primarily for both Curacao and Sint Maarten, formerly part of the Netherlands Antilles.

Following the dissolution of the geo-political entity of the Netherlands Antilles in 2010, the states of Curaçao and Sint Maarten have re-formed into their respective separate constituent countries within the Kingdom of the Netherlands. In accordance with the reformation of these countries, a new authority, the Centrale Bank van Curacao en Sint Maarten has replaced the previous Bank van de Nederlandse Antillen. The new Caribbean Guilder which replaces the Antillean Guilder is scheduled to enter circulation in 2013. 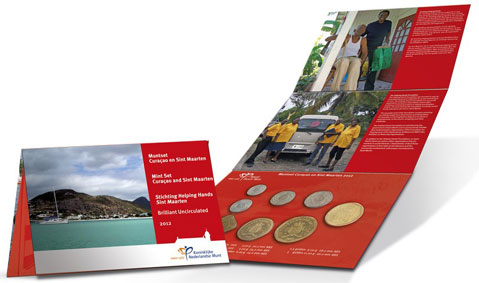 Ranging in denominations from five Guilden to five cents, (together with the distinctive square-shaped 50 cents coin) all coins depict the legend “DE NEDERLANDSCH ANTILLEN” on the reverse. The obverse of the three highest denominations carries the more traditional effigy of HM Queen Beatrix in profile facing left. The coins which currently circulate in both countries are all produced at the Royal Dutch Mint.

The last Antilles coin set is dedicated to “helping hands” or volunteering with the presentation folder highlighting this aspect of Antillean life. The packaged set which denotes “CURACAO and SINT MAARTEN” on the cover consists of eight denominations, from the 1 cent to five Guilders. The four lower denominations are produced in aluminum with the top values being struck in an aluminium-bronze alloy, giving them a golden color. All coins are produced in FDC or specially selected brilliant uncirculated quality. A total mintage of 2000 sets has been authorized.

For more information on this and other coins offered by the Royal Dutch Mint, please visit their website at: http://www.knm.nl/Curaao-en-Sint-Maarten-BU-Set-2012/nl/product/2123/ the information is currently in Dutch – international orders accepted.