The Austrian Mint have issued (9th November) their latest gold coin which depicts the crowns worn by the previous Habsburg Kings and Emperors of Austria – Hungary. The fourth coin in the series features the mysterious crown of Saint Wenceslas, or the crown of Bohemia.

The crown is named in honor of Saint Wenceslas, patron of Bohemia and the Czechs. Crafted in 1347, the Saint Wenceslas crown is made of 21 and 22 karat gold and weighs 2.5 kilos. The crown has four panels, each with a fleur de lys design which is encrusted with 30 emeralds, 19 sapphires, 20 pearls and a large ruby. The crown comes together though two intersecting arches complete with a cross at the very top.

The Saint Wenceslas crown is no ordinary crown. The ominous legend states that anyone who wears it without the right to do so will die within a year. Sadly, this myth seems to have proven to be true, even within the last 100 years. As a consequence of its legend, the crown is securely locked behind not just one lock, but seven locks, deep within the cathedral of St. Vitus. There are seven keys held by seven high-ranking officials of the church as well as the state.  All seven must come together in order to gain access to the crown.  It is very rare indeed; only happening 9 times during the 20th century. 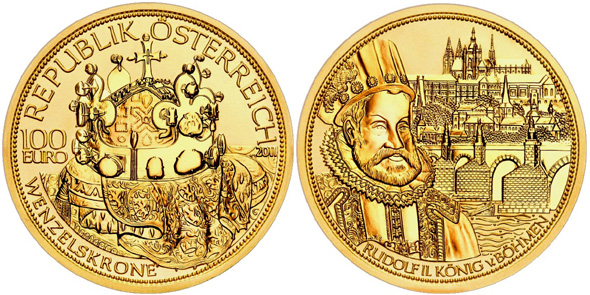 Designed by Austrian Mint engraver Herbert Waehner, the obverse of the coin depicts the stunning gold crafted crown, resting on a cushion draped with a silk cloth embroidered with a repeat pattern of the Bohemian coat of arms featuring its heraldic lion. The text “REPUBLIK OESTERREICH” and the face value of 100 euros, is seen towards the upper portion of the design with the year of issue, “2011” seen at the very end of the text. The text “Wenzelskrone” (crown of Saint Wenceslas) is positioned below and to the left of the crown itself.

The reverse of the coin depicts King Rudolf II in richly embroidered robes. The historic Charles Bridge is in the central design field. The skyline of the old city of Prague and the spires of the famous cathedral of St. Vitus, where the Wenceslas crown is secured is intricately detailed in the background. A ring of beads along the outer edge encircles both sides of the coin.

The coin is struck in .986 fine gold with a weight of 16 grams and a diameter of 30 mm. The total mintage is limited to 30,000 pieces and in proof quality.  A unique lapel pin plated with gold and bearing a miniature version of the Crown of Saint Wenceslas also accompanies the gold coin.

For more information on this and other coins offered by the Austrian Mint, please visit their website at: http://austrian-mint.at/