The Commission of Fine Arts (CFA) and Citizens Coinage Advisory Committee (CCAC) recently reviewed design candidates for a Congressional Gold Medal to be issued honoring the Code Talkers of the Crow Tribe.

The term “Code Talkers” refers to Native Americans who used their tribal languages as a means of secret communication during wartime. Under the Code Talkers Recognition Act of 2008 (Public Law 110-420), tribes with members who served as Code Talkers during a foreign conflict in which the United States was involved were to be honored with the award of a Congressional Gold Medal.The Department of Defense identified 33 eligible tribes. Thus far, the United States Mint has prepared and struck 25 medals with unique designs, with the remaining medals continuing to be developed. 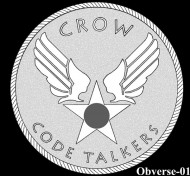 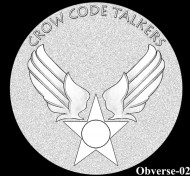 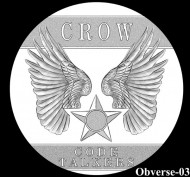 From the available obverse designs, the CFA recommended alternative #1, which matched the preference of the tribe. The Commission members commented on the strength of the abstracted design elements. 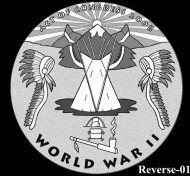 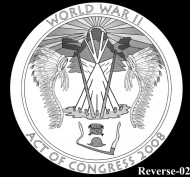 The CFA expressed disappointment for the reverse design alternatives, which feature a rendition of the tribes seal. They commented that the colorful graphic design did not translate well to the medallic form. Nonetheless, the CFA made a recommendation for alternative #2, matching the tribe’s preference.

At the CCAC meeting, Chairman Gary Marks called a motion for the Committee to honor the tribe’s preference and recommend obverse #1 and reverse #1. The motion carried with a unanimous 10-0 vote.

The authority to select the final obverse and reverse designs for the medal rests with the Secretary of the Treasury.

The authorizing legislation provides that after the award of the Congressional Gold Medal, the Smithsonian Institution shall accept and maintain the medal and is encouraged to create a standing exhibit for Native American Code Talkers or Native American veterans. Silver duplicate medals will be awarded to members (or their next of kin or other personal representative) of the recognized Native American tribes who served in the Armed Forces as a code talker. Bronze duplicate medals are expected to be struck and made available for sale to the public.