A few years ago an important question concerning older PCI green holder-slabbed coins was posted on CoinTalk for discussion, asking hobbyists if its grading compared “across the board to NGC or PCGS. … What I mean is if a PCI coin is graded say MS 66, do you think it would grade the same, one grade less or way low if unslabbed and sent to NGC or PCGS?”

The quality of grading is in its consistency, for which NGC and PCGS are renowned. On occasion, NGC and PCGS graders miss the mark by a point or so. Or make a judgment call if a coin is proof-like (PL) or deep mirror proof-like (DMPL). But the process of two graders with a finisher when the first two graders disagree is a fairly reliable system.

We often hear that grading is “subjective.” Of course it is subjective to a degree (a point here and there) but not grossly so, as with some self-slabbers calling extra-fine cleaned coins MS66. I truly dislike that subjective label applied to grading, which suggests anything goes in assessing condition and that consistency is impossible to achieve. The result of that often is that sellers inflate value, claiming subjectivity, with buyers typically on the losing end, as this post later will document.

Let’s return to the “grading is subjective” debate.

In my younger days I was a reporter for United Press International. I covered a jailbreak by Peter Hochstein, C. Michael Anderson and Dan Sheppard. You can still find my article online. Later I learned how they broke out of their cells, although I cannot find my UPI story still online. This is how I remember it: Each prisoner positioned themselves in the cell and observed the jailer’s key unlocking the mechanism. Later they drew what they observed, put the drawings on top of each other, held up the drawings to light and, one day, surprisingly, they matched. Then the prisoners made the key to those dimensions in metal shop. And it worked.

If there is a compelling reason, people see the world as it is rather than how they wish it to be. NGC and PCGS are excellent in this regard because the compelling reason is their reputations as world-class.

Second-tier grading companies, ANACS and ICG, are also very consistent in grading, although not as rigorous as the aforementioned top-tier. The old PCI was somewhat on par with ACG (Accugrade) as third-tier.

You wouldn’t know that looking at “buy” prices for old PCI-labeled coins on eBay. Sellers consistently cite PCGS prices for coins that just don’t measure up.

(Disclaimer: We are not discussing the “new” PCI here, but old green label holders.)

What makes Coingrader Capsule on Coin Update special is that we don’t just share an opinion. We test it, which brings us to the topic at hand.

An elderly local resident’s son-in-law brought to me coins for an appraisal. Unfortunately, his father-in-law was targeted by a phone campaign and bought the following PCI coins at these prices:

I didn’t want to crack out the coins but submit them to PCGS in their PCI holders. (NGC doesn’t consider crossover slabs from any company except PCGS, a practice I have criticized repeatedly and one that still irks; read my previous columns on this to see why.)

Here’s how the coins came back from PCGS: 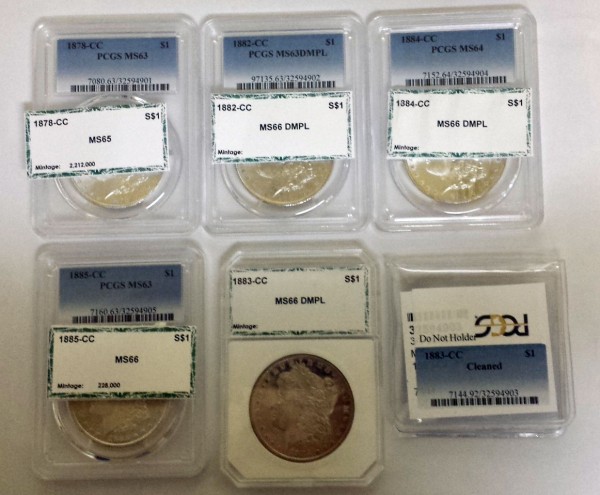 Typically, PCGS retail prices drop by as much as 40% in eBay and Proxibid auctions. (Check CoinFacts for recent auction prices.) As such, this grouping of Morgan dollars might bring about $1260. Both sides of a coin have to be deep mirror, which is why the 1882-CC lost the DMPL designation. But the biggest loss was what my elderly neighbor paid for the coins and what they are really worth, a loss of $13,500 on the high side and $14,340 on the low.

Let this be a lesson to eBayers, both buyers and sellers. PCI-slabbed coins are just not crossover prospects financially. In fact, don’t go by the PCI grade; go by your knowledge of grading.

What do YOU think? Have you bought older PCI green or gold labels and paid too much? too little? Have any crossed over to PCGS or, cracked out of the PCI holders, to NGC?