A few months back we filed a post about yet another crossover attempt, this time focusing on Accugrade coins (ACG), one of the oldest slabbing companies, founded in 1984 by Alan Hager. Many numismatists believe that Hager often got the grade right; so his coins usually are coveted and often tone nicely in their holders. As explained in the earlier post, I also included in this PCGS Crossover submission a green-label PCI, which tends to do well, and an ICG-holdered Morgan. (I had never been able to cross over an ICG coin.)

At the last moment, I also added the 1921 Pilgrim ACG commemorative coin that failed to cross over to PCGS in November 2012. The reason, as we reported in this post? Questionable toning (arg!). ACG coins tone and this one has been in a holder most probably for a quarter century!

I usually am very good at predicting PCGS crossover grades. This time, I was spot on in a few coins and off a point or two in others. 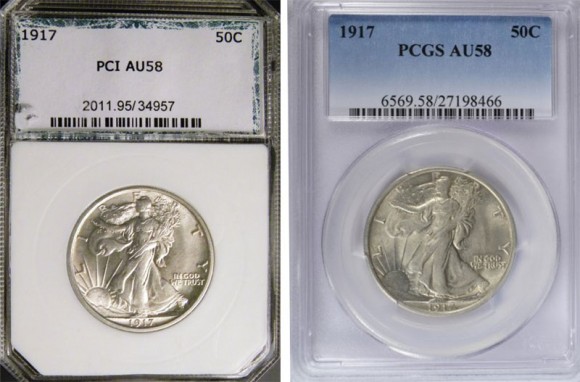 I sent in a 1917 Green Label PCI half dollar, predicting AU50-55. I had concerns about the strike and luster. To my surprise, it crossed over: AU58. 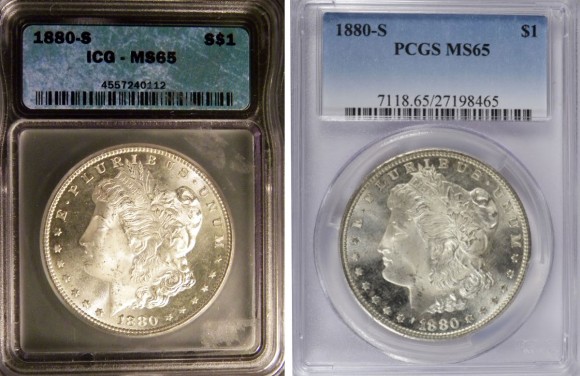 I searched for weeks for an undergraded MS65 ICG coin and found an 1880-S Morgan with full cheek and minimal bag marks. I predicted a crossover. It did: MS65. 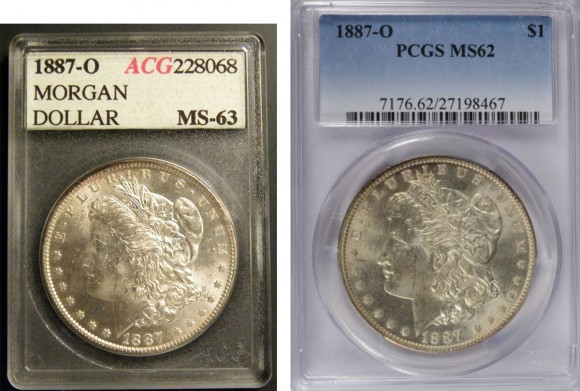 Now on to the primary topic of this post, the ACG coins:

I know that some viewers reading this post may believe that exercises like this and other crossover posts indicate that I may like the holder more than the coin. That’s nonsense. What these exercises attempt to do (and inspire in you) is expertise in grading, the ability to see the same grade as world-class numismatists do within a point or so. Grading is subjective–to a point (pun intended). If one knows the standards–PCGS ones can be found compliments of Photograde Online–one can like the coin rather than the holder for numismatic reasons (luster, devices, tone, strike, etc.).

Predicting grades in crossover submissions–and then comparing your grades to those of the experts–can be gratifying as one learns more about a holdering company’s standards. In turn, this helps when you decide whether to send in a raw coin for grading.

In a word, the whole process is educational. (Sometimes it’s humbling, too!)