This post continues our series titled “Crossover, -under and -out,” or coins with holders by one company being graded at the same, lower or ungradable level by another company, in my case, PCGS.

In my view, PCGS has flaws noted in previous posts but ultimately ranks as the most consistent and rigorous grading company, especially for Morgan silver dollars. Generally speaking, I have found its graders reliable and prompt, although with an increasing propensity to label “Genuine/Ungradable” coins that may (or may not have) questionable color, luster or strike.

I patronize this company because of that consistency and thus must follow its rules, using only its holders in my set registries. So I crossover, -under and -out on a regular basis. 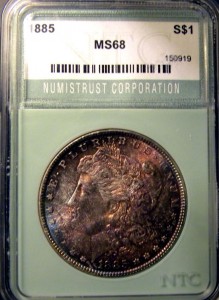 I have purchased several coins at auction from Numistrust, a Coral Springs, Florida, company that “prides itself on conservative grading procedures and the best in customer support.” When purchasing a Numistrust coin, or any, for that matter, by third-tier companies, I pay strict attention to luster. Reason? Only a relative few grading companies are reliable when holdering dipped and cleaned coins.

I cannot recall when I or my hobbyist-friends at Coin Club purchased a doctored coin from PCGS, NGC, ANACS and ICG. Dominion Grading Service, which purchased PCI, also ranks as reliable. Others, not so much.

When it comes to those others, I have a standard that has yet to fail. Photographs of coins, especially on portals like Proxibid, vary considerably because some auctioneers put more effort into visuals than others. Poor photography using inadequate lighting can obscure a coin’s true luster, resulting in the purchase of a dipped or cleaned coin not marked as such on the label or in the auctioneer’s description. To adjust for that, I search for a modern coin at the same online auction, such as a recent Silver Commemorative or Silver Eagle, and use that as a touchstone for Morgan-dollar luster. If the coin photos are comparable, I might buy a coin from Numistrust.

Grading is subjective. One can argue that PCGS grades too rigorously and Numistrust, accurately. The problem with such an argument is that PCGS (with NGC) is the industry standard. Prices are pegged to its grade in the open market.

Numistrust typically may grade 2-5 points higher than PCGS, or at least that has been my experience cherrypicking the former’s coins. But if you are an experienced grader who can adjust for luster and strike online, you might locate a coin such as the 1885 MS68 Numistrust Morgan illustrated here–purchased online for $75. As soon as I viewed the color, and its bright to gradual fade from blue to magenta at the rim on the obverse, I knew I had a “cross-under” winner. 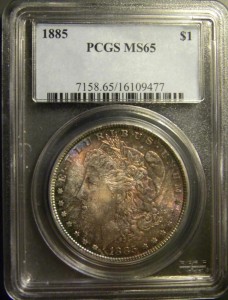 PCGS did not question the color and holdered the coin at gem MS65, worth $155 on the market and as much as $250 because of its rainbow hues.

I’ve seen many complaints online about bottom-tier companies by some of the best numismatists in the business. But I disagree that every coin by these companies is grossly overgraded or otherwise flawed. Once again the lesson involves a buyer’s ability to grade strike and luster in person and online so as to identify dipped, cleaned, colored, doctored and counterfeit coins.

If you master that art, you can profit by purchasing at discount coins from third-tier companies.