I make it a habit of searching local Craigslist advertisements for those selling coins, thinking that one day I will find a deal that will be too good to pass up.  Such an ad appeared on Monday, entitled ‘U.S. & Foreign Coins.’  There were few details, but there was an offer for a detailed list of the U.S. coins to those who were interested.  I was definitely interested, so I sent an email.

I received a list of coins containing $4.15 in pre-1965 silver coins, along with $1.61 in wheat reverse Lincoln cents, 19 nickels dated before 1960, and $4.80 in clad Roosevelt dimes and Kennedy halves.  I did a quick calculation of 13 times the current rate of silver, added in the clad and cents, then rounded it up to the next $5 increment, and replied with an offer of $65, which he accepted.

Last Friday, I met the seller.  He walked up with an envelope bulging with baggies tagged with their contents: ‘Canadian (mostly 1970’s)’, ‘Winged Liberty Head dimes’, ‘Pre-1940 cents’, and so on.  He said a lot of the foreign coins were acquired by either his father or his father-in-law during and after World War II, whereas the Canadian coins were leftovers from a vacation.  We soon shook hands once again and parted ways. 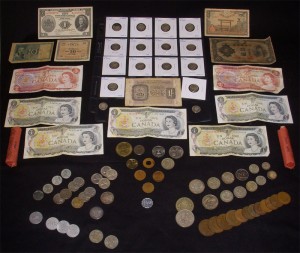 Once home, I sorted through the foreign coins, and found silver coins from Canada, Great Britain, Ireland, Finland, Panama, and the Philippines totaling 1.4024 troy ounces.  The rest of the coins were from the aforementioned countries, as well as Argentina, Aruba, The Bahamas, Denmark, France, Germany, India, Israel, Italy, Mexico, The Netherlands, New Zealand, Spain, Sweden, and Switzerland.

On top of all the coins, the seller had included some bank notes, including two $2 and 5 $1 Canadian notes, 10-yen and 50-yen Japanese notes, a one-shilling note issues by the British Military Authority, a one rupee note for the Dutch East Indies, and two 10 lire notes one issued from Italy dated 1935, and the other issued in Italy as Allied Military Currency dated 1943.

It is my hope to turn a profit from this purchase, and I have high hopes that I will.  Just the intrinsic value of the silver
coins and the current exchange rate for the Canadian notes and coins is worth nearly $100.  Factoring in the nominal value of the other coins, I think I made a really good deal.  I would recommend that collectors keep their eyes open for opportunities such as this: you never know what you might find.