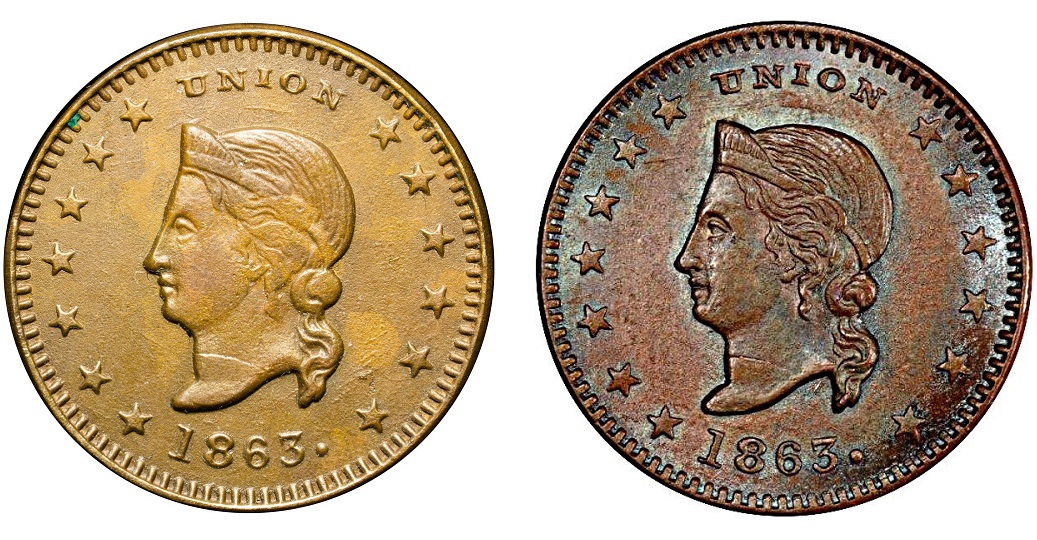 The counterfeit’s reverse (left) is compared to a genuine 1105-type reverse. Notice the mint luster and darker (pure copper) color of the genuine example, as well as superior detail. (Photo by Steve Hayden). Hover to zoom.

Even extremely obscure numismatic items are prone to counterfeit attempts.

A fascinating area of numismatics is tokens struck during the Civil War, including “Store Cards” that show the name of a business. These can sell for hundreds or even thousands of dollars, creating an incentive for counterfeiters. A spurious example of a rare Civil War Store Card from Jackson, Michigan, was recently submitted to Numismatic Guaranty Corporation (NGC).

Instead of being struck, the piece was likely cast, and its details appear quite “mushy.” A normal Mint State example will render finer details (such as in the hair), and even an About Uncirculated coin would appear sharper. The flatness in the center of the obverse could be what the original piece looked like after a weak strike, but is more likely poor casting.

While counterfeits of Patriotic Civil War tokens can be found, examples of counterfeit Store Cards are uncommon. 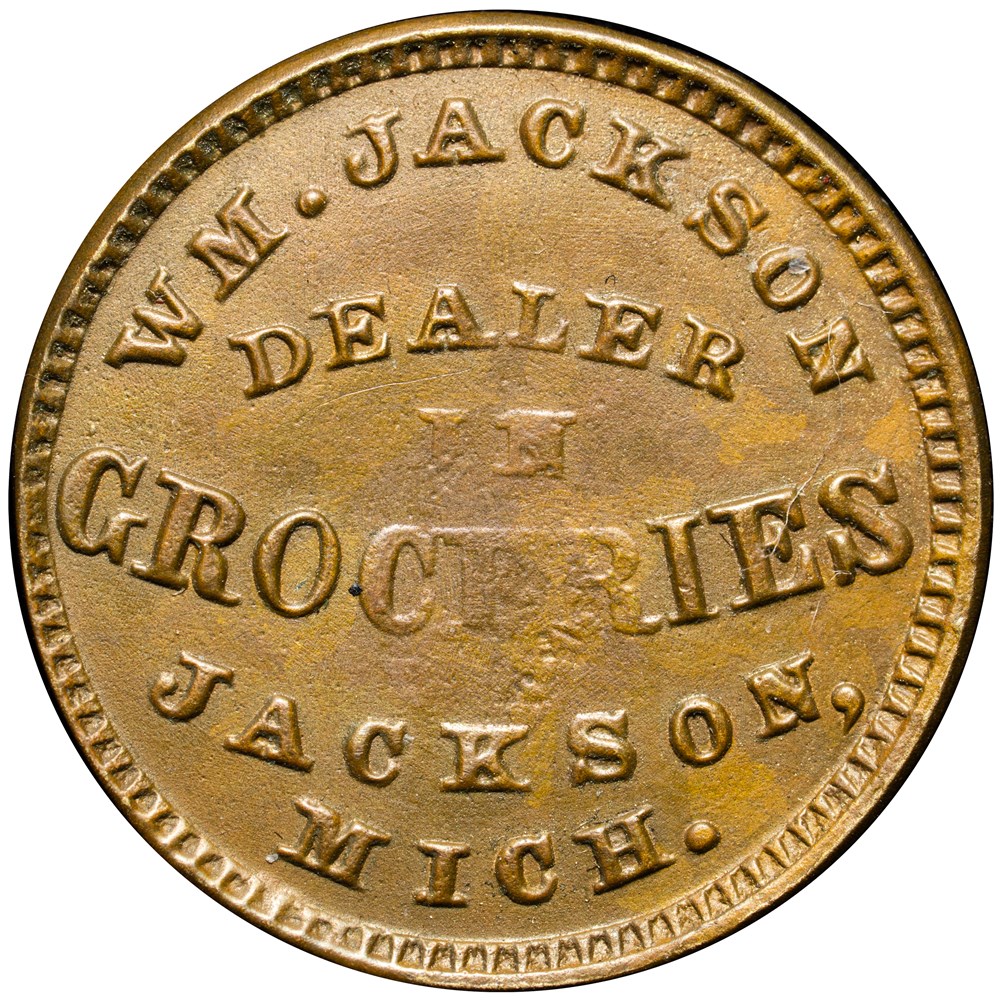 When closely examined, the surfaces of this counterfeit token display a crosshatched-like pattern in the fields. The surfaces also appear lumpy or pitted in some areas. On the reverse, there appear to be a few tool marks in the four o’clock region, as well as above the bust. The edge of the token shows fine ridges, evidence of filing to hide an edge seam — a byproduct of the casting process —which uses a mold for each side.

William Jackson was a grocer in Jackson, Michigan, and his tokens — like many others — were made in the Lanphear shop in Cincinnati. There are 15 varieties of his Store Card. The attribution for this store card is F-525C-11a in the Michigan section of the U.S. Civil War Store Cards reference by George and Melvin Fuld. This variety has the 1105 reverse and has been designated as a Rarity-9, which means there are estimated to be only two to four examples surviving.

A view of the edge of the piece shows fine ridges that indicate the edge was ground down to hide an edge seam.

NGC has certified a genuine example that graded NGC MS-64 BN and exhibits plenty of mint luster with hints of red around the crevices. The above coin, on the other hand, has very dull surfaces.

Fuld’s reference only lists this variety in copper, and examples should test as such if analyzed. The counterfeit piece, however, reads only 86% copper, with 13% zinc and a trace of manganese. While some counterfeit Civil War tokens are made from lead, fakes like this one are made from bronze, which seems to be a common theme.

Thus, this piece would already be an unusual composition for a Civil War token, the majority of which are pure copper. However, bronze examples are common for a few varieties, but these usually run about 90% copper and 10% zinc. Further along the spectrum, brass examples usually show about 70% copper and 30% zinc and are “doorknob yellow” in appearance. It should also be noted that no brass varieties have been documented for this variety.

It is unusual to come across such an obscure counterfeit, which might not catch the eye of the average collector. That’s why it’s always safer to buy NGC-certified tokens and medals, which are guaranteed to be authentic and accurately graded.