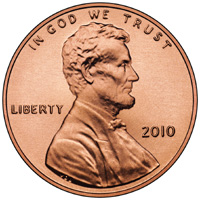 For the fifth year in a row, it cost the United States Mint more than face value to produce and distribute the cent and nickel. For the fiscal year ending, September 30, 2010, the unit cost for the cent was 1.79 cents and the cost of the nickel was 9.22 cents.

For the one cent coin, this represents the highest unit cost on record. Each penny has a composition of 2.5% copper and 97.5% zinc. Although the metal value of each newly minted cent remains below face value, the process of manufacture and distribution push costs higher. For the fiscal year, production of the smallest denomination generated a loss of $27.4 million.

The cost of producing the nickel, remained slightly below the peak of 9.53 cents per coin, reached for the 2007 fiscal year. Each nickel has a composition of 75% copper and 25% nickel. The metal value of a nickel is approximately 6.5 cents. For the current year, production of the denomination resulted in a loss of $15.2 million.

Historical Cost of Producing and Distributing the Penny

Historical Cost of Producing and Distributing the Nickel

During the 2010 fiscal year, the costs of producing the dime, quarter, and dollar coins, each remained below their respective face values. Across all denominations issued for circulation, the US Mint generated $0.49 in seigniorage for each dollar issued. The total seigniorage for the fiscal year was $300.8 million.