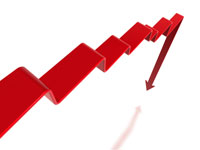 With all the volatility in the gold and silver markets in the past week, I concluded that meant that some really horrible financial news was looming.  Today, the first of what I expect will be several revelations was made public.

The Conference Board reported their monthly Consumer Confidence Index today at 46 (1985 = 100).  That was a huge drop from last month’s Index of 55.9 (now revised to 56.5) and well below consensus expert forecasts of about 56.

The Index is an indication of what consumers anticipate for the short-term business conditions.  A reading of 46 indicates extreme pessimism of the outlook for businesses, which also indicates a horrible jobs outlook.

This report directly contradicts all the neutral and positive news coming out of Washington for the past few years.  Perhaps the biggest reason that this Index is so contrary is that it is privately derived.  The survey for the Conference Board is conducted by the world’s largest research survey firm.  The Conference Board’s incentive is to report accurate data or it will lose paying customers for its research.

In contrast, the US government has a tremendous bias.  In order for politicians and bureaucrats to keep their jobs long term, they have to come out with the most optimistic reports and forecasts possible.  Truth is far less important than maintaining political power.  Unfortunately, too many members of the mainstream financial media take the lazy way out and simply pass along what they get from Washington instead of critically analyzing and questioning what they are being spoon-fed.

Ordinarily, this horrible Consumer Confidence Index report should have had significant severe fallout on the markets.  US stocks should have plummeted (the Dow Jones Industrial Average was down less than 1%), and the US Dollar should have sunk.  Gold and silver prices should have jumped sharply.  None of this happened.

Today was the monthly options expiration date.  The US government and its trading partners had a significant need to try to force the price of gold down below $1,100 as of the COMEX close, so that the more than 5,000 call options at a price of $1,100 per ounce would not be exercised and create the need to deliver more than 500,000 ounces of physical gold.  The COMEX close was barely over $1,100, which means that only some of the options were exercised.  Even those that were called for delivery ended up losing money when you factor in the original cost of the option.

For the past five trading days, there has been a tremendous back and forth between the parties trying to hold down gold and silver prices and those who actually want to take delivery of the physical metal.  The impact of the Conference Board report was blunted amidst all the other price manipulation activity that occurred.

Still, I expect the dismal Consumer Confidence Index news will have continuing influence.  Because of this, look for more investors to lighten up on the US dollar and stocks and bonds and shift into precious metals and other tangible assets.

As more poor economic and financial reports come out in the coming weeks, I expect even more activity of investors getting out of paper and into gold and silver.

The COMEX gold market today ended with the February contract price ten cents higher than the March contract price.  In normal commodity markets, future months trade at higher prices than the spot month, roughly by about the interest cost for the time delay.  The normal condition is called contango.  When the spot month price is higher than one or more future month prices, that is called backwardation.  The COMEX gold market has only been in backwardation for a handful of days in its entire history.  When a commodity is in backwardation, that is a sign of an imminent physical supply squeeze, usually followed by significant price increases.  It this condition persists for a few days, gold (and silver) could be in for an exciting ride.

At the moment, just about all physical gold bullion-priced coins and bars are readily available in 1-2 weeks, other than the US Buffaloes.  In silver products, 100 ounce ingots are being promised for three weeks out delivery, but look like they are actually taking only two weeks to ship.  Other silver coins and bars are either in immediate stock or can be obtained in 1-2 weeks, except for the US Silver Eagle Dollars (which are probably about three weeks out).  If a buying frenzy develops such as we saw late in 2008, current physical supplies could dry up almost overnight and premiums will soar.