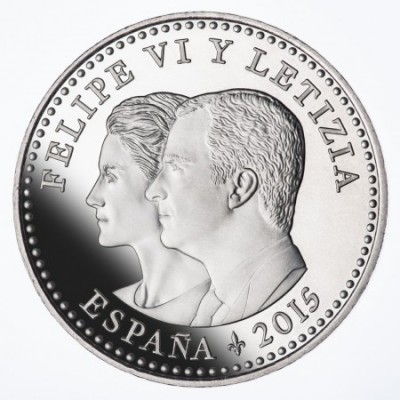 The Fabrica Nacional de Moneda y Timbre – Real Casa de la Moneda has officially announced the new effigies appearing on the mint’s silver face-value coins, issued to celebrate national anniversaries, events, or royal occasions. The portraits were also approved by the Ministry of Finance, which oversees the themes and depictions on all of Spain’s coinage.

The new effigies include profile portraits of Spain’s new King Felipe VI and Queen Letitzia, who succeeded to the Spanish throne in June 2014 after the abdication of HM King Juan Carlos I. The new portraits will be the first time Spain’s new Queen consort Letitzia is depicted on Spanish coinage since the accession of her husband. Dona Letitzia first appeared on Spanish coinage in 2004 on the occasion of her marriage to then-Crown-Prince Felipe, only son of King Juan Carlos.

The portraits, designed by Begoña Castellanos García, show the Royal couple facing to the left, as is traditional for reigning Spanish monarchs since 1870. Dona Letitzia’s profile is positioned first with an overlapping portrait of the King, along with the text FELIPE VI & LETITZIA above the effigies. Below the dual portraits, ESPANA 2015 is inscribed with a fleur-de-lys separating the name of the country and the year of issue. The commemorative circulation type coins have a face value of 30 euro and are struck in sterling silver, with a weight of 18 grams and a diameter of 33 mm.

When the peseta was in use prior to the adoption of the euro in 2002, these circulation type coins, originally introduced in 1994, had a face value of 1000 pesetas before increasing to 1500 pesetas and, finally, 2000 pesetas. The inclusion of the royal couple first occurred in 2001 with the issue of the last peseta commemorative coin. King Juan Carlos I and Queen Sofia were depicted conjointly, a tradition that has been continued for the new royal couple.

The new euro-denominated coins transitioned from 2000 pesetas to 12 euro. Later, their denomination was increased to 20 euro and eventually 30 euro as the cost of silver increased. The new effigies will see their debut on November 11 with the issue of the 2015-dated coin. 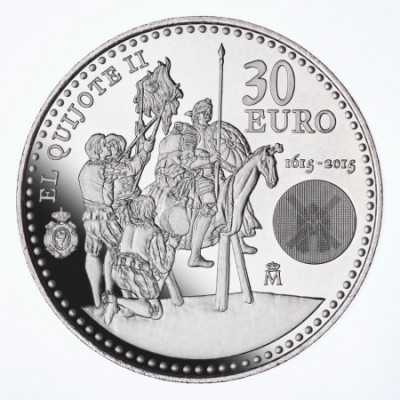 The reverse side of the coin will be dedicated to the second saga of Don Quixote, “The Ingenious Gentleman Don Quixote.” The design reproduces the episode in which Don Quixote and Sancho Panza are tricked into riding a supposed “magical flying horse”–a wooden horse with a peg in its head–to break the spell cast on some bearded women. The clever and innovative quadruple latent image shows a windmill with extended blades.

The coin is expected to have a mintage of one million Uncirculated examples and will be available in commercial channels, such as banks and post offices, for its face value. For more information on the coins offered by the Fabrica Nacional de Moneda y Timbre – Casa Real de la Monedas, please visit their website. Information is offered in English & Spanish, with international orders dispatched where applicable.