The Perth Mint has released a limited mintage commemorative coin to celebrate the introduction of the Australian Commonwealth’s first silver coins in 1910.

The Coinage Act of 1909 led to the replacement of British gold, silver, and bronze coins with the Commonwealth’s own coinage, with the 1910-dated Australian florin, shilling, sixpence, and threepence coins depicting King Edward VII. 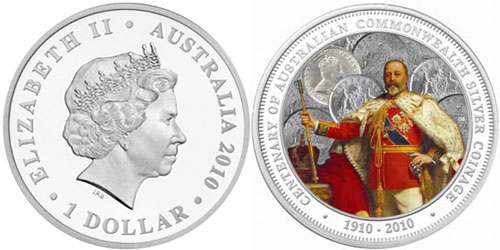 The colored reverse design features King Edward VII and a collection of Australia’s florin, shilling, sixpence, and threepence coins issued in 1910. Encircling the design are inscriptions reading “Centenary of Australian Commonwealth Silver Coinage” and the dates “1910 – 2010”.

The coins are struck in proof quality from one ounce of 99.9% pure silver. The mintage has been limited to 7,500. Each coin is housed in presentation packaging with a numbered certificate of authenticity included.

This will be the first of a two coin series. In 2011, a complementary design will be released to celebrate the centennial of the introduction of the first bronze coins of the Commonwealth Under King George V.