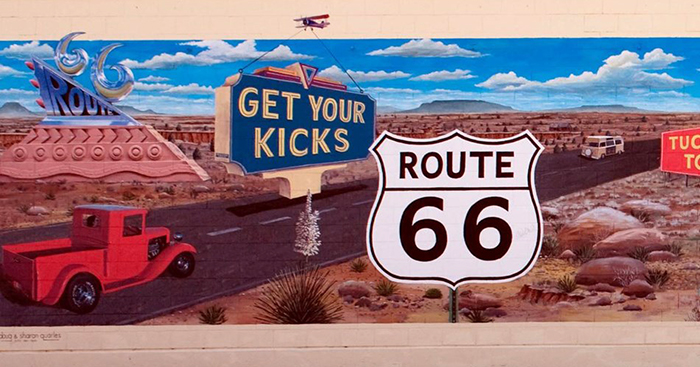 There is little doubt that modern U.S. numismatics needs a jolt. While millions of collectors still look forward to coins like each year’s American Silver and Gold Eagles and the forthcoming 2017 American Palladium Eagle, this segment of the hobby does not seem to attract as much interest as it used to. And nowhere is that more the case than with commemorative coin programs, whose sales have continued to lag in recent years mostly because collectors are not especially interested in either the subjects or the designs, with certain exceptions.

But there now is a possible commemorative coin program whose foundation exists in a bill pending before Congress that should attract widespread interest from both collectors and the public.

On January 3, Rep. Rodney Davis (R-IL) introduced the Route 66 Centennial Commission Act, which is appropriately numbered H.R. 66. The bill calls for the establishment of a commission on the 100th anniversary of the founding of Route 66 in 1926 and directs the Secretary of Transportation “to prepare a plan on the preservation needs of Route 66.” The commission would be composed of 19 members, including two from each of the states that Route 66 ran through (Illinois, Missouri, Kansas, Oklahoma, Texas, New Mexico, Arizona, and California), appointed by the president on the recommendation of their governors, plus three other members also appointed by the president.

The commission will issue a report making recommendations on the most appropriate ways and activities to honor the centennial of Route 66. In Section 8 of the legislation it states the commission may make recommendations that include “the issuance of commemorative coins, medals, certificates of recognition, and postage stamps (italics added).” Since this language does not offer any other details on the coins, separate legislation would presumably be required (or possibly added through amendments to H.R. 66) to lay out what coins would be issued, where surcharges would be directed, and so forth.

Route 66 was the first all-paved highway within the U.S. highway system connecting the Midwest to California. It was the gateway to the West and, during the Great Depression, “the road to opportunity” for millions of Americans who fled the misery of the Dust Bowl in the 1930s. It was dubbed “the Mother Road” in John Steinbeck’s classic novel The Grapes of Wrath. It is also known as the Main Street of America and Will Rogers Highway.

Route 66 was established on November 11, 1926, with signs erected the following year. It originally ran from Chicago to Los Angeles through the states mentioned above. Along the route, entire towns and communities formed whose economies were based on the road and those who traveled it. During World War II it was a key supply route when troops, equipment, and supplies needed to be moved out West to establish industries and military bases. It was popularized through the Route 66 television show, the song “Get Your Kicks on Route 66,” and, more recently, in movies like the animated Pixar feature Cars, and other aspects of popular culture.


It became a symbol of the major postwar economic recovery and boom that took place in the 1950s and 1960s, but “the advent of the interstate [highway] system marked the beginning of the end of the route. The interstate system pushed west, bypassing many small Route 66 communities that depended on the road to support the economies and relegating the route to secondary status through major cities,” said Michael Olson in an August 16, 2013, guest commentary in Coin World. Mr. Olson is an Iowa banker as well as a coin collector, and served on the Citizens Coinage Advisory Commission for four and half years from 2009 to 2014.

The route was decommissioned in 1985, and sections of the road became state roads, local roads, or private drives, or were abandoned. Today Route 66 exists as a patchwork of those various kinds of roads with “Historic Route 66” signage along the way. In addition, various buildings, structures, and segments of the route are listed on the National Register of Historic Places and on the National Park Service website (www.nps.gov/nr/travel/route66). 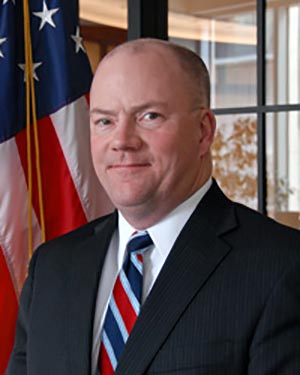 Given this history, it is likely that coins honoring Route 66 would be very popular with coin collectors and non-collectors, and even with non-Americans, since the road is so well known overseas and is a popular tourist destination for foreigners who visit the United States.

In fact, commemorative coins depicting Route 66 were proposed by Mr. Olson when he was on the CCAC, with the first recommendation being made on November 29, 2011. He suggested at the time a series of eight clad half dollars to mark the 90th anniversary of the route in 2016, each bearing a common reverse with each of the eight obverses honoring one of the eight states through which Route 66 traverses. That motion was approved 6-1, and was brought up again during a meeting a year later, on November 27, 2012, when it was approved unanimously.

Mr. Olson told Coin Update, in an exit interview with Les Peters on April 21, 2014, that he recommended a series of coins “depicting the various states and sights along America’s Main Street, Route 66. Can you imagine the possibilities that could be depicted on a half dollar? Route 66 is very popular with many segments of our society for many different reasons, and I think such a series would be historically significant and a commercial success as well.”

Late last year, as Coin Update readers know, the U.S. Senate at the last minute approved legislation to create a series of coins in 2019 honoring the 50th anniversary of the Apollo 11 Moon landing, which was then signed into law by President Obama. Towards the end of his term on the CCAC in 2014, Mr. Olson proposed the Apollo 11 50th-anniversary coins, and over the past couple of years he was the key player outside Congress who worked to lobby members of Congress and the space community to support the legislation to create the coins, as detailed in a February 2017 article by Liz Wheeler in the Northwestern Financial Review.

A key element of the strategy Mr. Olson followed with the Moon-landing coins was to focus on the contributions of every state to the space program. He now suggests a similar strategy for coins honoring Route 66, in this case focusing on the eight original states of the highway.

Mr. Olson, interviewed for the present article, said he still recommends a series of eight clad half dollars but with a common obverse and state-specific reverses, whose designs could be inspired by the unique architecture, landscapes, and important places along the route. And he also thinks doing them in high relief would be even better; if that happens, they would be the first clad high-relief coins ever issued by the U.S. Mint. 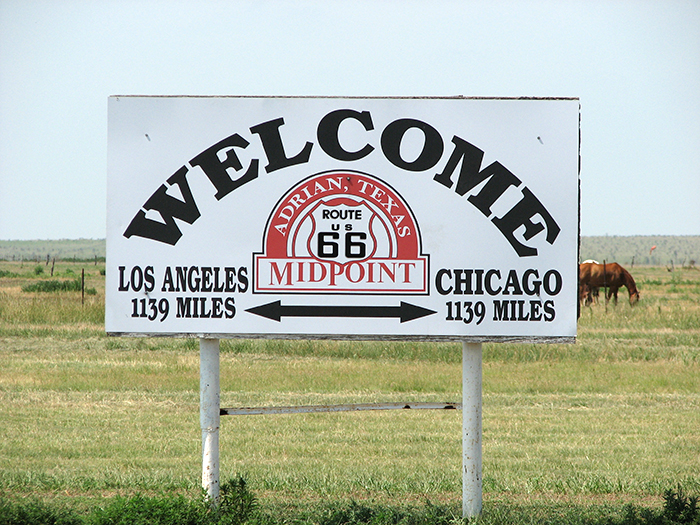 A billboard in Adrian, Texas, marking the exact midpoint of Route 66. (Photo by Questermark)

Some of the themes that came to Mr. Olson’s mind for the possible reverses include the Marsh Rainbow Arch bridge in Kansas, Cadillac Ranch in Texas, and the Chain of Rocks bridge over the Mississippi. He also noted that these coins would be a great way to introduce young collectors “to an American treasure” and to stimulate further interest in the road from American and foreign travelers.

Clad half dollars, usually issued with a maximum mintage of 750,000 coins—which is what the CCAC recommended in 2011 and 2012 for Route 66 coins—are the most accessible U.S. Mint commemorative coins, since they are priced in the $20 range. That would work well with this program, since the coins would likely be of interest to many Americans who do not even collect coins. And while the details would be worked out by Congress, the surcharges could help fund restoration projects for parts of the route as well as some of the educational and related programs suggested in the centennial-commission legislation. 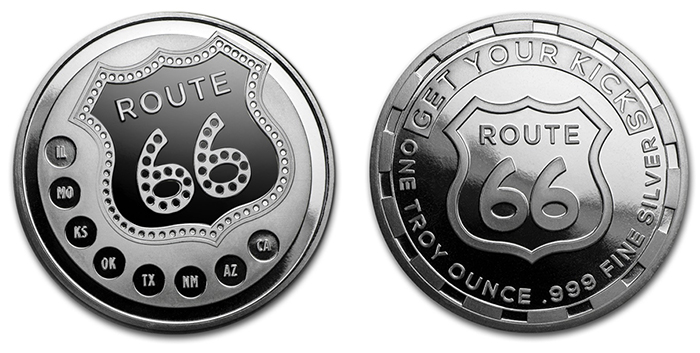 Given the era of the highway’s heyday—the 1950s and ’60s—there’s great potential for stylized designs, as on the obverse and reverse of this silver round from APMEX.

Congress never acted on the CCAC recommendations for a 90th-anniversary Route 66 coin series, despite Mr. Olson’s efforts to lobby on behalf of it after he left the CCAC in 2014. But the forthcoming centennial-commission legislation offers a major opportunity to renew this proposal and make the coins a reality.

The 2026 centennial of the route is obviously a long way off, but the commission should be up and running long before then; this would provide time to develop ideas and support for the coin program and perhaps establish a design competition, since that seems to generate a lot of the most popular designs.

One possible option would be to issue the coins for the 95th anniversary in 2021. At the moment, there is no planned commemorative program for that year, so the timing might work.

As those who followed the Apollo 11 program in the numismatic media last year know, it is not easy to get a bill enacted to create a coin program, and it takes time and a lot of effort by many people. If you support a Route 66 commemorative coin program, it is advisable to start contacting your congressional representatives soon, especially if you live in one of the original Route 66 states, since the members representing those states would be likely to be the first co-sponsors of the coin legislation.

I expect that H.R. 66, the bill that creates the centennial commission, will pass quite easily, as Route 66 is an important part of our shared history and heritage. The bill already has 13 co-sponsors (from those same states) and has been referred to the House Transportation Committee’s Subcommittee on Highways and Transit.

Louis Golino is an award-winning numismatic journalist and writer specializing on modern U.S. and world coins. His work has appeared in Coin World, Coin Week, The Numismatist, Numismatic News, and COINage, among other publications. His first coin-writing position was with Coin Update.   ❑