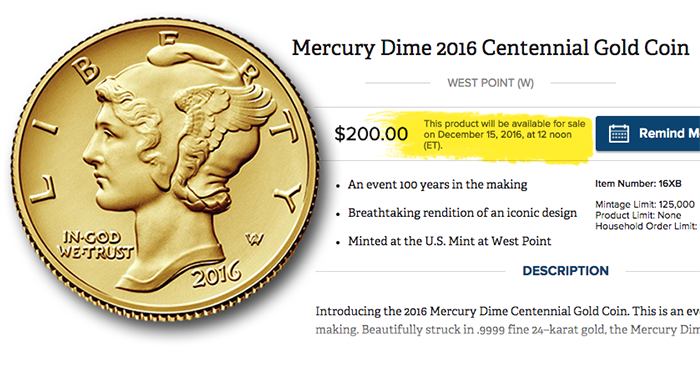 (Washington)—The Mint will reopen sales for the 2016 Mercury Dime Centennial Gold Coin (product code 16XB) on December 15 at noon Eastern Time while supplies last. Orders will be limited to one per household. (Editor’s note: As of last week’s U.S. Mint Sales Report, 116,096 of the mintage limit of 125,000 had been sold. This leaves approximately 8,900 possible coins remaining.)

The coins are beautifully struck in .9999 fine 24-karat gold to celebrate Adolph A. Weinman’s original Winged Liberty Dime design. The coin is commonly referred to as the “Mercury” dime because of Liberty’s resemblance to the Roman god Mercury. Each coin contains 1/10 troy ounce of 24-karat gold, symbolic of the coin’s denomination of one dime, and is struck with a business-strike finish.

The obverse features a portrait of Liberty facing left, wearing a winged cap, with the inscriptions LIBERTY, IN GOD WE TRUST, 2016, and the artist’s initials, AW. The reverse includes a Roman fasces and an olive branch, symbolizing America’s military readiness and desire for peace. Inscriptions are UNITED STATES OF AMERICA, E PLURIBUS UNUM, AU 24K, 1/10 oz., and ONE DIME.

Pricing for the coin is based on the Mint’s pricing schedule for gold and platinum coins. These products are priced according to the range in which they appear on the United States Mint Gold Coin Pricing Grid. (Editor’s note: The coins are currently priced at $200 on the Mint’s site.)

The Mint was created by Congress in 1792 and became part of the Department of the Treasury in 1873. It is the nation’s sole manufacturer of legal-tender coinage and is responsible for producing circulating coinage for the nation to conduct its trade and commerce. The Mint also produces numismatic products, including Proof, Uncirculated, and commemorative coins; Congressional Gold Medals; and silver and gold bullion coins. The Mint’s numismatic programs are self-sustaining and operate at no cost to taxpayers.   ❑