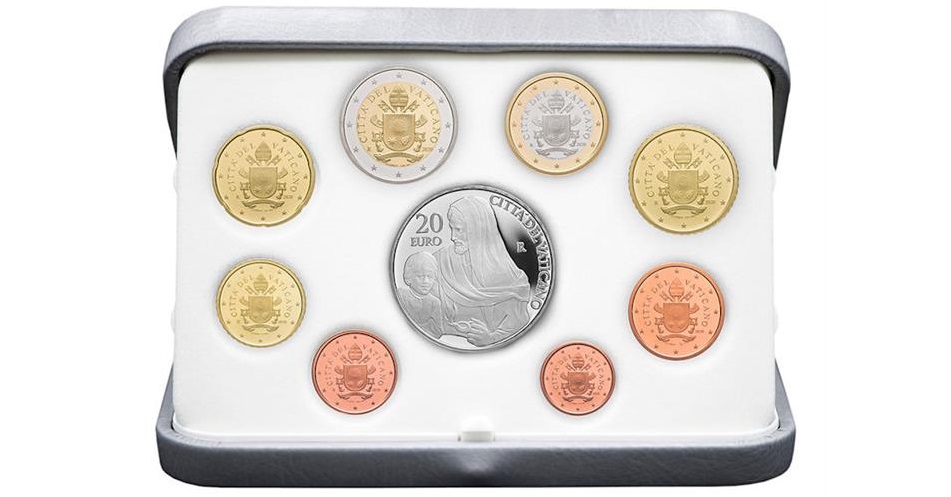 Vatican City, the smallest independent state in the world that was founded in 1929, is located within the Italian capital Rome. Though not a member of the European Union or the eurozone, it has issued coins denominated in euros since 2002 through a bilateral agreement with Italy. Along with three other European microstates (San Marino, Andorra and Monaco), the Vatican is well-known for issuing a wide range of coins aimed at collectors, which are minted by the Italian Mint, as they were before 2002 when denominated as Italian lire.

In 1929 the Holy See (Vatican state) and the Kingdom of Italy entered into a series of agreements known as the Lateran Pacts, which included a 10-year monetary convention in 1930 under which the Vatican would have its coins minted exclusively at the Mint of Rome and those coins would be of the same size, composition, and value as Italian coins and would be accepted within the Vatican, Italy, and San Marino. However, the quantity of coins that could be minted was limited to a set amount.

Those agreements continue to the present day with various modifications. When Italy joined the eurozone in 2002, the amount was set at 600-700,000 euros in value, which was raised to one million euros in 2004. Then, in 2010, the amount was increased again to 2.3 million euros, but 51% of that amount had to go into circulation, which mostly consisted of 50-euro cent coins.

Not surprisingly, with the total face value of coins that can be minted per year so low, modern Vatican coins have typically done well in the marketplace, though the values of many issues have softened considerably in recent years.

The Vatican issues at least two two-euro commemoratives per year in Brilliant Uncirculated and since 2015 also in Proof along with annual mint and Proof sets (the latter with two versions — one with a 20-euro silver coin and the other a 50-euro gold coin) and several silver and gold commemorative issues each year, and starting in 2018 a second version of the mint set that includes a five-euro bimetal coin. Prior to 2012, the annual Proof sets included silver and gold medals rather than coins.

Vatican euro coins are classified under which papacy they were issued, and an image of the current pope normally appears on the obverse of every coin. These include 2002-2004 Pope John Paul II; 2006-2013 Pope Benedict XVI; and, since 2014, Pope Francis. However, since March 2017, the obverses have featured the coat of arms of the Vatican sovereign since Pope Francis made it known that year that he no longer wanted his likeness to appear on coins. The reverse of all Vatican euro coins features the common design used on all euro coins with the denomination and a map of Europe.

Vatican coins typically feature themes that reflect issues the pope of the time stressed, such as in his encyclicals and often depict saints, Jesus, or the Virgin Mary and biblical scenes, or highlight an important work of art from the Vatican collection or pay tribute to a legendary cultural figure. For example, this year, the Vatican issued a five-euro bimetal coin for the 250th anniversary of the birth of German pianist and composer Beethoven in 1770.

While Vatican coins clearly have an important resonance for those of the Catholic faith, non-Catholics and others also appreciate their impressive artistic qualities — a feature that is as true of modern euro Vatican coins as it is of classic Vatican state coins issued from 1929 or papal medals issued since the 15th century.

Recently, the Vatican issued its first coin sold at its face value — a 10-euro copper piece depicting the legendary Pieta statue created by Michelangelo that resides in St. Peter’s basilica and was designed by Italian medallic artist and sculptor Chiara Principe, who has designed many coins for the Vatican and recently discussed her work on this and other coins with me. 43,000 of these coins were issued, and a Proof version limited to 4,500 is coming in October.

For the past 40 years, the UFN (the Italian acronym that translates to English as the “Philatelic and Numismatic Office”) has been the exclusive entity that sells the official coins, medals, and stamps of the Vatican. Interest in these items saw a significant boom after the introduction of the euro, and Vatican coins are especially popular in Italy, Germany, and throughout Europe. The coins issued under the papacy of John Paul II, who was Polish, are popular all over the world because he played an important role in promoting peaceful change in Eastern Europe, especially in his native Poland. Total revenue from the sale of numismatic items is about nine million euros per year, according to UFN’s director Mauro Olivieri.

Starting this year, the UFN will be replaced by three separate offices. As Mr. Olivieri noted:

The changes are designed to increase production and help broaden the appeal of these products beyond those with an interest in religion. 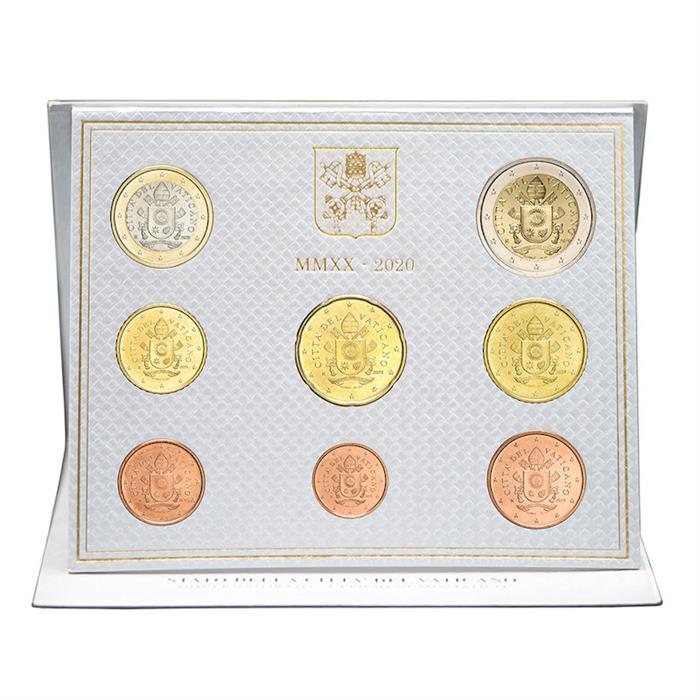 The first euro mint and Proof annual sets issued by the Vatican in 2002 saw their values skyrocket to as much as 1,200 and 1,800 euros, respectively, in 2003, but today have come down to about 250 and 550 euros, which is still an impressive performance, especially for those who bought them at issue prices. That was only possible for those who are on the official UFN subscription list (I joined the list a few years after these sets were issued) and those who waited in long lines in Rome to purchase the sets in person, which sold out quickly and led to a frenzied market with some unscrupulous individuals selling the packaging with no coins or with the Vatican issues replaced with Italian coins. The earliest two-euro coin and sets have also done well, but the market is not nearly as strong today as it was in the past.

Those who buy on the secondary market have seen some items fall below issue price, though subscribers are generally above water or much better on their purchases. This is a great time for someone with an interest in modern Vatican coins to pick up recent coins and sets at reduced prices, such as in eBay auctions. Within the U.S., there is not a very high level of interest today in modern Vatican coins and not many retail sources for them. In some ways, the situation is surprising, since Pope Francis is so popular around the world and with American Catholics. 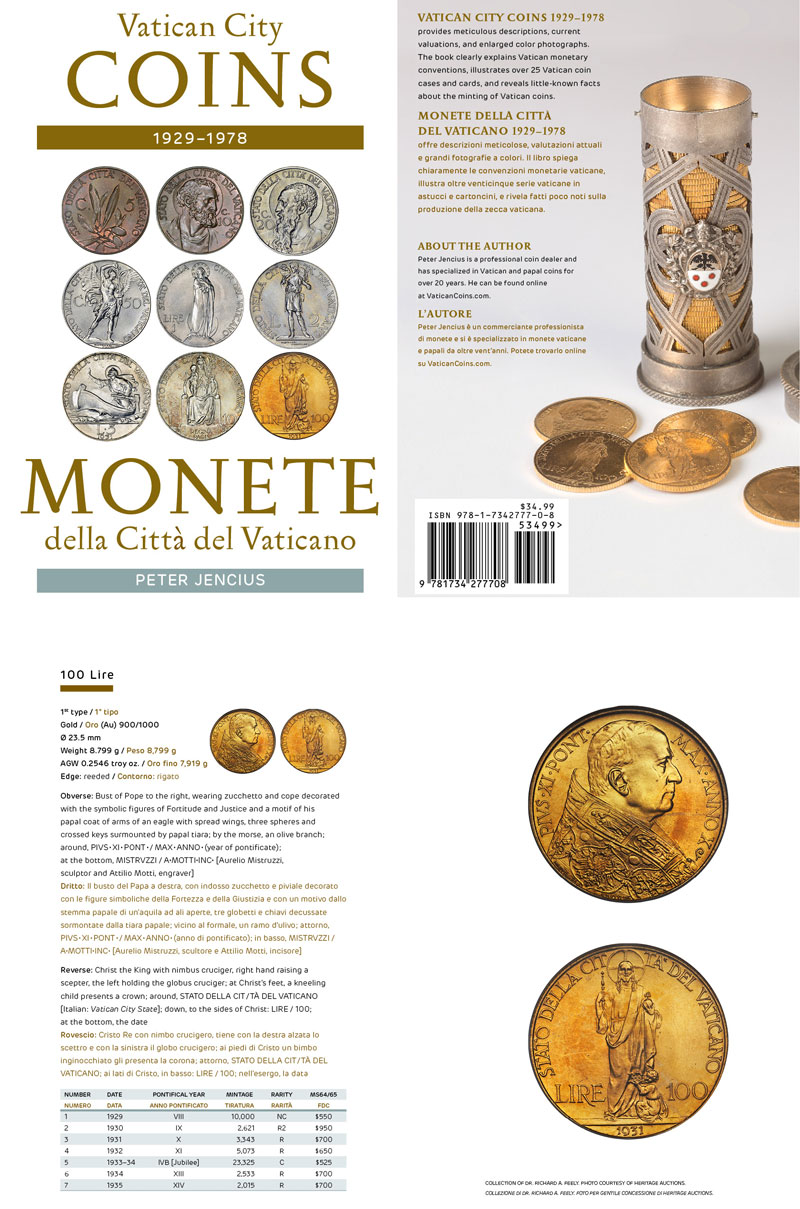 The most well-known U.S. dealer in these coins (who sells a wide range of coins, stamps, medals, and books) is Peter Jencius of Jencius coins in New York City, who took over the business after his father Edward passed away. Peter is also one of the leading experts on classic and modern Vatican issues and self-published an important reference work on the first 50 years of Vatican City coins issued from 1929 to 1978, called Vatican City Coins 1929-1978, late last year. The book is written in English with a side-by-side translation in Italian, since so many Vatican coin collectors are in Italy. Only 500 copies were published, and the book is available here.

The volume explains Vatican monetary conventions, investigates data about when annual issues were actually made, and consider how coins were packaged for collectors. By examining Vatican ordinances, the book corrects some historically printed mintages, provides meticulous descriptions, current valuations from the perspective of someone who knows the real market very well, and features enlarged color photographs of the coins. In addition, it is the first book of its kind that also classifies and illustrates over 25 different Vatican coin cases and coin cards (the latter being a popular way to package euro coins from various countries that is used today for the Brilliant Uncirculated version of Vatican two-euro pieces).

In terms of how the new volume relates to the existing literature on Vatican coins, Peter told me:

In the United States, there’s been two works solely dedicated to Vatican City coins: A slim work from 1969 and a straightforward 1977 book.

The book was issued with two main goals in mind, according to Peter. First, he wanted “to bring the scholarship of Italian coin catalogs to the U.S., combined with original research and study into a single, dedicated work.” Second, he wanted “to expand the idea of a coin catalog” by including context and history that is lacking in the existing straightforward coin catalogs and discussion of the rules governing the issuing of Vatican coins, the coin cases, and other information not found in traditional works.

One of the original discoveries of the book is that apart from the unique 1938 100-lire gold coin, the 1937 coin is the rarest Vatican City gold coin from this period. Despite having a published mintage of 2,000 coins, the piece is very rarely seen and has the fewest examples of any Vatican gold coin graded by NGC. An example sold for $3,900 in a 2017 auction.

In case that gives you the impression that Vatican coins from this era are all pricey, think again. While there are indeed many valuable, low-mintage gold issues and silver coin sets as well as trial strikes issued in minuscule numbers; there are other popular issues like the Sede Vacante coins issued in between papacies when there is no pope. They often feature doves that represent the Holy Spirit. The 1958 five-lire coin of this type that has a mintage of 40,000 only runs $35.

The new volume helps fill important gaps in the literature on pre-euro Vatican City coins. For those interested in the euro period, a good reference is the annual Euro Catalogue issued by Lighthouse in multiple languages.