We are continuing our series on interesting coins costing less than $100 with what is arguably America’s most loved and hated denomination: the cent. We have discussed the Lincoln Wheat cent series in an earlier article, and now we will go further back in time to the Indian Head cent series, which was produced from 1859 to 1909.

These coins played an important role in American commerce over a 50-year period that began before the Civil War and ended in the 20th century. Produced in large quantities most years, there are several rare and scarce dates, some of which — like the 1877 issue, considered the classic key-date of the series — are well-known. Others are lesser known but equally hard to find; for example, true choice VF/XF pieces are incredibly difficult to find for many dates in the 1860s and 1870s. Still, the 1877 completion is an attainable goal for most collectors, as all dates are generally available in the marketplace at any given time, though not in all grades. Let’s take a look at five Indian Head cents that represent a great buy for less than a $100 bill. 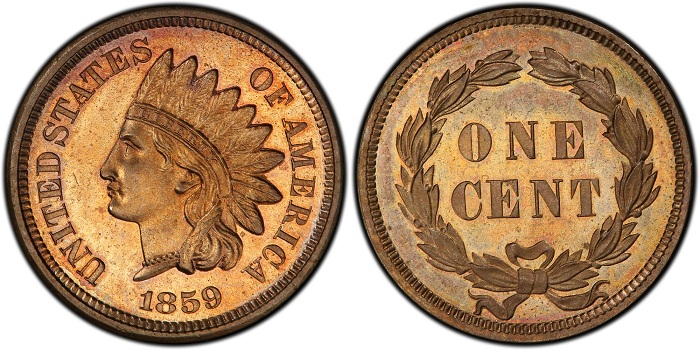 The first year of issue for a given series is always worth studying, and the Indian Head cent is no exception. Even though a small number of patterns dated 1858 are known (they were part of a series of patterns showcasing several possibilities for designs to replace the Flying Eagle cent), production didn’t start until 1859. Struck at the Philadelphia Mint in a copper-nickel composition (giving these coins the nickname “nickel” in the early years), this year had a mintage of 6,420,000 pieces for circulation, and this issue remains easy to find. For $100, however, your pickings are going to be slim, as this is a very popular date in all grades. With some searching, however, you should be able to purchase a decent VG or so. Be wary of corroded pieces that seem a bargain, as these are relatively common for this date.

Spend a little more: You can make it quite expensive if you want to, with true Uncirculated coins easily approaching $1,000, and gems going for much more than that. If you want to stretch your budget a bit for this issue I would recommend finding a PCGS or NGC certified VF-20, a very popular grade that should hold its value well. At the moment such a coin will cost you somewhere around $250-$300. 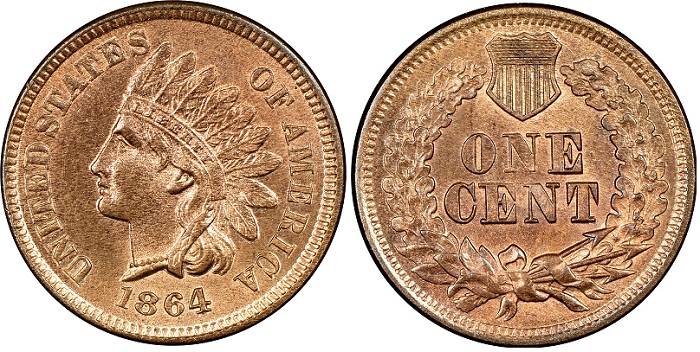 In 1864 the composition of the cent was changed from copper-nickel to bronze, a direct result of the American Civil War, when the copper-nickel coins were massively hoarded. Thinner than the copper-nickel issues, the bronze strikes are easily identified by their thickness and color, which tends to be darker than their predecessors. This date is considered to be relatively available, thanks to its large mintage of over 39 million coins. For $100 you should be able to find a choice AU example with good eye appeal and the historical interest of having been struck during the Civil War. With some luck, a brown Uncirculated example is also possible.

Spend a little more: There are two varieties of the 1864 Bronze cent. The scarcer one has the designer’s initial (L for James Barton Longacre) on the ribbon of Liberty, as well as a pointed bust tip (it is rounded on the more common variety). While lower grades can be found, those showing the L on the ribbon are preferred. A strong VF/XF will show the L clearly, and such a coin can be found for around $200, providing excellent value for this scarcer variety.

While not as rare as the 1877, the 1876 is definitely a semi key-date, with a mintage just shy of eight million. It is not easy to find, but provides excellent value, as a fully original VF+ shouldn’t cost more than $100. As we have mentioned before, finding such a coin might take some time as they are a lot scarcer than many people realize. This is especially true if you are looking for a coin that has all the diamonds on the ribbon showing clearly, as well as a full and clear Liberty, as both areas of the coin tended to wear off quickly in circulation.

Spend a little more: While I personally think a strong VF+ will provide the best value at current levels for this coin, you can always spend a bit more and shoot for an XF, which sells for about $150 or so. AU’s gradually go up from there, as do Uncirculated coins, but they are still surprisingly affordable for a issue with a relative low mintage, commanding about $400 for a brown choice Uncirculated example.

Minor coinage (denominations lower than 10 cents) were traditionally always struck at the Philadelphia Mint, with the exception of a three-cent silver piece struck at the New Orleans Mint for a single year in the 1850s. This changed, however, in 1908, when the San Francisco Mint started to strike one-cent coins as well. The 1908-S is the first example, and it is generally considered a fairly scarce coin, although not as scarce as the 1909-S Indian Head cent, which can be difficult to find. $100 will get you a decent VF+ example, and it shouldn’t be too difficult to find one at that price.

Spend a little more: Nice XF’s come into view when you increase your budget a bit to $150, and even a nice Uncirculated example with brown surfaces will rarely set you back more than $300. For something different, try finding a 1909-S Indian Head cent, which is considerably scarcer. $300 will probably only get you a VG of that date, but it will add the lowest mintage of the series to your collection, as only 309,000 pieces were struck for circulation; this is less than the classic key-date of the next series, the 1909-S VDB Lincoln Wheat cent.

There is just something about holding an appealing Uncirculated example of a classic coin like the Indian Head cent. Luckily for collectors, there are quite a few such pieces available for this series, especially for dates from the 20th century. The 1909 is a slightly better date, but all other dates from 1900 to 1908 are about the same. The lowest mintage of this range is the 1908, with just over 32 million coins produced. $100 will get you a nice PCGS- or NGC-graded MS-64 RB piece, which provides excellent value, especially if you can find one that still has the majority of its original mint color remaining.

Spend a little more: A collector on a budget might not want to spring for one of the finest-known examples of any particular date, which can cost tens of thousands of dollars, but a nice MS-64 RD is probably not out of range for many people, costing right around $300 for most 20th century dates. Look for spotless examples with claims to Gem status, but with perhaps a tiny hit too much; these are an excellent value, as true Gems can easily double in price. Of course, be warned that red copper that is over 100 years old can change color at any point in time, which can cause a huge shift in value. If you are afraid of this happening, look for an appealing MS-65 RB, which gives you a Gem Uncirculated coin with a little less red for about $250.