The philatelic community has long cherished the creation and collection of First Day Stamp Covers. By simply placing a newly introduced stamp on an envelope and having it shipped to an address (therefore having the stamp canceled on the first day of the stamp’s release), a collector has created a philatelic collectible that honors the artistry and symbolism behind the stamp. In more recent times, this practice has been revised and updated in numismatic circles with First Day Coin Covers (FDCC). These items are similar collectibles to the stamp covers, however, they commemorate the first strike and/or circulation release of a newly minted coin. 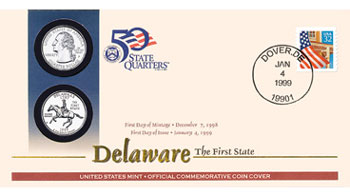 For the typical First Day Coin Cover, the coin (or coins from multiple mints) is mounted in a special holder that allows both sides of the coin to be visible. This holder is then placed in a specially designed envelope that has appropriately placed openings to allows one to view the coin(s). The envelope is then stamped (usually with a stamp whose value equals the standard first class mail rate for that day) and officially canceled by the post office on the day of the release of the newly minted coin. In some instances, the stamp used on the cover may be associated with the design of the coin. Additionally, a special cancellation image related to the coin might be used for ceremonial releases of some new coins.

Some collectors are not fans of FDCCs with the reasoning that the “First Day” moniker means little in relation to the quality of a coin’s design, the grading of the coin itself, or the stated mintage for the coin. However, on the contrary, FDCCs can be intriguing, beautiful and educational in their own right. They are created and sold as much for their informational highlights and presentation aesthetics as they are for any special status the first day of release may portend to the coin itself. 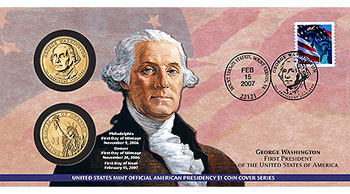 A number of countries have created officially sanctioned coin covers for quite a while now. In the US, collectors and dealers have created their own private FDCC products for many years as well. It has only been in recent times, that the United States Mint has produced official first day coin covers, starting in 1999 to coincide with the beginning of the 50 State Quarters Program. These covers displayed both a P and D mint first day strike of each state quarter with the envelope describing facts related to the origin of the images on the quarters’ reverse and how they relate to the state.

The State Quarters Coin Covers were followed by the P-minted Sacagawea Dollar Coin Cover in 2000, for which the Mint became more creative about the details found on the envelope. In this case, the front displays a beautiful portrait of Sacagawea aiding Lewis and Clark during their journey across the Louisiana Purchase and the reverse describes details of her contribution to the exploration of the American west. From 2004 to 2006, five other first day coin covers were introduced to honor the new Jefferson Nickel reverse designs. In 2007, the Mint continued the tradition of First Day Coin Covers by making one for each new Presidential Dollar coin that was minted.

In 2009, with the release of the six additional quarters to honor the District of Columbia and the United States Territories, the Mint created some of the most beautiful First Day Coin Covers by portraying expansive scenic images of each location on the envelopes. 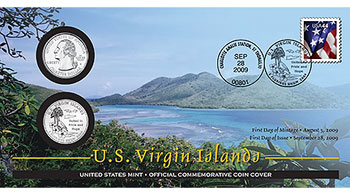 Unfortunately, we have yet to see any further production or evolution of the First Day Coin Covers besides the continuing issuance for the coins of the Presidential Dollar series. No covers were created for the four new Lincoln cent designs in 2009. And as of this date, no coin covers have been scheduled to be produced for the new 2010 Lincoln Cent design or the upcoming America the Beautiful Quarters. We can only hope that the Mint corrects this oversight and for future coins, continues the production this great collectible. But of course, this is also a perfect opportunity for private collectors and dealers to make their own FDCCs for the next set of coin designs.

Read the next article in the series exploring storage and display options for First Day Coin Covers.