In 1916 the Walking Liberty Half Dollar was introduced, replacing the Barber design that had been in use since the early 1890’s and had been prone to a lot of criticism. The new design would become part of a complete redesign of American silver coinage, also resulting in the Mercury Dime, Standing Liberty Quarter and a few years later, the Peace Dollar. Both the Mercury Dime and Walking Liberty Half Dollar would continue to be struck until the 1940’s, leaving a permanent mark on America’s coinage. 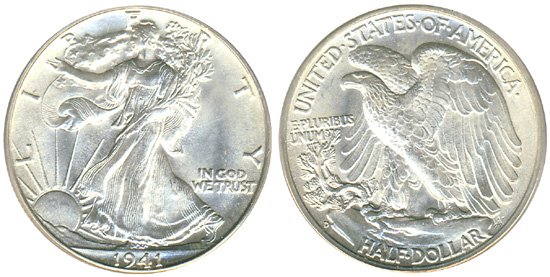 Collectors of the Walking Liberty Half Dollar series are without a doubt aware of the key dates, found in the first decade of the series (such as the 1919-D and the 1921-S). A full set (consisting of 65 coins) is difficult to complete, and will cost a pretty penny in all grades, but especially so in gem uncirculated condition. Like other sets that share the same fate, it is often broken up into shorter periods. There is no exact rule as for the dates of these periods, but the divisions used by coin albums often dating back half a century or more are often used. This is because traditionally many collectors put together sets in these albums. With the advent of third-party grading in the late 1980’s, many coins are now encapsulated in holders, but the breakdown of the albums has remained. 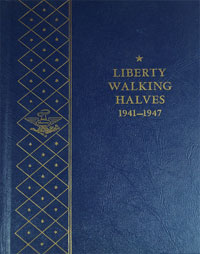 This is the case with the Walking Liberty Half Dollar series, which is usually broken up into two subsets. The first subset, 1916-1940, was contained in the first album Whitman made for the series. The second subset, 1941-1947, was included in the second album. The most expensive coins are found in the first album, which is quite difficult to complete, especially for beginning collectors. The second album, however, consists of 20 coins, none of which are considered to be rarities, ideal for beginning collectors of the series. Because of Whitman’s breakdown of their albums, the concept of collecting a “short-set” was born and this way of collecting remains popular to this day. Over time it has evolved into a legitimate and heavily collected set of one of the most beautiful half dollar designs.

As mentioned above, the set contains 20 coins spread out over seven years Every year includes a Philadelphia, Denver and San Francisco coin except for 1947, when the San Francisco Mint did not strike any half dollars. Mintages of the coins range from 2,151,000 pieces struck for the 1946-D to 47,818,000 made for the 1942. None are prohibitively rare or scarce, and even the 1946-D with the lowest mintage can be acquired for just a little bit over the cost of any of the common dates of the series. Completion of the series in uncirculated condition, or even in certified gem uncirculated (MS-65) grades is possible without much difficulty.

Any collector can go to a medium or large sized coin show in the United States on a given weekend and, if carrying a checking account with enough money, complete the set within a few hours of searching. That does not appear to be much fun, does it? Well, there are a few things that need to be taken into account when it comes to this set that are often forgotten, but which will make the set a lot more interesting and more difficult to complete. 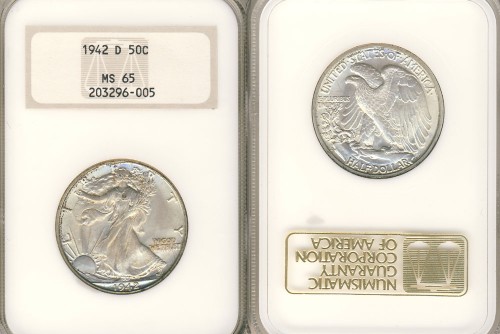 Despite the fact that the coins are all relatively easy to find in even gem condition, there can be problems with some issues. Many coins of this short set, in particular those struck at the San Francisco Mint, and to lesser extent those struck at the Denver Mint, had striking problems. This means that the dies were unable to strike the full design, resulting in weakness in the central part of the design. The cause for this was the spacing of the obverse and reverse die relative to each other. Setting them further apart would increase the number of coins struck from the die pair, but would not bring up the full design. Since the coins of the short set were mostly struck during World War II and money was scarce, it was more economical to set the dies further apart. As a result finding a fully struck coin which shows the thumb of Miss Liberty on the obverse and all the feathers of the eagle on the reverse can be difficult. Fully struck coins might not even exist for some dates. Finding the best struck coin of any given date can involve years of searching and looking through thousands of coins before finding the right one.

Some additional considerations for uncirculated coins include the degree of luster or toning desired. Some collectors may seek out untoned coins that are the most lustrous for their set.  Other collectors may prefer original and lightly toned pieces. These however, can be more difficult to find, creating an additional hurdle for the collector that likes to be challenged.

A factor which may apply to a collection of circulated coins is that some of them may have been cleaned at some point or otherwise impaired. This results in unattractive coins that are best avoided. Rather, coins can be pursued which have a moderate amount of wear and original surfaces.

Whatever your particular focus, assembling a short set of Walking Liberty Half Dollars can be a lot of fun and possibly represent the start of a more challenging endeavor to collect the entire series. As a beginning collector, you might start collecting a 1941-1947 album set of nicely circulated coins. At a later point, you might do the same set in uncirculated or even gem. Then, as more money becomes available, you can include the coins dated 1933 to 1940. And finally, as the last step, you include the earliest dates that are hardest to find, from 1916 to 1932. Walking Liberty Half Dollars provide many opportunities and can really be a lifelong collecting experience.