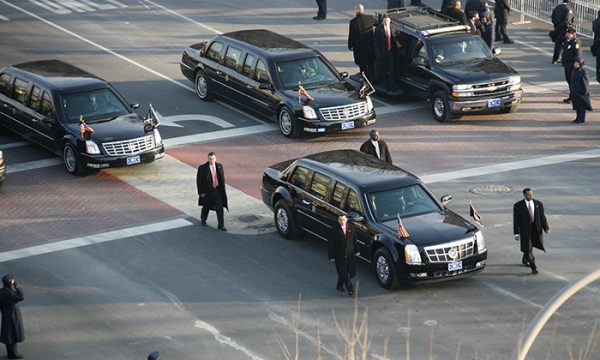 Every year, foreign governments and dignitaries send gifts of all kinds to U.S. federal officials. Such gifts can be accepted if they’re of minimal value and are “offered as souvenirs or marks of courtesy.” For larger gifts, if refusal would “embarrass either the gift-giver or the United States,” the gift may accepted but must be reported to supervisors in the official’s agency. Where it goes afterward depends on the agency. Gifts to the president, for example, go to the National Archives or, later, to a presidential library, while gifts to State Department usually go to the General Services Administration. 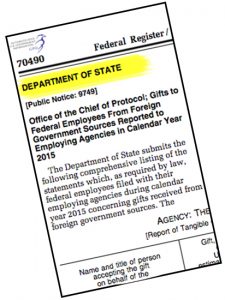 By law, the State Department compiles the gifts into an annual report and publishes it in the Federal Register. The report for calendar year 2015, which was published on October 12, 2016, makes for interesting—and sometimes humorous—reading.

As one might expect, sculptures, books, paintings, ceramics, and other decorative items are popular among gift-givers. Watches are a big thing as well. Silver coffee pots are big. Cuba likes to send cigars, which are handed over to the Secret Service (as are all tobaccos, chocolates, liquors, teas, etc., regardless of the source.)

The gifts often say as much about the givers or the circumstances as they do about the recipients. Some dignitaries, like the king of Spain and Prince Henry of Wales, give framed photos of themselves; others give portraits of the recipients, as when the president of Botswana presented President Obama with a framed pencil sketch of the U.S. chief executive. Others give items associated with their countries: King Willem-Alexander of the Netherlands presented the president and first lady with “personalized bicycle[s] made of black metal with bell,” while President Xi Jinping of China gave “Suzshou embroidery depicting two giant pandas, a mother and her cub, in a circular wooden frame.”

Coins show up on the gift list fairly often, though not as frequently as one might think. Watches and rugs, for example, appear more than 60 times each, while coins appear just 20.

In any case, here are the numismatic offerings on the2015  list of “Gifts to Federal Employees From Foreign Government Sources”:

To the First Lady, Michelle Obama—From the amir of Kuwait, a commemorative coin from “the 5th Anniversary of the Proclamation of His Highness Sheikh Sabah Al-Ahmed Al-Jaber Al-Sabah as the Emir of Kuwait (2006-2011),” plus a case of six small gold-plated silver coins issued by the Central Bank of Kuwait.

To White House Staff Member Susan Rice—From the vice chairman of the Central Military Commission of China, two bronze-colored coins engraved with the donor’s name and image of the Great Wall of China.

To Dr. Jill Biden, Second Lady of the United States—From the amir of the State of Kuwait, a silver coin commemorating the 20th Anniversary of the Liberation of Kuwait and a set of six silver Kuwait 2011 coins in presentation box. 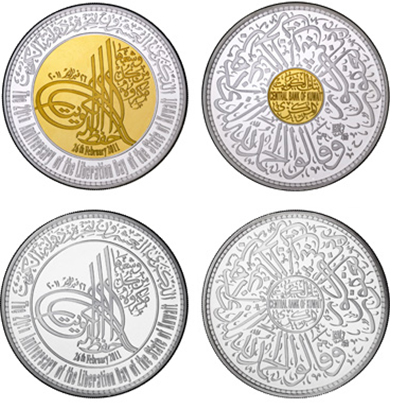 Kuwaiti coins commemorating the 20th anniversary of the liberation of the country. The Federal Register doesn’t indicate whether these were the gifted coins, but it seems likely.

To individuals in the CIA—A gold-plated coin sculpture, two bronze medallions in a leather case, and three silver coins in a leather case. (The CIA apparently doesn’t reveal the identities of those who send it gifts. Also on the CIA’s list of gifts received: cast-metal door knockers, a silver dagger, a magnifying glass, and an antique revolver.)

To an unidentified U.S. Army soldier—From a foreign government official, a 22-carat gold commemorative coin for the 40th anniversary of the National Day of the State of Kuwait.

To Senate members—From the director of the Malaysian Police, commemorative gold coins celebrating the Malaysian Police Force. From King Abdullah of Jordan, a collection of Hashemite coins in a wooden presentation box; a collection of eight replica coins minted in the early 20th century; and the Hashemite coins of His Majesty King Hussein bin Ali minted between 1916 and1924. From the prime minister of the Republic of Tatarstan, Russian Federation, gold coins. and from officials in Malta, a silver bar (presumably plain) and a silver bar bearing an image of the artist Caravaggio. (Does these qualify as bullion? Unknown.)

For the curious, the State Department’s annual lists of federal gifts, going back to 2002, can be found here.