The United States Mint will hold a launch ceremony for the latest release of the new America the Beautiful Quarters Program. The ceremony will take place on June 3, 2010 at 10:30 AM (MT) at the Old Faithful Inn at Yellowstone National Park. 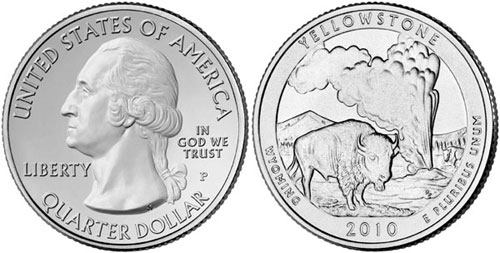 The America the Beautiful Quarters series will include a total of 56 different quarters released over a period of twelve years. Each quarter will feature a unique reverse design representing or depicting a National Park or site from each state, U.S. Territory, and the District of Columbia. The first release of the series was the Hot Springs National Park Quarter, released on April 19, 2010.

The Yellowstone National Park Quarter will be the second release of the series. The reverse design features a depiction of the famous Old Faithful Geyser with American Bison in the foreground and background of the scene. The image was designed and sculpted by Don Everhart. The front of the coin features a portrait of George Washington restored from John Flanagan’s original design for the 1932 Washington Quarter.

Attendees of the launch ceremony will have the opportunity to exchange currency for rolls of the new coins. The exchanges are offered at face value. Children aged 18 years and younger will receive a free quarter to commemorate the event.

Those who cannot attend the ceremony may view a live broadcast on the web at http://www.americathebeautifulquarters.gov.