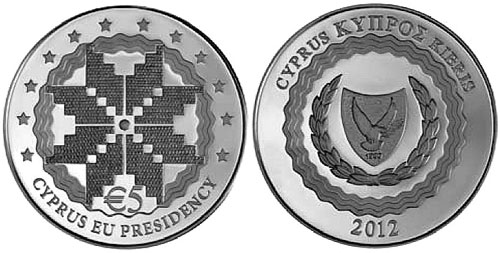 The coin, which is struck by the Greek State Mint, has a 5 Euro face value and is designed by Ioanna Kalli. The obverse design includes a stylized daisy enclosed in wavy circles. The daisy is a motif from “lefkaritiko” lace, the traditional embroidery of Lefkara village. The lefkaritiko embroidery is also included in UNESCO’s Representative List of the Intangible Cultural Heritage of Humanity. It is a characteristic example of the folklore tradition of Cyprus and reflects Cypriot hospitality. The wavy circles around the motif symbolize the Mediterranean Sea surrounding Cyprus. The text “CYPRUS EU PRESIDENCY” is placed just below the primary design along the lower edge with the denomination of “€5” above the text.

The reverse design includes the original emblem of the Republic of Cyprus, enclosed in a circle of wavy lines. The national emblem also coincides with the emblem of the Central Bank of Cyprus. The words “ΚΥΠΡΟΣ”, “CYPRUS” and “KIBRIS” is positioned along the top edge and the year of issue “2012” is seen below the emblem.

Struck in sterling silver to proof quality, the coin weighs 28 grams with a diameter of 38.6 mm. A total mintage of 8,000 pieces has been authorized.

For more information on this and other coins offered by the Central Bank of Cyprus, please visit their website at: http://www.centralbank.gov.cy/nqcontent.cfm?a_id=10862 Interested collectors can also contact sales by e-mail at: