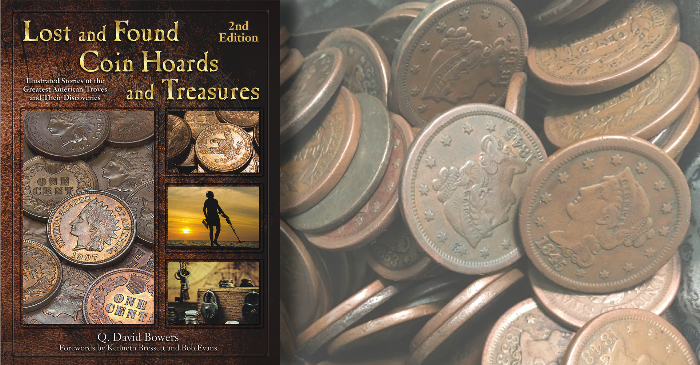 The second edition of Q. David Bowers’s Lost and Found Coin Hoards and Treasures, one of the most exciting coin-collecting books of recent years, has been released by Whitman Publishing. The 480-page hardcover book is available online and in bookstores and hobby shops nationwide. Here, Bowers discusses his research and writing.

Buried treasure! Gold! Pirates! This is the stuff of which dreams are made. When in the early 1950s I discovered the world’s greatest hobby and started building a numismatic library, I was off to a good start in reading about the lore and lure of treasures. Back issues of the American Journal of Numismatics and The Numismatist had many stories and news accounts of coins found hidden in the walls of buildings, buried in chests, or recovered from the sea.

But usually, such narratives were tantalizingly incomplete.

As time went on, I learned more from other magazines, newspapers, books, and elsewhere. I built a “treasure file.” In the 1990s I organized these, corresponded with dozens of collectors, dealers, and researchers, and endeavored to make my information as accurate as possible. Along the way, I learned of many other hoards.

Since then, many things have happened. In 1999, I wrote The Treasure Ship S.S. Brother Jonathan, which details the recovery of double eagles and other coins—based upon my personal and my firm’s involvement in marketing the treasure. And soon after, in 2002, the S.S. Central America was the focus of my 1,055-page book, A History of the California Gold Rush Featuring the Treasure from the S.S. Central America, created with help from Bob Evans and Tommy Thompson (discoverers of the lost ship) and the sponsorship of the California Gold Marketing Group (Dwight Manley and associates). I also wrote The Treasure Ship S.S. New York: Her Story 1837–1846, regarding another find in which I was involved.

Beyond my books, Odyssey Marine Exploration has become a factor in shipwreck treasure recovery, in 2003 and 2004 salvaging more than 51,000 coins from 1,700 feet below the surface of the Atlantic Ocean at the site of the wreck of the S.S. Republic, lost in a hurricane in October 1865. Then, in 2014, Odyssey was commissioned to revisit the Central America site, with more good results. Meanwhile, other finds large and small, on land and at sea, have added to the narrative.

Now, some notes on treasures.

In numismatics, there are many stories of coin treasures that have come to light, most often under circumstances a bit less exciting than written in buccaneer lore, but often quite intriguing. Typically, notices of such finds have been reported first in newspapers or other popular periodicals, often with incomplete or inaccurate information. Then, if a numismatist were consulted, the facts might have been recorded.

Found coins were usually spent, sold, or otherwise scattered without any inventory being made of them. I have reviewed thousands of news accounts of robberies, finds of buried coins, losses of ships laden with coins, and the like, but only a tiny percentage of such narratives have any interesting or important numismatic information. The exceptions form many of the stories given in my book Lost and Found Coin Hoards and Treasures, now in its second edition.

How do hoards come to be? This is a natural question, and one that has many answers. Some groups of coins were buried in yards or hidden in house partitions by wealthy people in an era when there were no banks or safe deposit boxes to offer secure storage. Many coins, including some fabulous cargoes of gold, went down with ships. Still others were concealed in cornerstones, secret compartments, or basement walls.

Uncle Sam also did his share of putting coins away. Bags of sparkling silver dollars were held in Mint and Treasury vaults for many years, only to come forth to delight a new generation of numismatists. Then there is the marvelous story of crates of pattern coins hidden in the Philadelphia Mint for many years, only to be revealed and to figure in an exchange of hitherto unknown $50 gold pieces in 1909.

Some hoards known today were concealed years ago to avoid capture by Indians, or by robbers, or by Yankee troops about to overrun a Louisiana plantation. Certain gold and silver coins found in the Midwest and West were taken in holdups or by some other illegal method and concealed in order to permit fast escape. The idea was that the site of the hidden loot would be visited later and under more leisurely circumstances, and the coins or paper money would be retrieved to be spent and enjoyed. Meanwhile, the crooks might have been killed by members of posses, or jailed by the local sheriff, or sidelined by some other end. After reading accounts of railroad robbers, ship pirates, bank holdups, and marauding soldiers, one can easily conclude that transporting or even owning a large holding of silver and gold coins in the 1700s and early 1800s was fraught with danger.

And reminiscent of the famous “Purloined Letter” story by Nathaniel Hawthorne, still other caches of coins and currency have been hidden in an obvious place—where else?—in a bank vault or in the Treasury Building in Washington. 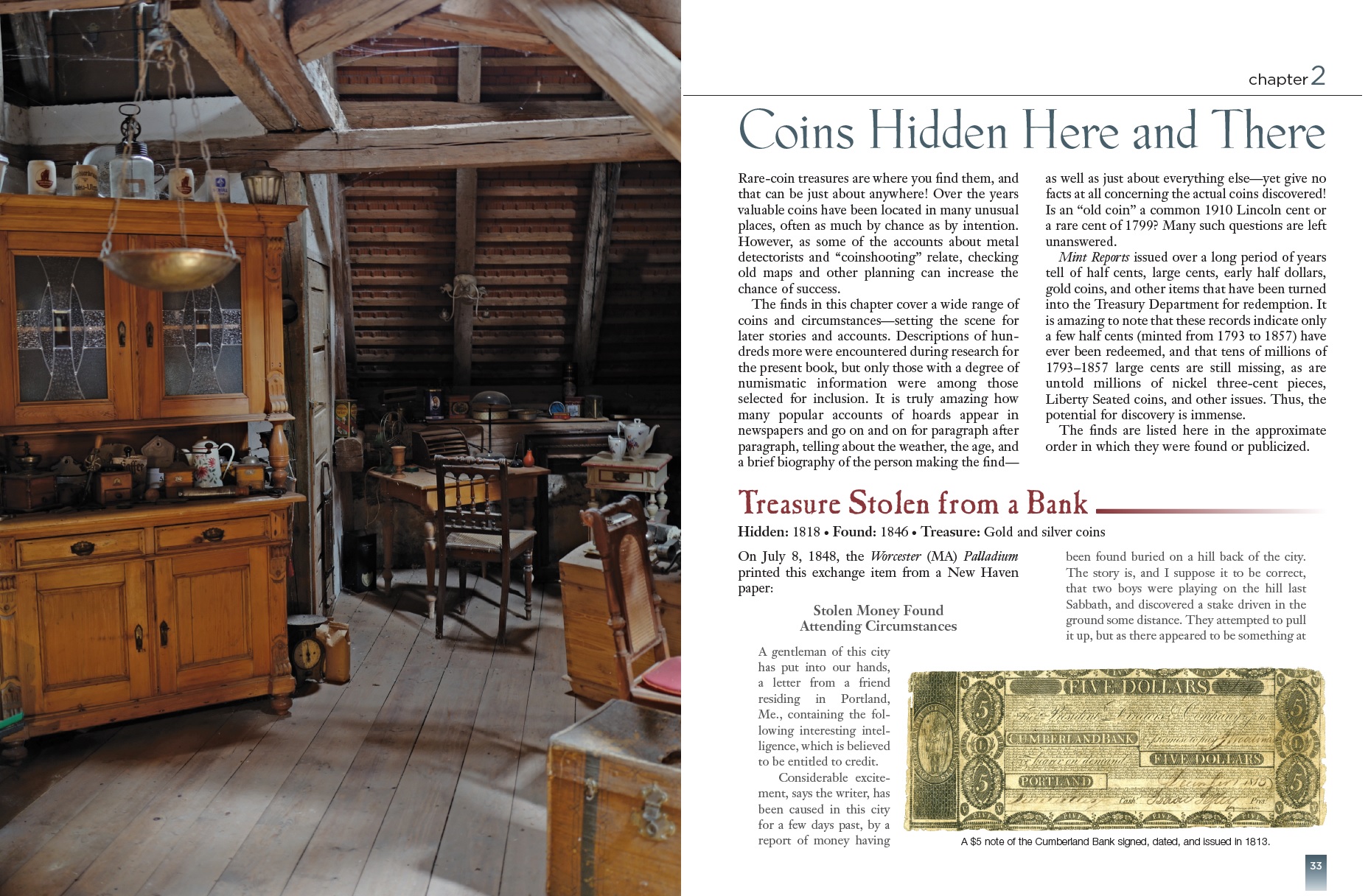 As you read Lost and Found Coin Hoards and Treasures, many reasons why coins were concealed or lost will be revealed. Then again, in numerous instances no one will ever know who secreted these precious coins or why they did, as those involved died years or generations before their treasures were brought to light. For example, we do not know now, and may never know, who hid the thousands of large copper cents of the 1816 to 1820 years in the famous Randall Hoard (named after a later owner of the pieces). 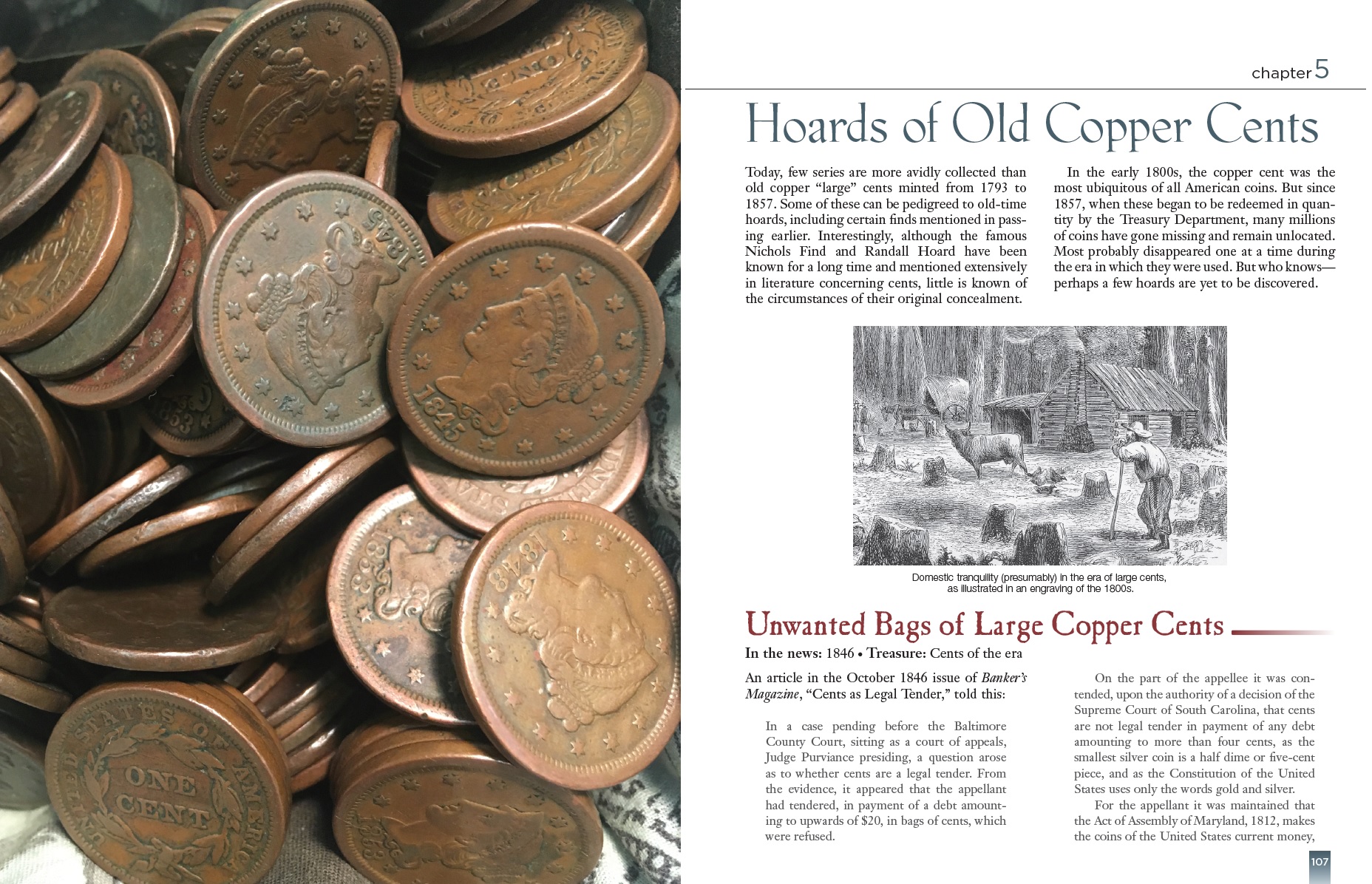 Coins keep their secrets well; they tell no tales as to where they have been, what they have seen, and the roles they played. 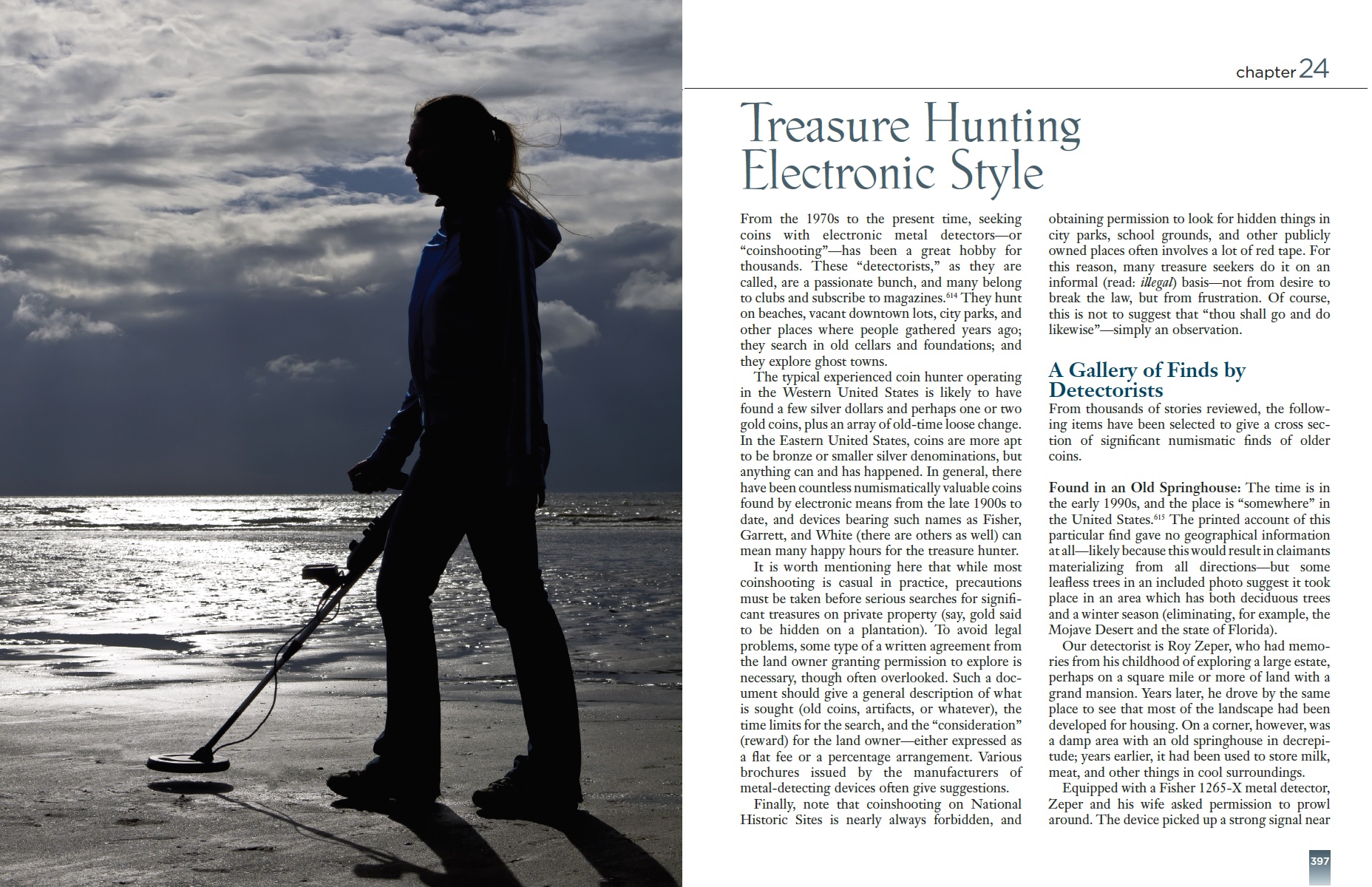 To qualify for inclusion in my book, a hoard or find had to include American coins, paper money, or other numismatic items relating to the United States or its antecedent colonies. Such hoards were mostly found within the borders of our country, but some were not. (The S.S. Central America, the S.S. Republic, and the “Bank of France” treasures are but three examples of exceptions.)

Hoards consisting entirely of foreign coins are not within the scope of his book, but much information on such finds can be found elsewhere.

No listing of hoards can ever be comprehensive, as there are countless thousands of instances in which members of the public have brought long-forgotten rolls, money purses, and other holdings to coin dealers or have otherwise disposed of finds without giving details to the press. Indeed, more than just a few treasure finders have found that publicizing their good luck was about the worst thing they could have done, as the news attracted many who sought to claim part of the coins as their own—based on former ownership of a property, a long-ago insurance settlement, or a modern desire to claim tax liability.

Case in point: While doing research for Lost and Found Coin Hoards and Treasures, I contacted several manufacturers and distributors of electronic treasure-detecting devices, and the typical reply to my inquiries was that “most of the people who find coins with our detectors keep the details secret.”

And in other instances, misinformation has been given out to throw other treasure seekers off the track (e.g., in an 1850s newspaper account of early salvage attempts for the treasure of the S.S. Yankee Blade).

Adding even more intrigue are accounts of the “hoarders among us,” detailing the activities of numismatists such as Virgil M. Brand, George W. Rice, John A. Beck, Colonel E.H.R. Green, and others who were collectors, but who enjoyed squirreling away quantities of favorite items. For example, Brand cornered six of the ten known 1884 silver trade dollars, and Colonel Green had each and every specimen of the five known 1913 Liberty Head nickels.

Finally, chapter 26—”Hoaxes, Fantasies, and Questioned Finds”—discusses holdings of coins and fantasy pieces that have been questioned and are believed to have been made later than the dates they bear or the eras from which they appear to be. Some such “hoards” are not hoards at all, but represent contrived stories: Capers and taradiddles, many of which make fascinating reading today.

All in all, I hope that the accounts in Lost and Found Coin Hoards and Treasures will provide interesting reading, perhaps your own “treasure” of numismatic information and entertainment. Certainly, the book was a lot of fun to research and write. 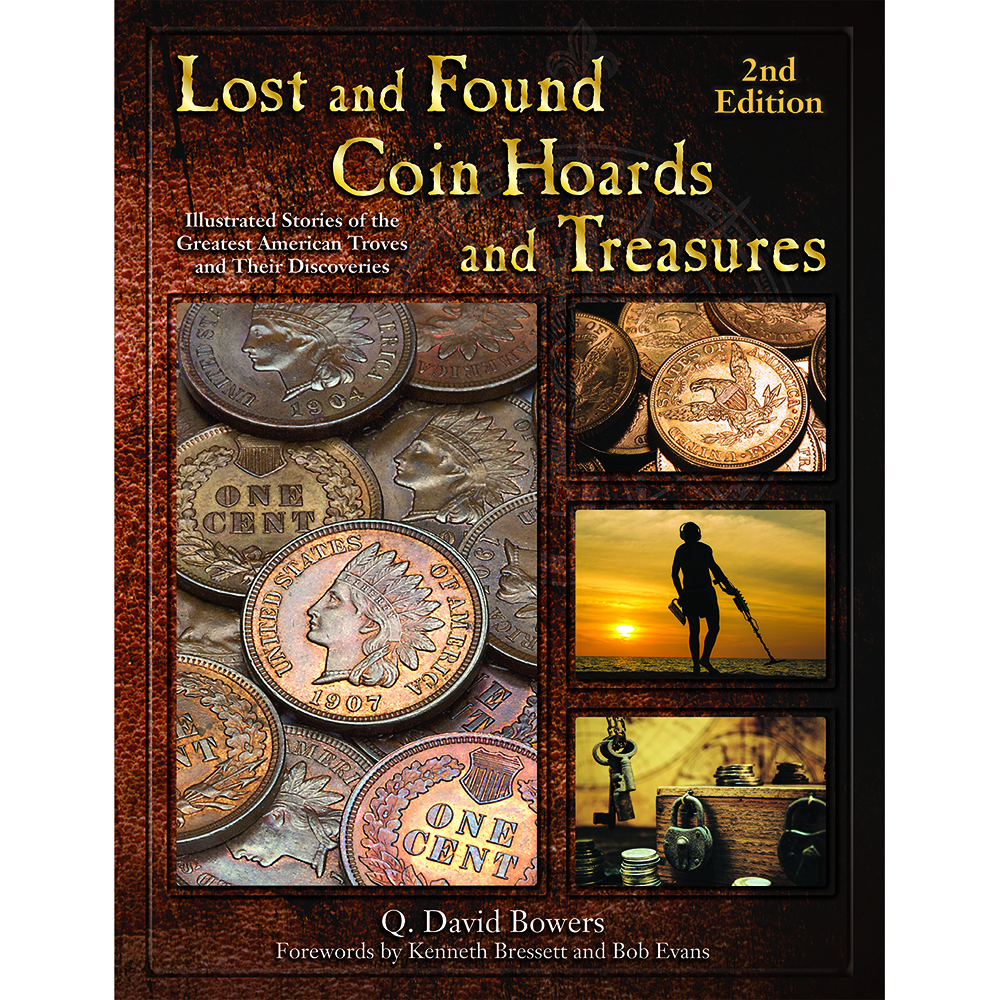