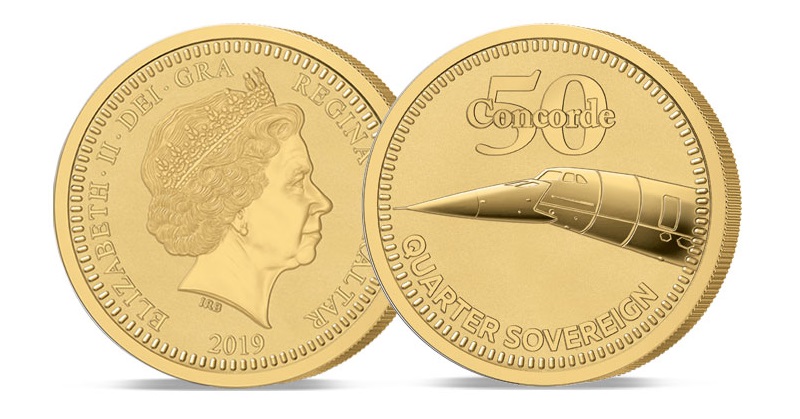 Hattons of London is releasing the world’s first Reverse-Frosted quarter sovereign to celebrate the 50th anniversary of the first supersonic flight of Concorde. The quarter sovereign is the first in a unique set of seven 22-carat coins that honour the record-breaking airliner.

2019 marks 50 years since Concorde’s first-ever supersonic flight, which halved the time of trans-Atlantic crossings — a seminal moment in aviation history. Hattons of London pays tribute with its range, in denominations from quarter sovereign to 50-pound sovereign.

The quarter sovereign shows the distinctive nose of the plane. The world-first design features a Frosted gold background, with images of Concorde struck in relief, or raised.

When the quarter sovereign is aligned in the correct position with the half sovereign and the full sovereign, they form a complete image of Concorde. With its distinctive pointed nose, sleek lines and delta wings, Concorde was unmistakable.

The remaining coins in the set show Concorde in flight over international destinations. The double sovereign features Sydney Harbour; the five-pound sovereign depicts New York; and London is pictured on the 20-pound sovereign, with Big Ben and St. Paul’s Cathedral portrayed on the coin. The final coin in the set, the 50-pound sovereign, shows Concorde in full flight, cruising at an altitude of 60,000 feet and showing the curvature of the earth. A reminder that Concorde flew so high, you could see this from the flight deck.

It’s a great honour to be launching the world’s-first Reverse-Frosted quarter sovereign to celebrate 50 years since the first supersonic flight of  Concorde.

When Concorde first took to the skies, the world watched in awe as an exciting new era of travel roared into life. This 22-carat quarter sovereign, with its groundbreaking and intricate design is the perfect commemoration of this airliner which could fly at twice the speed of sound.

The limited-edition Concorde range is struck in Gibraltar and has been approved by both the Foreign & Commonwealth Office and Buckingham Palace.

About Hattons of London

Hattons of London was founded in 2017 and is the specialist in rare and exclusive coins, providing a bespoke service to new and existing coin collectors.

A leading authority in the coin collecting world, Hattons of London exclusively commissions many world-first coin types and unique ranges to commemorate significant and meaningful events.

Hattons of London has offices in London and an administration office in Newcastle-under-Lyme, Staffs.