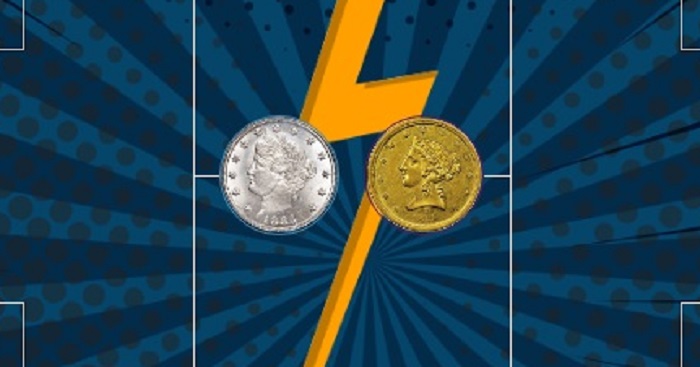 The results for the final matchup in the Clash of the Coins competition are in, and just like politics, economics is a winning platform. As a result, the title for the winner of the Clash of the Coins went to the Dahlonega Mint half eagle gold coin, which defeated its rival, the 1883 Liberty Head V nickel with No Cents.

The path to victory for the Dahlonega Mint half eagle gold coin began with its first victory after going up against the Templeton Reid $2.50 gold coin, and its second after defeating the half disme. Then it came up against the top coin in the History category, the Susan B. Anthony dollar, which it defeated before it moved onto the final matchup against the Liberty Head V nickel. Voters then chose the Dahlonega Mint half eagle gold coin over its rival, and the rest is history.

Now, more in-depth information has been included on the Federal Reserve Bank’s website about all 16 coins that competed for the title.

For the Dahlonega Mint half eagle gold coin, the information segment reads:

Gold was discovered in north Georgia in 1828, and a gold rush ensued by 1829. Private jewelers and metalsmiths minted coins in response to the demand for coinage until Congress passed and President Andrew Jackson signed legislation in March 1835 authorizing the creation of three mints in Charlotte, North Carolina; Dahlonega, Georgia; and New Orleans, Louisiana.

The Dahlonega and Charlotte mints produced only gold coins. New Orleans minted both gold and silver coins. By the 1850s, the gold deposited for minting in Dahlonega came mostly from miners returning from California.

Do you agree with the results of the voting? If not, let us know which coin from the 16 included in the competition you think is the best (and if there is a coin that was not included that you prefer, let us know about that as well)!

Hidden in plain sight: Reverse of the 2018 American Innovation dollar pays subtle homage to the legendary designer of the Buffalo nickel