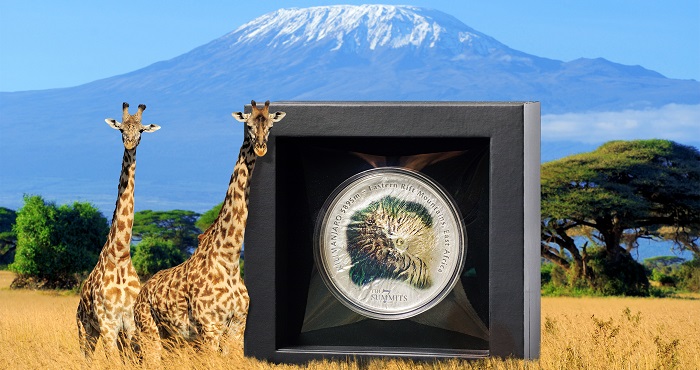 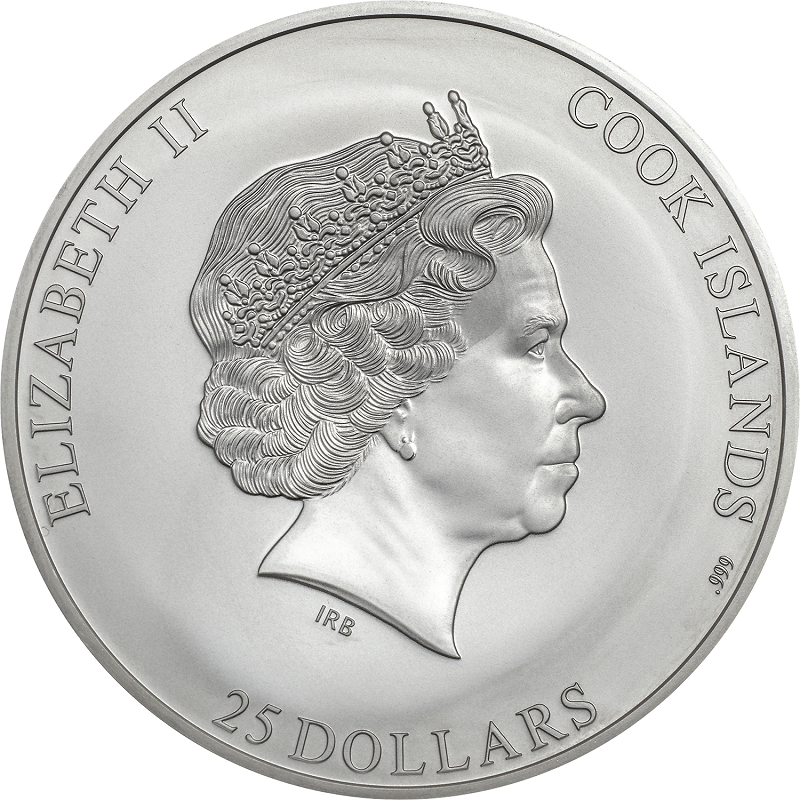 The obverse features the portrait of Queen Elizabeth II by Ian Rank Broadley (signature IRB below the neck). In the right field in micro minting is .999. Around it is the legend ELIZABETH II – COOK ISLANDS – 25 DOLLARS. 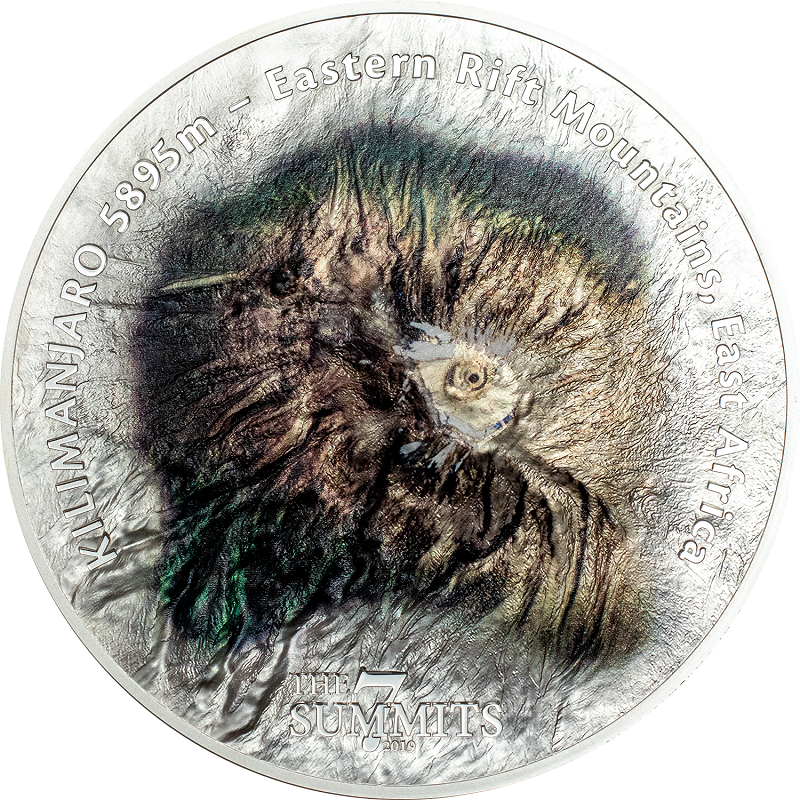 The reverse shows a bird’s eye view of the Kilimanjaro, whose peaks are minted in high relief with partial coloring in brown and green with white toning. The inscription is KILIMANJARO 5895 m – Eastern Rift Mountains, East Africa / THE 7 SUMMITS / 2018. 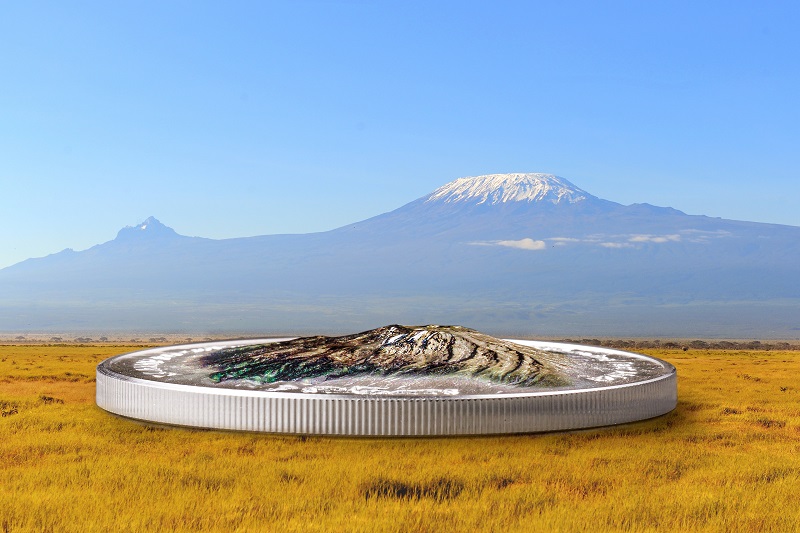 Even though there are higher mountains among the “Seven Summits,” none of them is associated with so many emotions as Kilimanjaro. This is due to German colonial politics and Nobel Prize laureate Ernest Hemingway.

Germans and British competed for the first ascent of “Kibo,” as the summit is called today. Hans Meyer from Leipzig and Ludwig Purtscheller from Innsbruck achieved this in 1889. They brought a piece of the Kilimanjaro peak to the German emperor, which was incorporated in the decoration of the New Palace in Potsdam to symbolize the seizure of German East Africa.

The latter became the most important colony of the German Empire. After the German defeat in World War I, the Kilimanjaro came under British rule. It became a preferred target of English big-game hunters. Famous novelist Ernest Hemingway enjoyed the sublime view of the snow-covered mountain, too, on his journey in 1933. His expedition inspired him to write one of his most famous short stories, “The Snows of Kilimanjaro.” 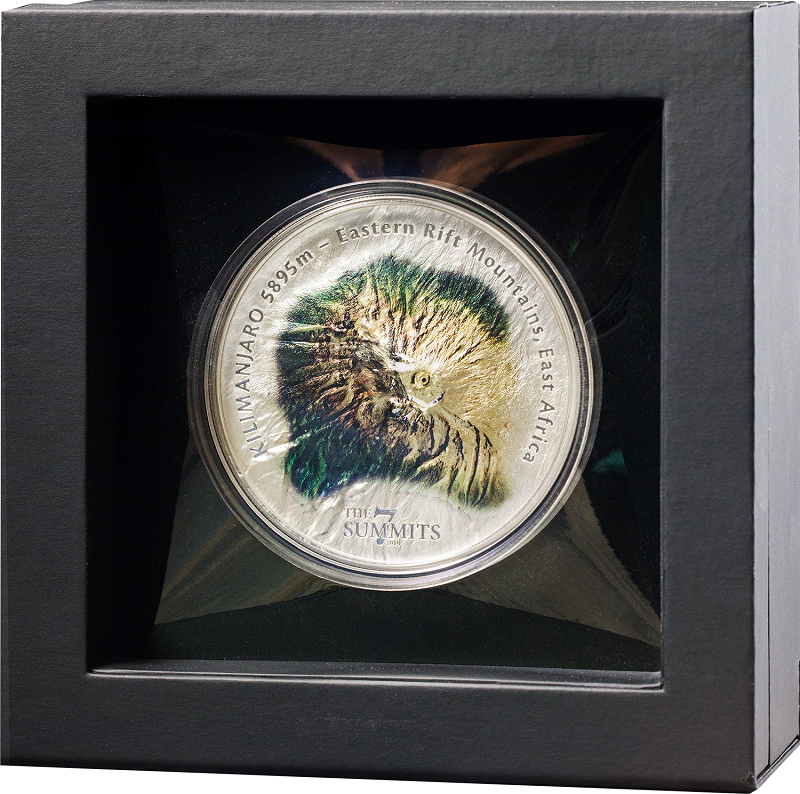 Thus, the Kilimanjaro became a place everybody dreams of and that still attracts countless mountaineers today. With the fourth issue of the award-winning series “The Seven Summits,” CIT Coin Invest sets an extraordinary numismatic monument to this mountain. State-of-the-art smartminting technology makes it possible to meticulously replicate the mountains’ relief for this series for the first time. Thanks to delicate color application, a realistic image of the mountain arises from the coins’ reverse.

Since the previous issues were a great success, this is to be expected for the Kilimanjaro, too. After all, it is not only coin collectors who want to own its image, but everyone who fondly remembers this marvelous massif.

There is a video about this coin showing its elaborate details in three dimensions.